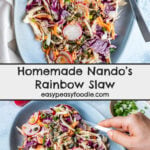 A vibrant mix of cabbage, carrot, radish and spring onions, topped with mixed seeds, this delicious coleslaw is an easy homemade version of Nando’s Rainbow Slaw… except I’ve tweaked it to make it taste EVEN BETTER! 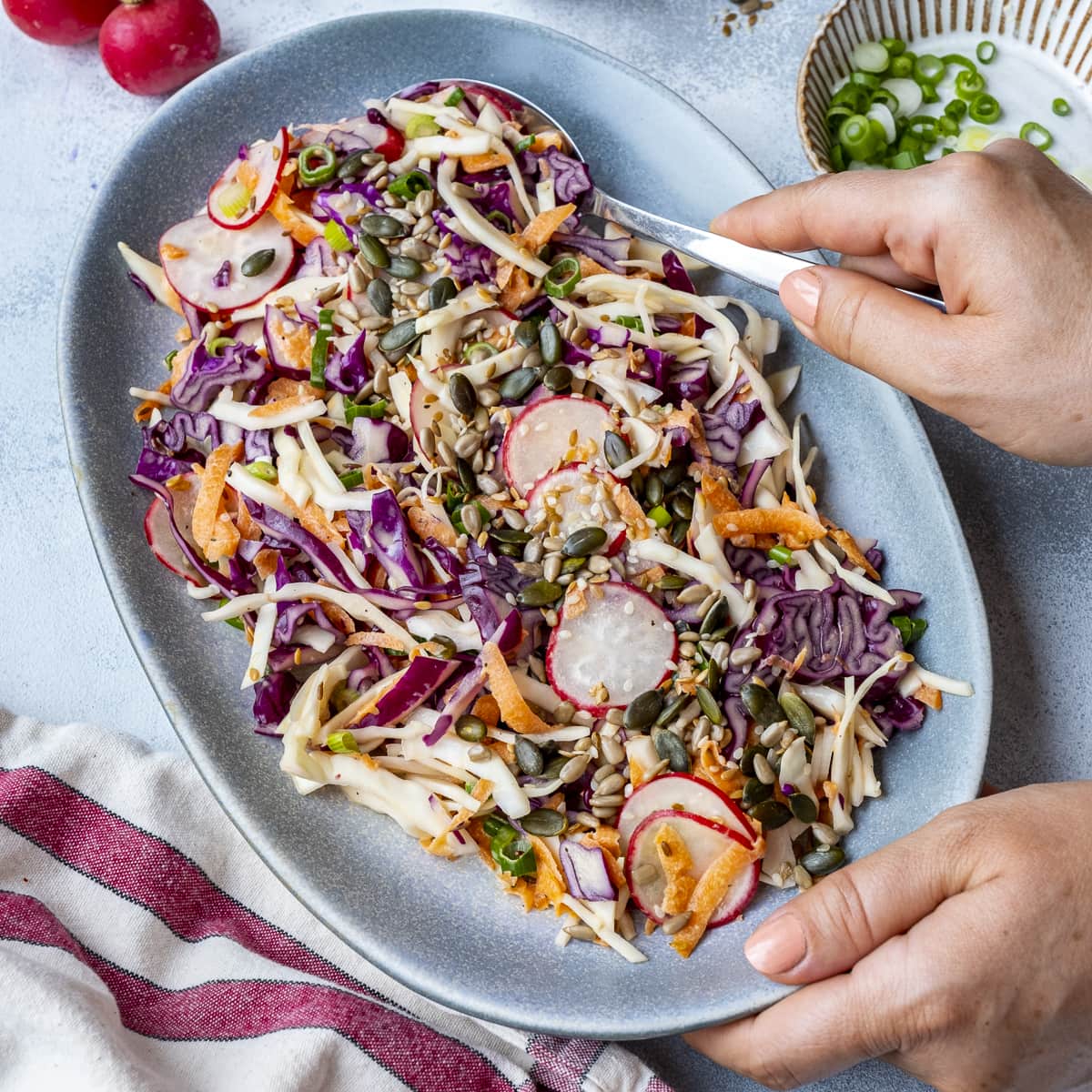 A Nando’s favourite – made even better!

It’s no secret that I am a big fan of Nando’s. I love eating in Nando’s restaurants and I really love recreating my Nando’s favourites at home! One of my favourite sides at Nando’s is their Rainbow Slaw. I just love that vibrant combo of red and white cabbage, carrots and radishes, topped with a generous sprinkle of mixed seeds.

Usually when I make my Nando’s fakeaway recipes, I try to stick as close as possible to the original, but in this particular instance I’ve made a couple of tweaks, which I hope you’ll agree make this classic Nando’s side even better! The first is I’ve slightly tweaked the dressing to make it just a little less ‘tangy’ and a touch more creamy. The second is I’ve added a little finely sliced spring onion. 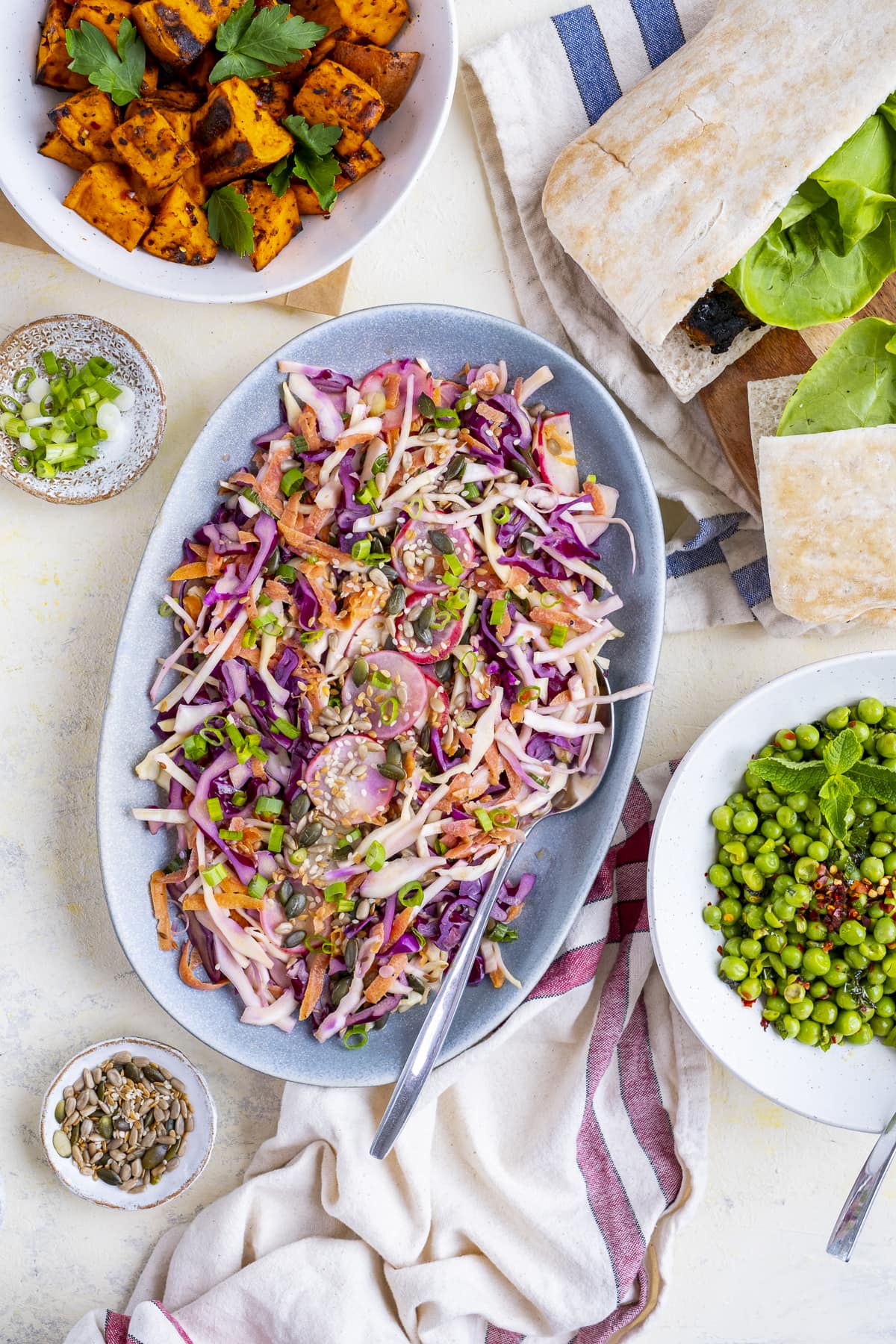 And of course, as you’d expect from me, the recipe for this Nando’s-style Rainbow Slaw is very quick and simple to make. (And it’s all made in one bowl, to cut down on the washing up!)

All you need to do is mix mayo, vinegar, salt and pepper in a bowl – to make the dressing. Then add grated carrot, cumin seeds, sliced cabbage, spring onions and radishes. Give it a quick stir and top with mixed seeds. Easy peasy! 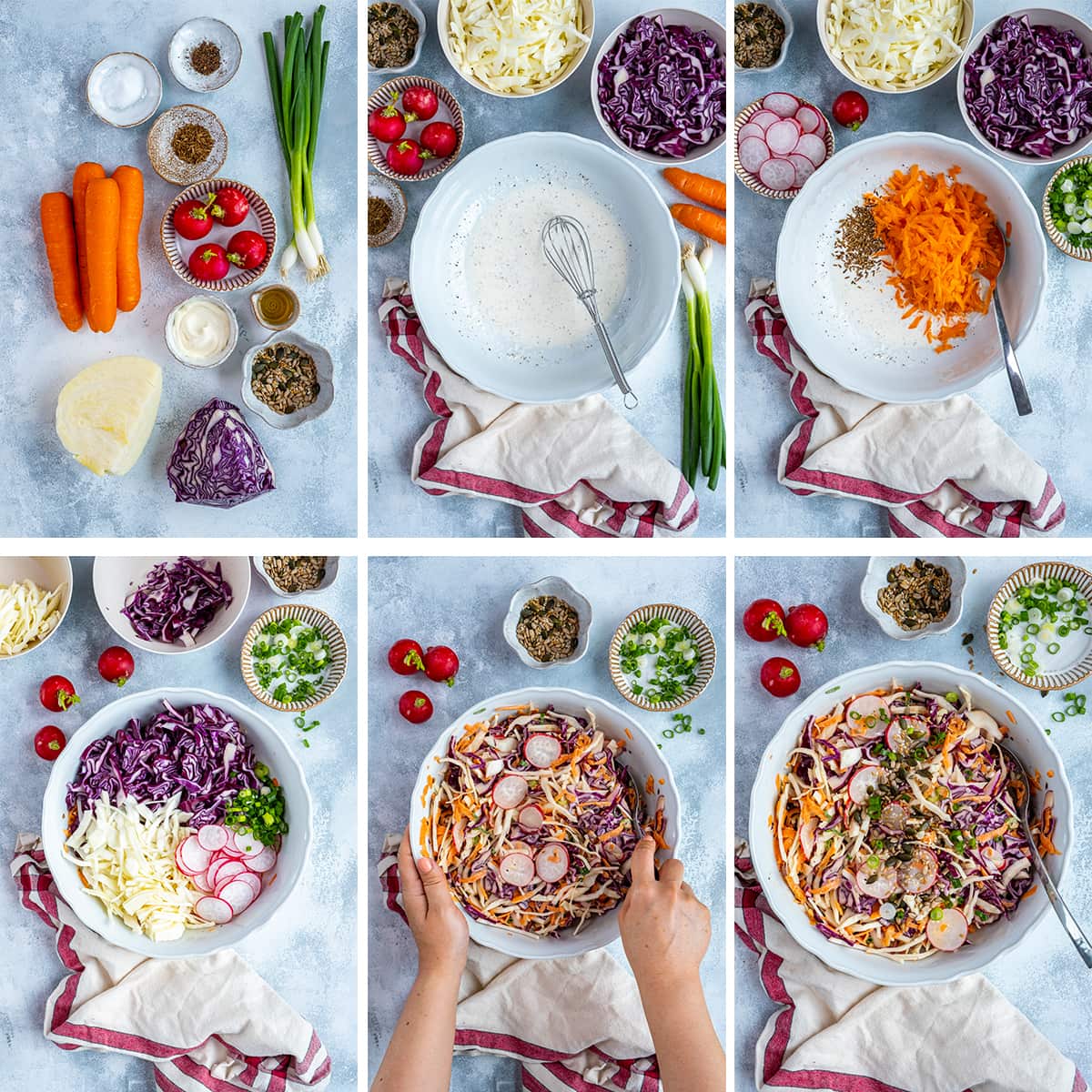 If you’ve ever tried the Rainbow Slaw in a Nando’s restaurant, you’ll know there’s a slightly spicy flavour in there that’s hard to put your finger on… well I can’t be 100% certain, but I’m pretty sure it’s cumin. In any case, I’ve added just half a teaspoon of cumin seeds to my Rainbow Slaw recipe and it really works (but feel free to leave it out if you are not a cumin fan!)

What to serve with Rainbow Slaw?

It also works wonderfully with roast chicken, ham, pulled pork and pan-fried salmon. And of course it makes a great option to serve at a barbecue, pot luck, buffet, party or picnic. 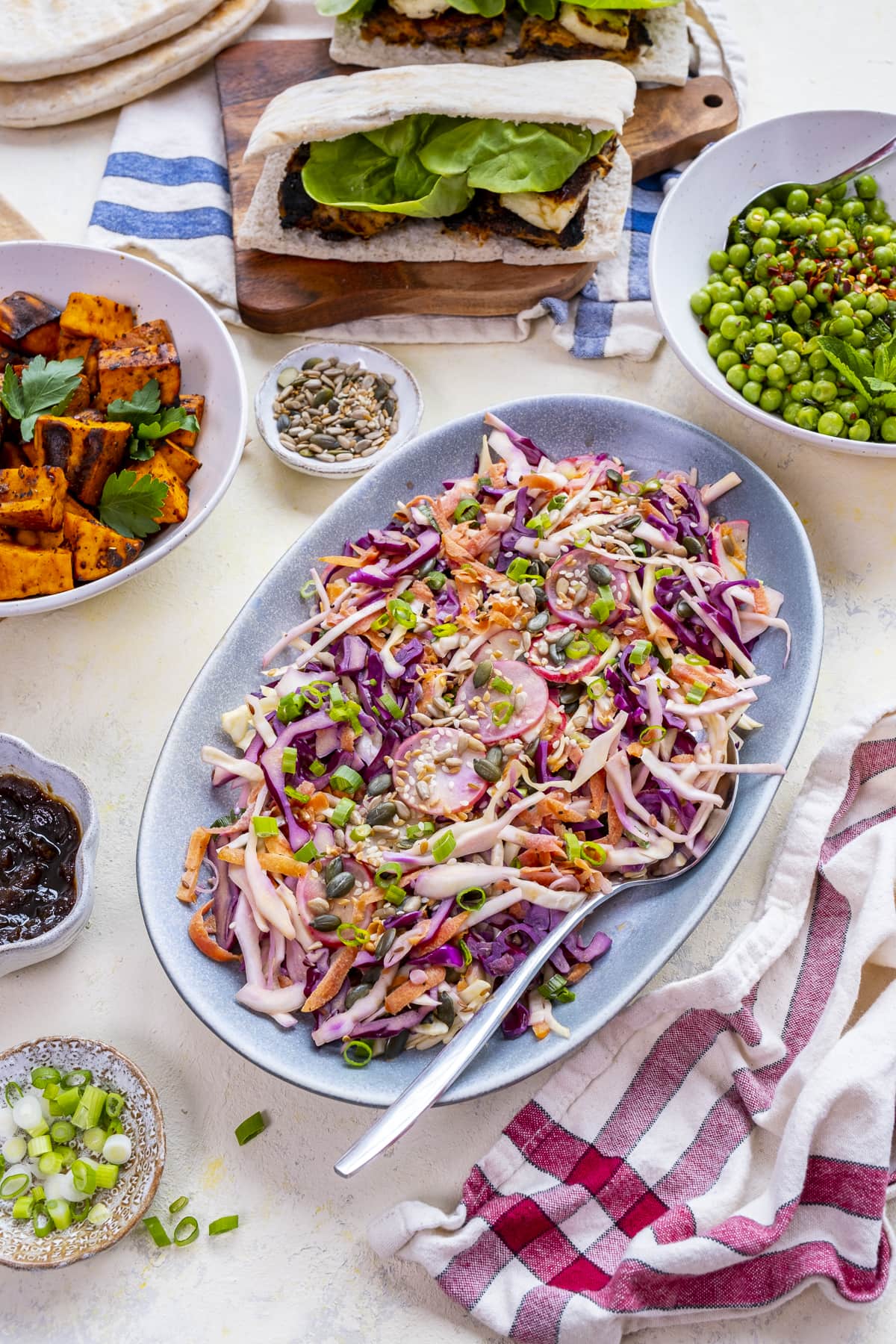 What to do with leftover Rainbow Slaw?

As is often the case with coleslaw, this Rainbow Slaw tastes just as good the next day, if not better! This means it’s a great make-ahead side, and perfect for picnics and lunchboxes. (As well as transporting to buffets, parties, potlucks etc.)

Put any leftover Rainbow Slaw in a lidded container and place in the fridge, where it will keep for up to 3 days.

Can you freeze Rainbow Slaw?

No, Rainbow Slaw is not suitable for freezing. 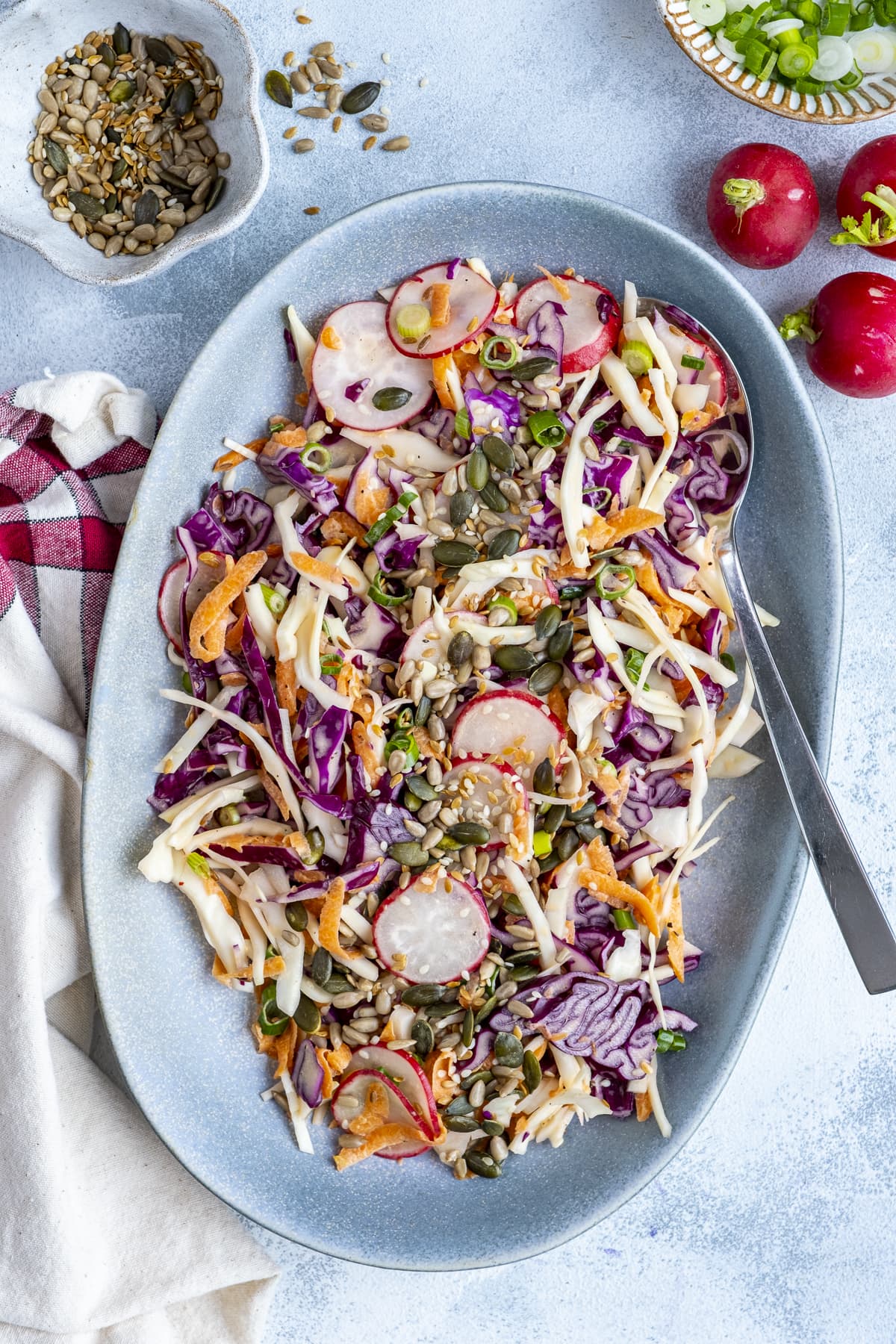 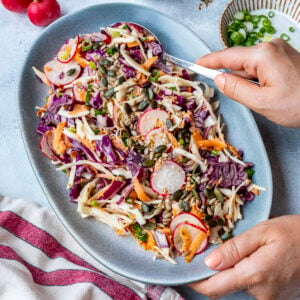 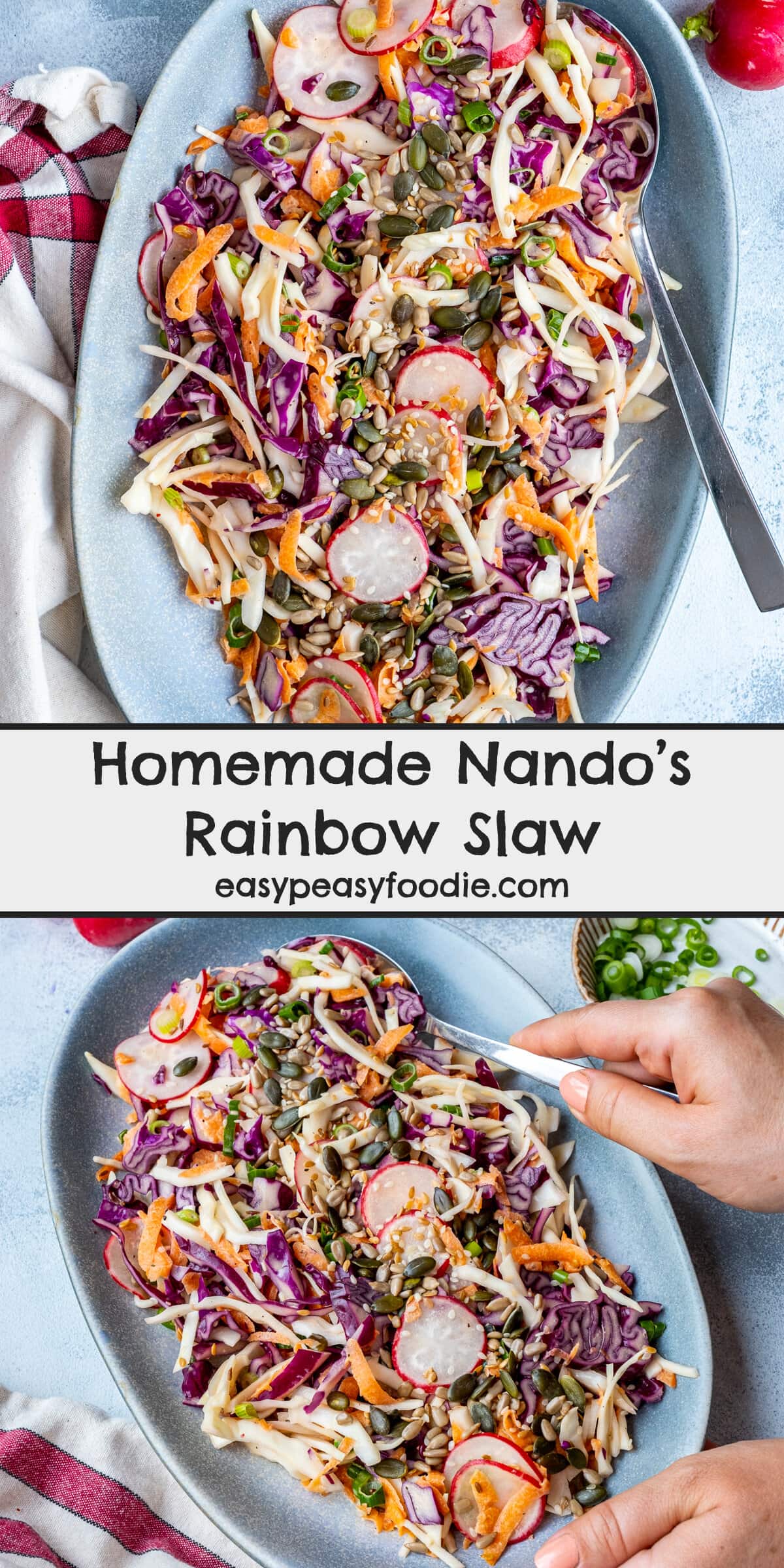