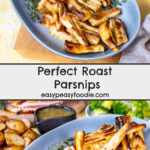 Quick, easy and delicious, this recipe for Perfect Roast Parsnips requires no par-boiling or any other tricks – but it delivers perfectly cooked and crispy roasted parsnips every time. Perfect for roast dinners, Christmas lunch… or any time when you fancy perfectly roasted parsnips! 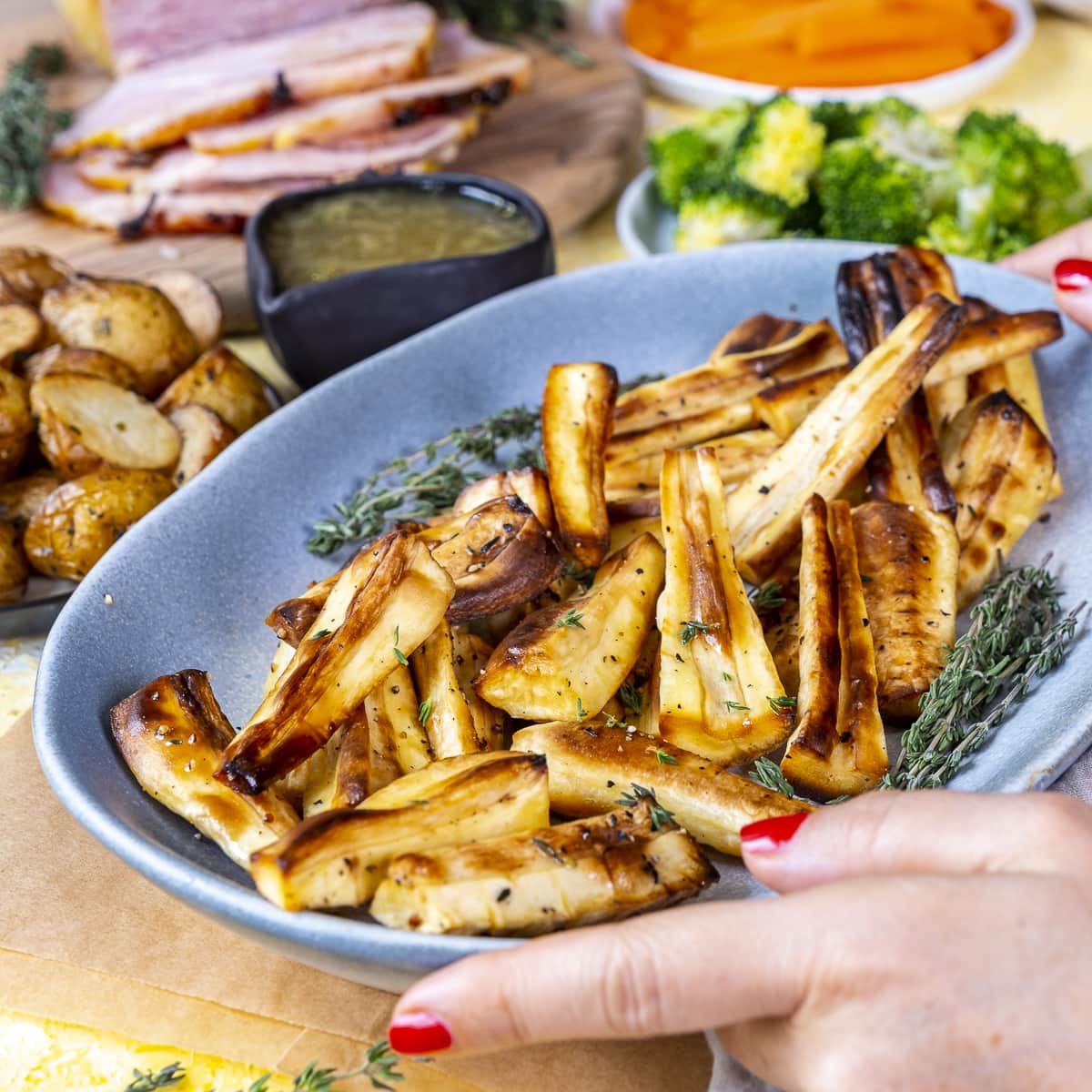 Roast parsnips are definitely one of my favourite vegetables! They are delicious as part of a regular Sunday roast… and an essential part of Christmas dinner in the Gargano household. (There would be MUTINY if I didn’t make any for Christmas dinner!)

In fact, roast parsnips are such a favourite round here that I often make them midweek too! But the universal law of roast parsnips dictates that – no matter how many roast parsnips I make – THERE ARE NEVER ENOUGH! (Tell me it’s not just us?) 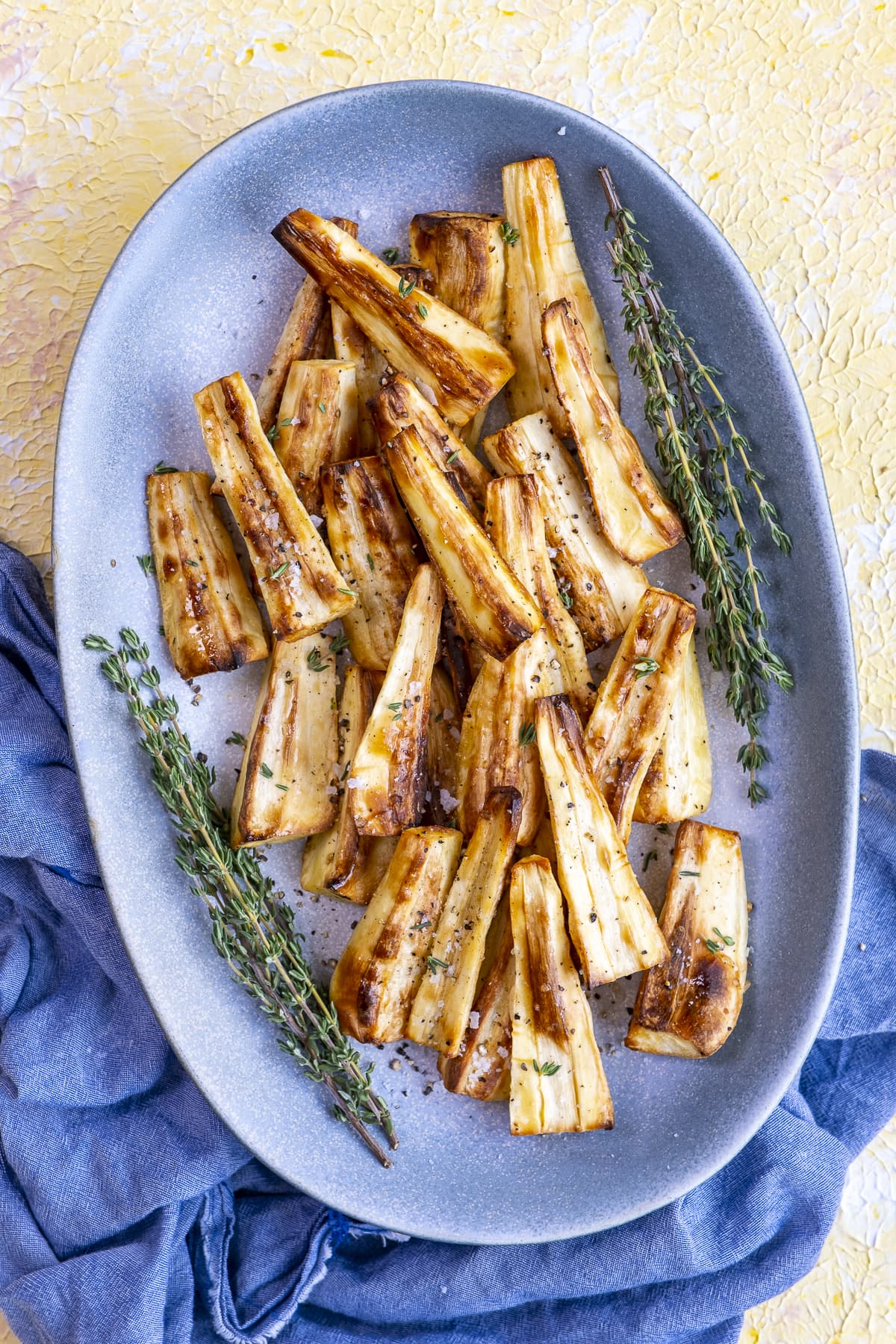 How to cook perfect roast parsnips…

This recipe is awesome for two reasons… First of all, it is super simple (no par-boiling needed!) And secondly because it’s virtually foolproof and always delivers perfectly cooked and crispy roasted parsnips every time!

All you need to do is place the prepared parsnips in a shallow roasting tray, drizzle with olive oil and scatter over salt and pepper. Then, toss everything together, so the parsnips are well coated and arrange in one layer. Finally, place the parsnips in a preheated oven and roast for 30 minutes, turning once. 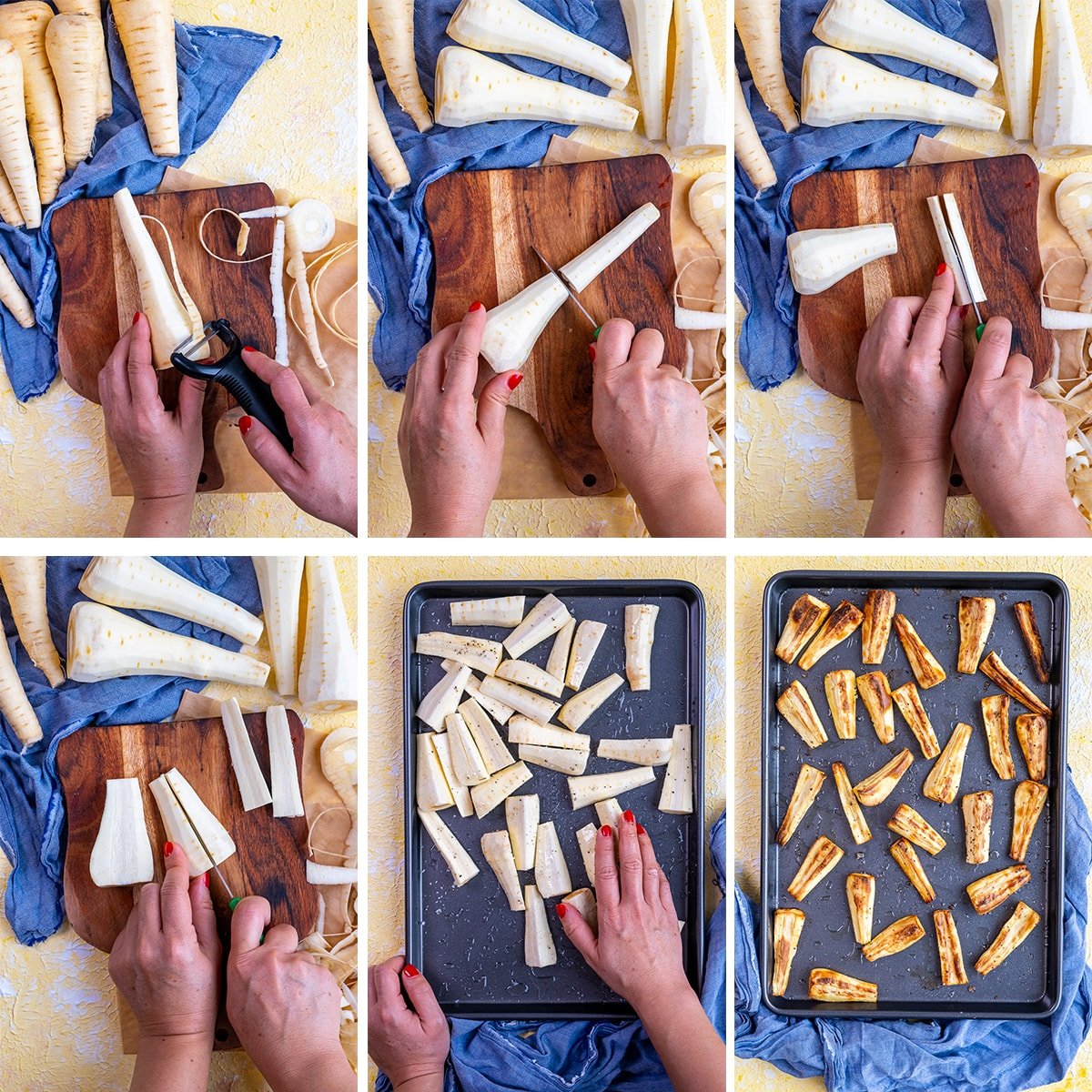 One super important factor in ensuring roast parsnip perfection is to make sure the parsnips are well spaced out in the roasting tray.

Ideally none of the parsnips should be touching each other and definitely don’t have more than one layer! Otherwise, the parsnips will steam rather than roast – resulting in soggy soft parsnips, not crispy roasted ones! 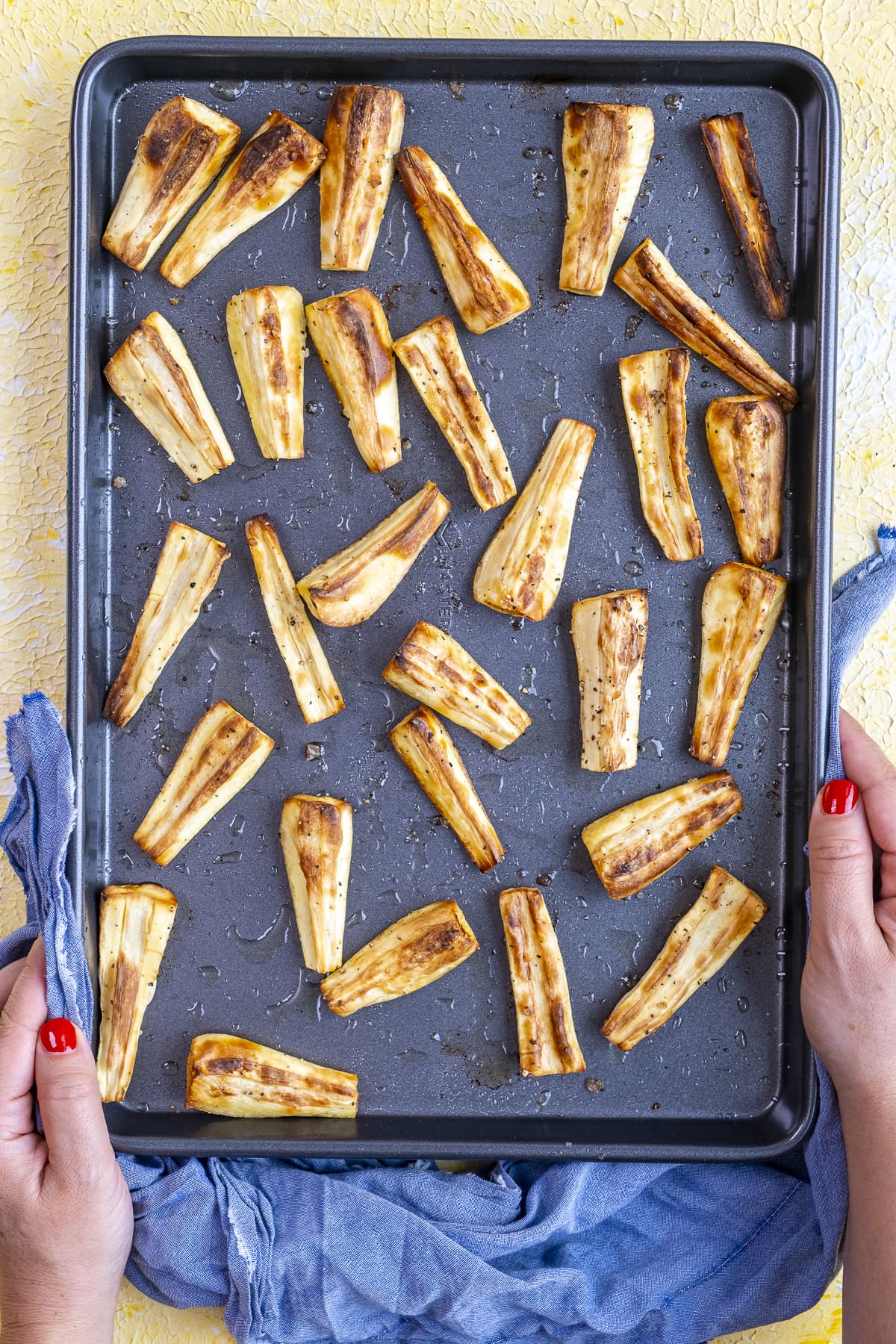 How to cut perfect roast parsnips…

If you want perfect roast parsnips, you need to cut then right… Cut parsnips for roasting so they are all a similar size and shape. This means you don’t get some burnt and others still half raw. However, this can be tricky given their tapered shape!

The way I do it is to select medium sized parsnips (so much easier if all the parsnips are all roughly the same size) and cut them in half widthways. The top half I cut into 4 lengthways and the bottom I cut into 2 lengthways – this creates 6 roughly equal sized parsnip batons, which will roast beautifully. 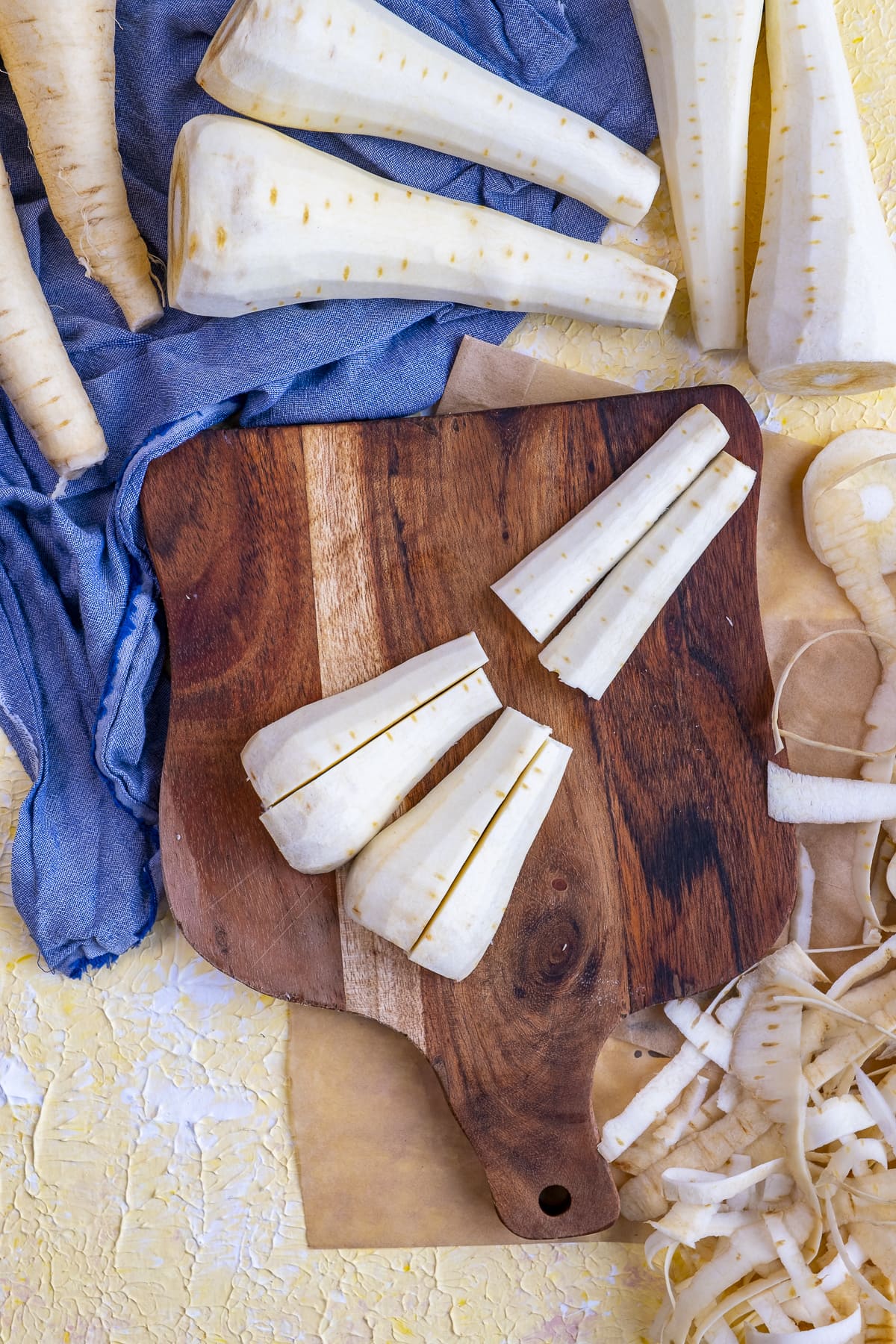 What is the correct oven temperature for roast parsnips?

It does depend a little on how big you cut them of course, but I find that parsnips actually cook quite quickly in the oven and so if you cook them at lower temperatures, they are fully cooked before they have a chance to go all crispy. Again, resulting in soggy, mushy parsnips – not crispy crunchy ones!

Should you par-boil roast parsnips?

In a word no! Roast parsnips do not need par boiling. If you do, you will find your parsnips will end up more steamed than roasted. They don’t taste nearly as nice and the texture is soggy rather than crispy.

If you cut your parsnips into batons and cook them on a reasonably high heat there is no reason to par boil them. 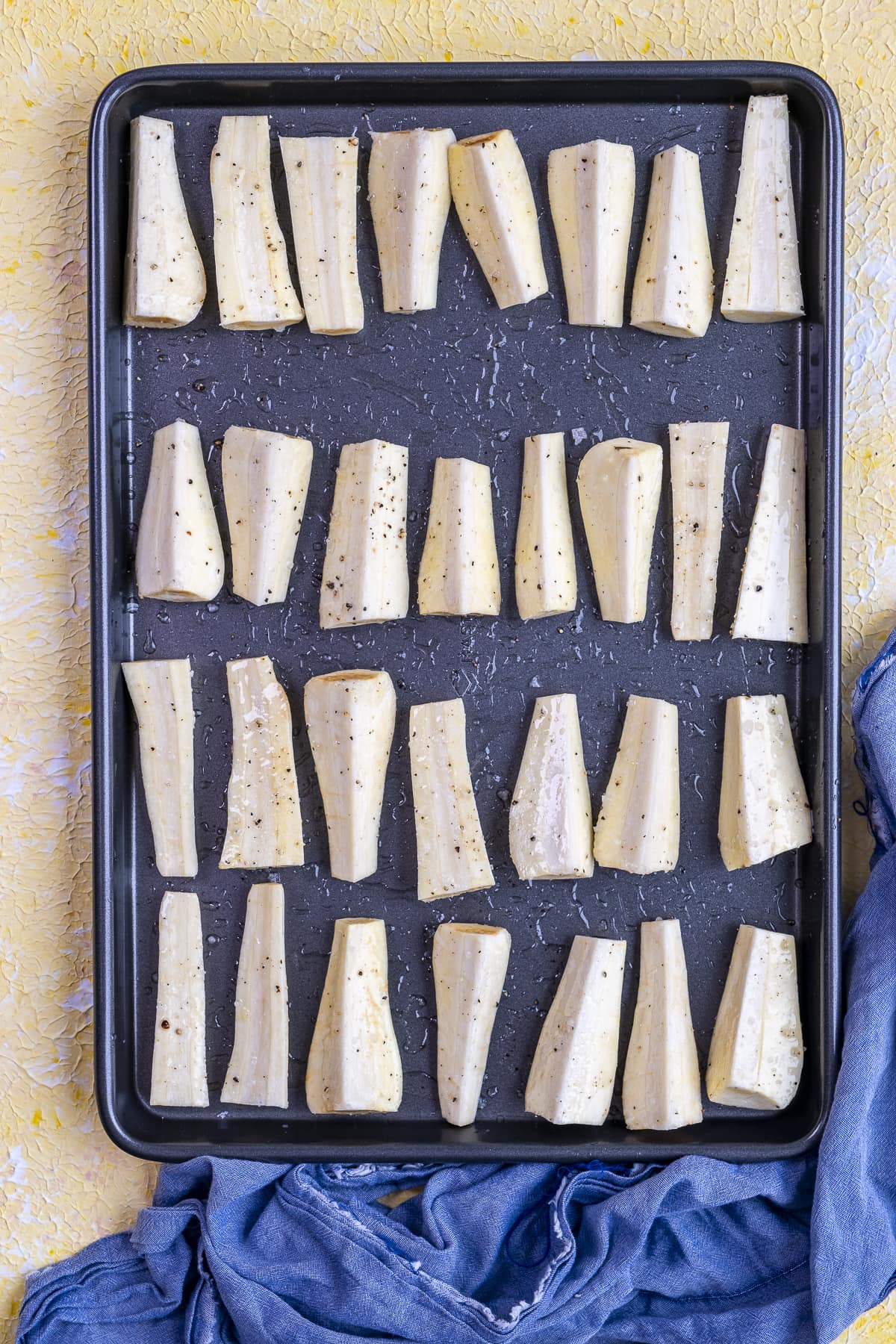 How to flavour roast parsnips?

Roast parsnips are lovely just as they are, roasted in just a little oil, salt and pepper. But if you want to take things up a notch then there are lots of flavours you can add to make them even more delicious.

For example, honey, maple syrup, mustard, or one of my all-time favourites honey AND mustard (check out my Honey Mustard Roast Parsnips recipe).

Honey and thyme is also a wonderful combo – such as in my super popular Roast Parsnips with Honey and Thyme recipe.

You can also add spices, such as cumin, coriander, cinnamon – like I have in this roasted roots recipe.

And herbs, such as thyme, sage, rosemary, all work very well with parsnips too.

And of course, garlic and chilli – which go with nearly everything – also pair well with parsnips! 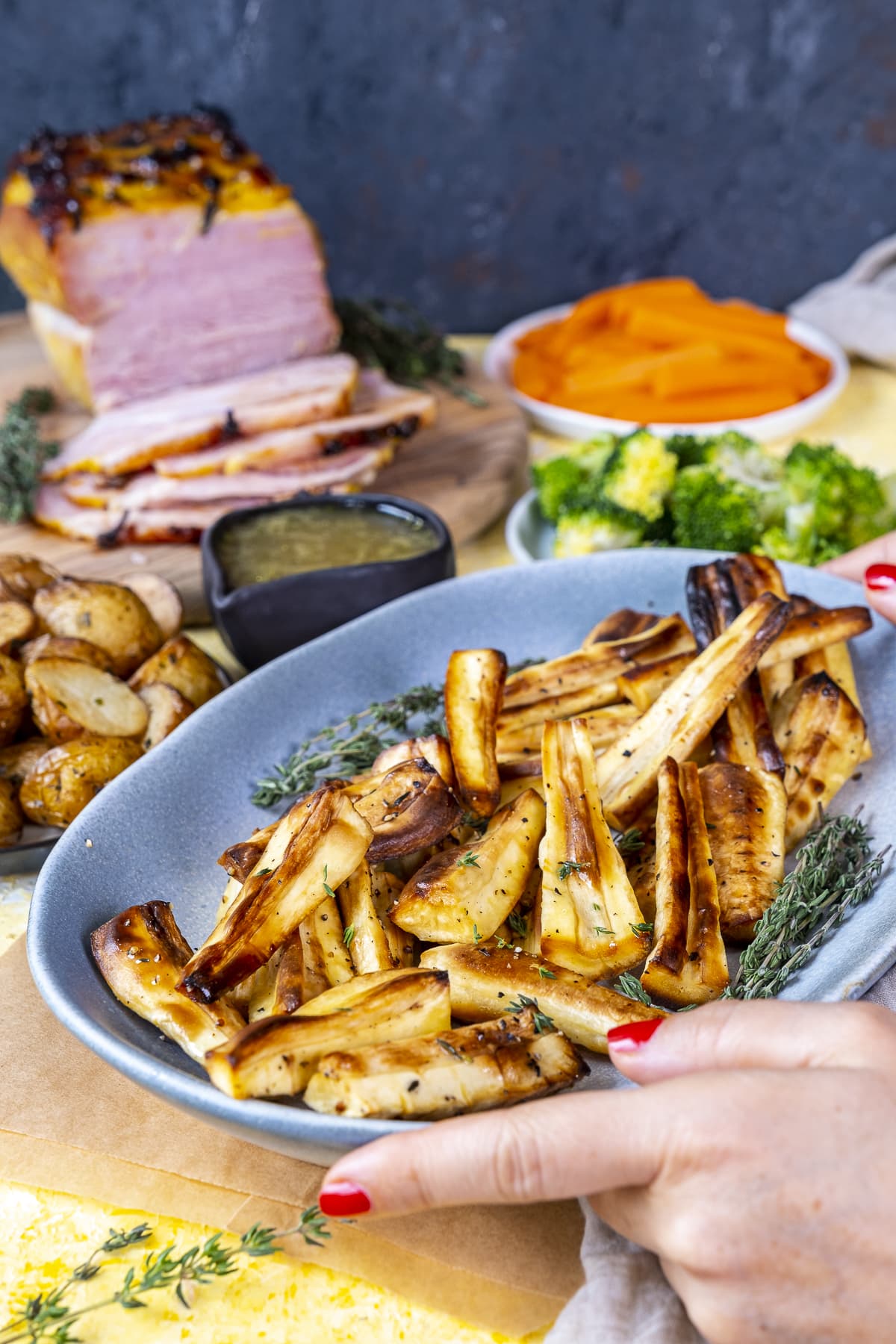 What to serve with roast parsnips?

These Perfect Roast Parsnips go well with any roast dinner but especially:

And of course they are especially good at Christmas – for example with: 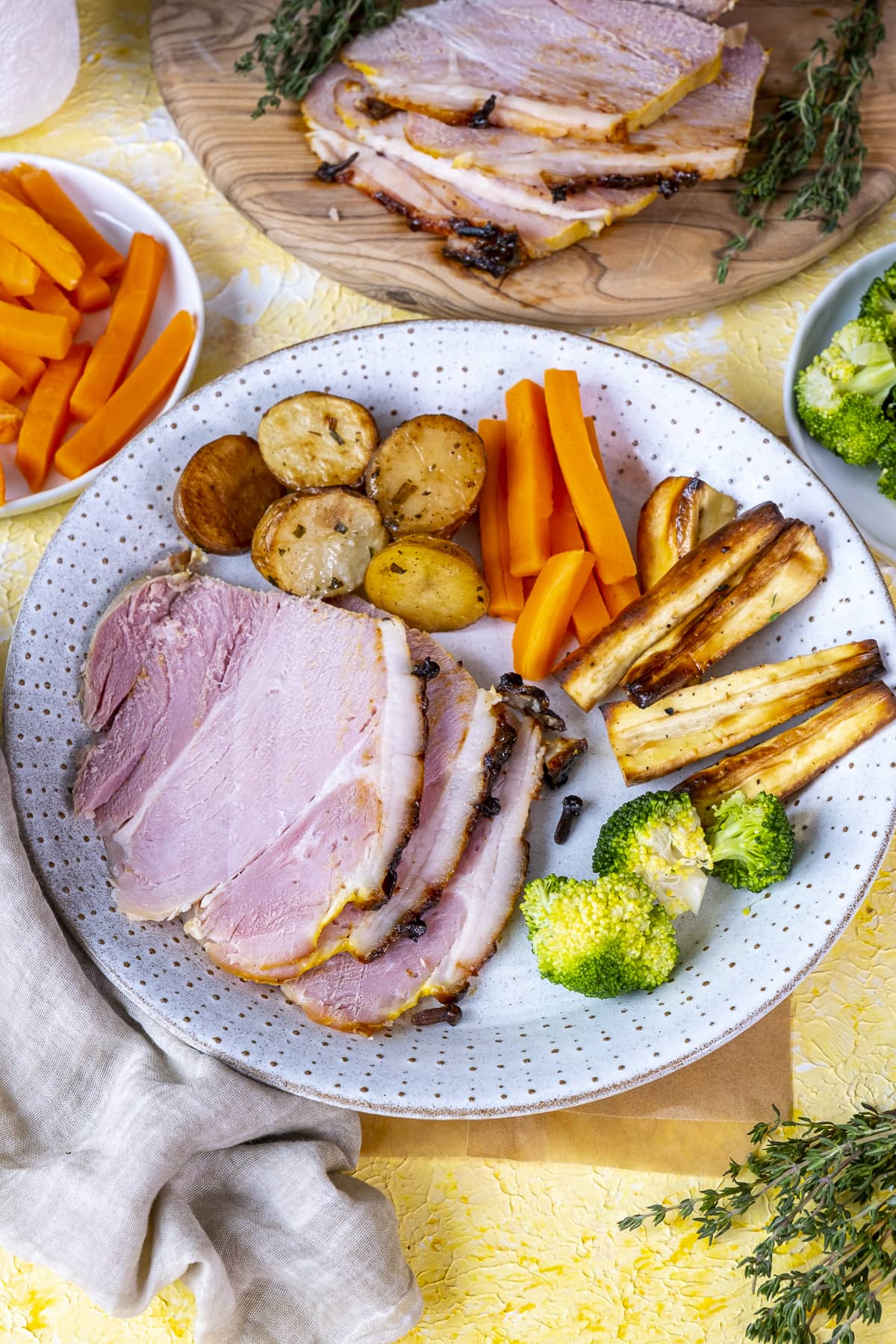 What to do with leftover roast parsnips?

Well, for the reasons I explained above, this isn’t really a problem in our house! But if parsnips are less popular in your house, I have a couple of ideas for your leftover roast parsnips…

If you have a lot of roast dinner leftovers then this Leftover Turkey and Vegetable Pie, would be a great choice – and so simple! Just chuck your leftovers into a pie dish with a creamy sauce and cover with pastry and voila – your roast dinner leftovers have turned into a delicious new meal! (It can be made with any meat, it doesn’t have to be turkey.)

Alternatively, you could add your leftover roast parsnips to these delicious bubble and squeak cakes, which can be made using any vegetable leftovers from a roast dinner.

Can you freeze roast parsnips?

Yes you can! Freeze cooked and cooled roast parsnips in a single layer. Once frozen, put the parsnips in a lidded container or freezer bag, where they will keep for up to 3 months.

Can you reheat roast parsnips from frozen?

Yes! Roast parsnips can be reheated straight from frozen. Simply tip onto a baking tray, ensure they are well spread out and in a single layer, then place straight in the oven – preheated to 220C / 200C fan / gas mark 7 / 425F.

Roast for 5-10 minutes, or until piping hot all the way through (Take care not to burn them, though!)

DO NOT reheat in the microwave – they will go soggy not crispy. 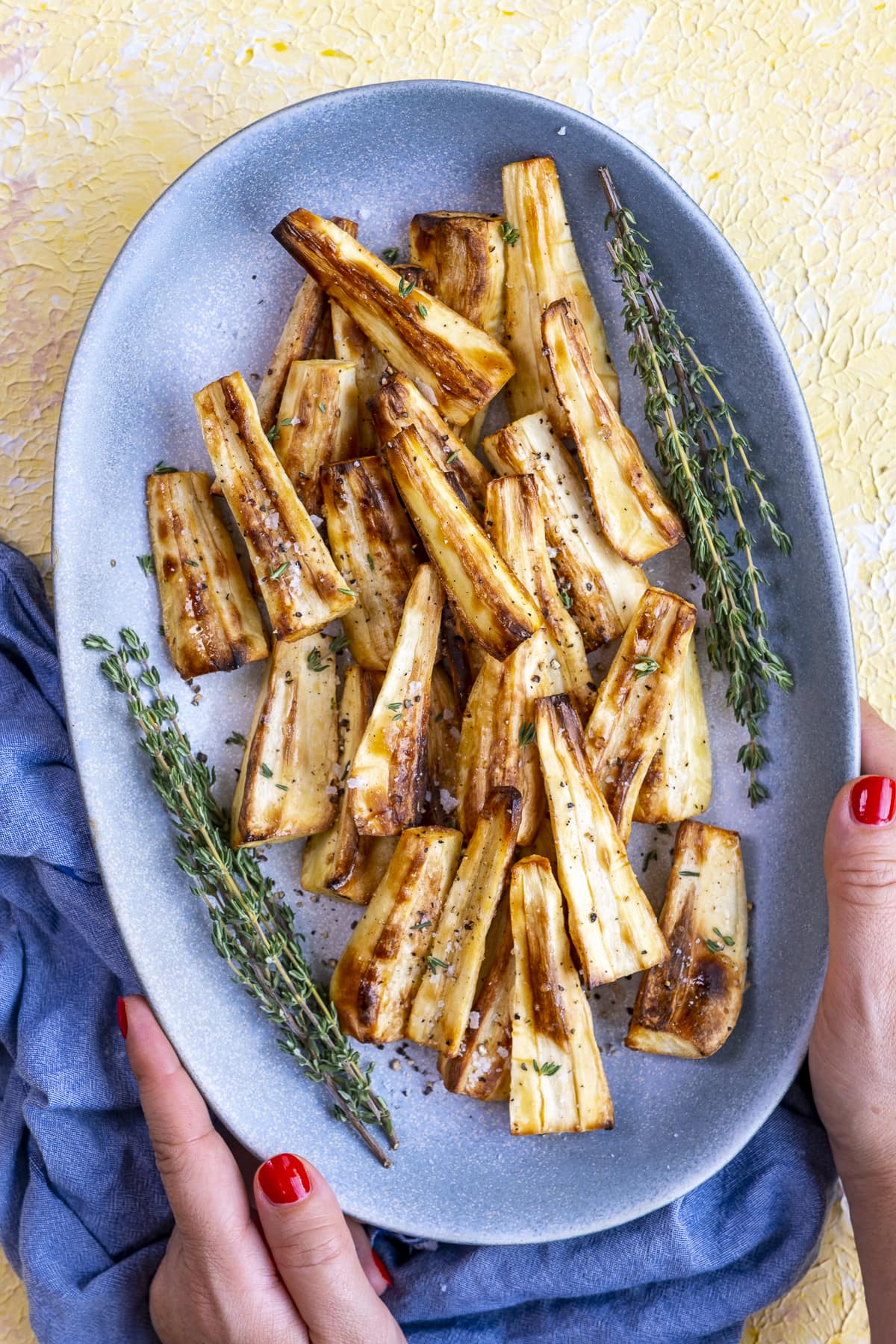 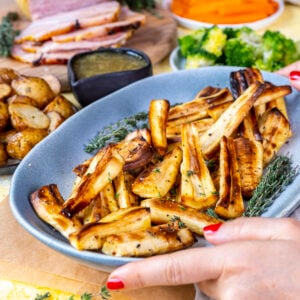 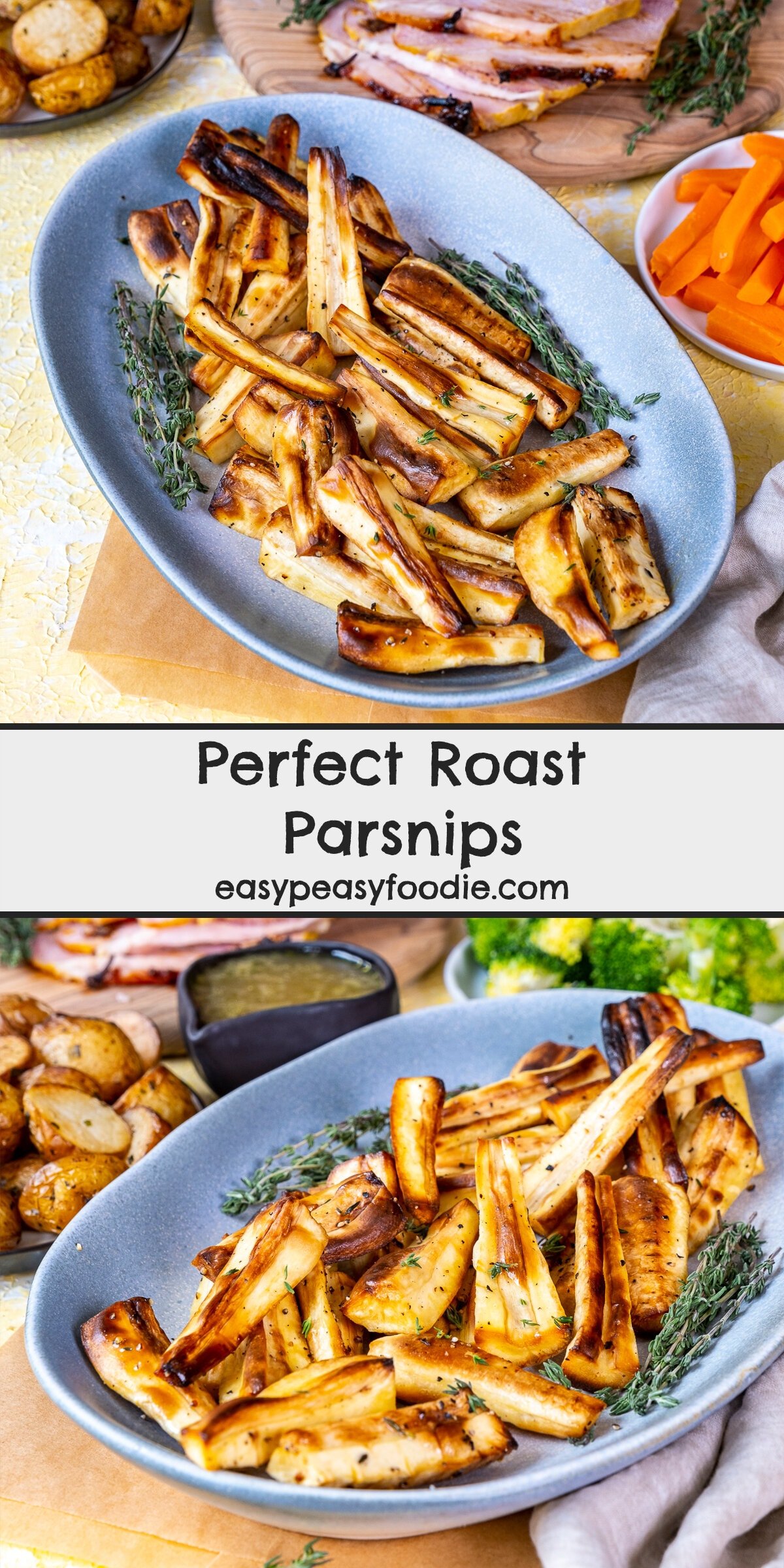