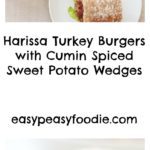 These Harissa Turkey Burgers are easy to make and super tasty – serve them with Cumin Spiced Sweet Potato Wedges and a simple Middle-Eastern inspired salad for a healthy, but totally delicious alternative to the usual beef burger and chips, and all in under 30 minutes!

A few weeks ago I was contacted by British Turkey and asked to come up with an innovative dish with the theme ‘Best of British’ – which is how I came up with my delicious Turkey Tikka Masala Meatballs, using turkey mince flavoured with garam masala to make the meatballs and creating a simple coconut milk based curry sauce to serve them in. It went down a storm in our house and I think it’s all set to become a firm family favourite. 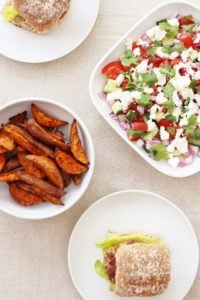 I really loved working with turkey mince so much, that I wanted to make something else with it. One of the ideas I had considered when creating the dish for British Turkey was to make turkey burgers and I still really wanted to give these a try. I discovered with the Turkey Tikka Masala Meatballs, that turkey is a really great flavour carrier and I wanted to see what other flavours turkey would work well with. 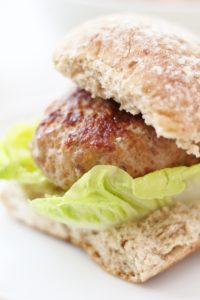 One of my favourite flavours to work with, at the moment, is harissa – a spicy, fragrant paste from North Africa – and so the idea of making Harissa Turkey Burgers began to develop in my head. Before long it had been joined by the idea of serving them with Cumin Spiced Sweet Potato Wedges and a simple Middle-Eastern inspired salad, to create an easy peasy, healthy, Middle-Eastern take on burger and chips. 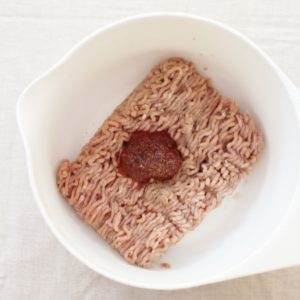 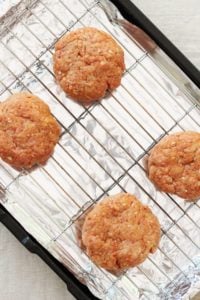 I tested out my ideas and was pleased to bits that it worked out brilliantly – I shouldn’t really have been surprised – it would have been hard to go wrong with such fab flavours. 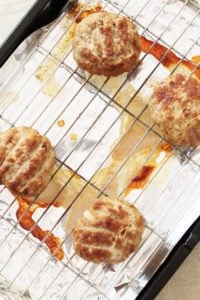 I really like working with the turkey mince – it is such a joy to make meatballs and burgers with, and makes a lovely, healthy alternative to the usual beef burger. To make this meal even healthier, I swapped the usual white burger buns for brown – but if you are trying to cut down on carbs, you could miss these out altogether and enjoy a bunless burger – perhaps served on a lettuce leaf instead. 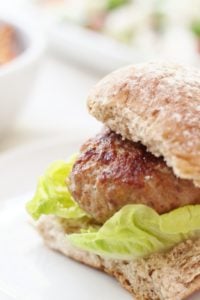 The Cumin Spiced Sweet Potato Wedges are an adaptation of my Homemade Sweet Potato and Smoked Paprika Chips. If you are not a fan of cumin, you could sprinkle over some smoked paprika, chilli flakes or cayenne pepper instead – or why not try a mixture? 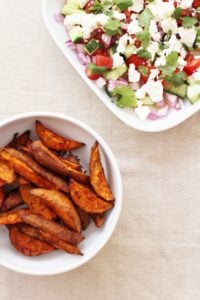 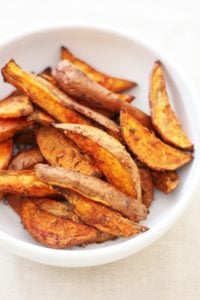 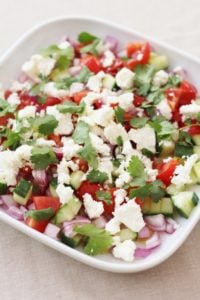 I think a gutsy French or Spanish rosé would be a good wine choice here or, if you prefer red, a Grenache based Southern French red would also work well. 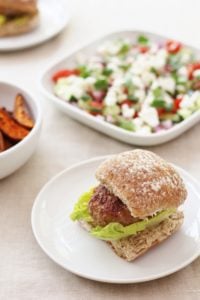