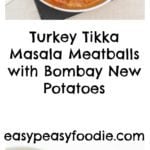 A British classic with a twist, these easy Turkey Tikka Masala Meatballs showcase British produce at its best. Delicious with Bombay New Potatoes and Courgette Salad. 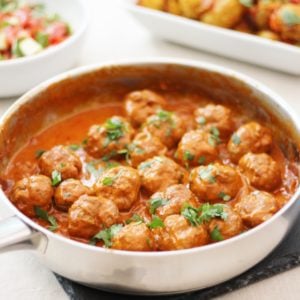 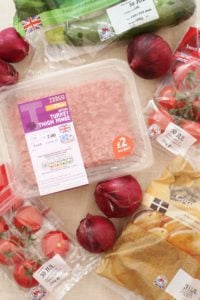 Talk about a tough challenge! It was time for me to get my thinking cap on…I thought of lots of lovely British Turkey ideas: pies, sandwiches, a stew or some kind of roast, but none of them were particularly innovative… 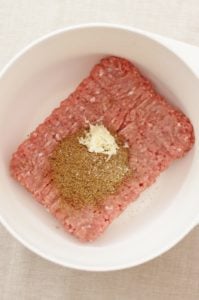 So I decided to do some ‘research’ and look at a few lists of favourite British foods on the internet…and they were full of dishes such as spaghetti bolognese, paella, chilli con carne, fajitas and of course tikka masala! It struck me that one of the best things about being British is the way we embrace other cultures and recipes and create hybrid recipes such as spaghetti bolognese or chicken tikka masala, which are influenced by ideas from abroad, but just as British as a Sunday roast. A dish most certainly doesn’t have to be ‘meat and two veg’ to be British! 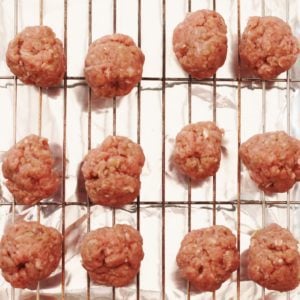 So with this in mind, I have created a dish that reflects our very British passion for fusion food: Tikka Masala is an Anglo Indian dish, whilst meatballs are a hugely popular import from Italy via America – the result: Turkey Tikka Masala Meatballs! 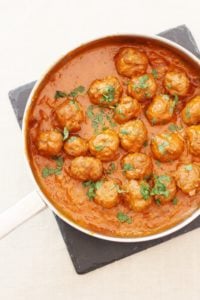 These Turkey Tikka Masala Meatballs would be a great quick and easy midweek meal in their own right, served with white or brown rice and maybe a little Indian-style side salad. But I wanted to go one step further and create a bit of a feast, using some of the lovely Red Tractor produce I had picked up from the supermarket. So I have also made a simplified version of another Anglo-Indian classic: Bombay Potatoes, using some delicious Red Tractor Cornish new potatoes, instead of the usual ‘old’ potatoes, Red Tractor red onions and some wonderful Red Tractor tomatoes from Kent. 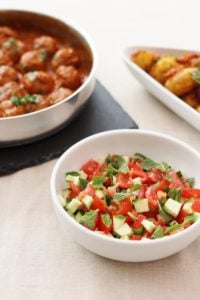 Finally, I created a simple, yet super tasty salad using the rest of the Red Tractor tomatoes and a Red Tractor courgette. If you haven’t tried raw courgette in a salad yet, you have been missing out – it has the most delicious flavour and paired with the tomatoes and a touch of lemon and mint it makes an amazingly refreshing salad – the perfect contrast to the spicy flavours of the tikka masala and bombay potatoes. 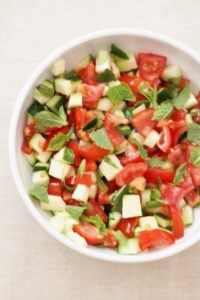 If you really want to go to town, you could also throw in some naan breads and maybe a pickle, chutney or raita and you have yourself a party! I absolutely love meals like this that you can dress down for midweek and dress up for the weekend or a dinner party. 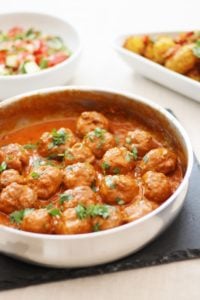 This recipe for Turkey Tikka Masala Meatballs with Bombay New Potatoes is my entry into the #TurkeyTractorChallenge competition, run by British Turkey and Red Tractor.

To find out more about British Turkey go to www.britishturkey.co.uk

To find out more about Red Tractor go to www.redtractor.org.uk