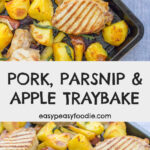 This is a great meal to make when you want all the flavours of a roast pork dinner… but none of the hassle. This simple Pork, Parsnip and Apple Traybake is essentially a pork roast dinner made in one tray! Delicious pork chops cook on top of roast potatoes, parsnips and apple, with crispy sage and caramelised onions, for a weeknight treat that is ready in under an hour. 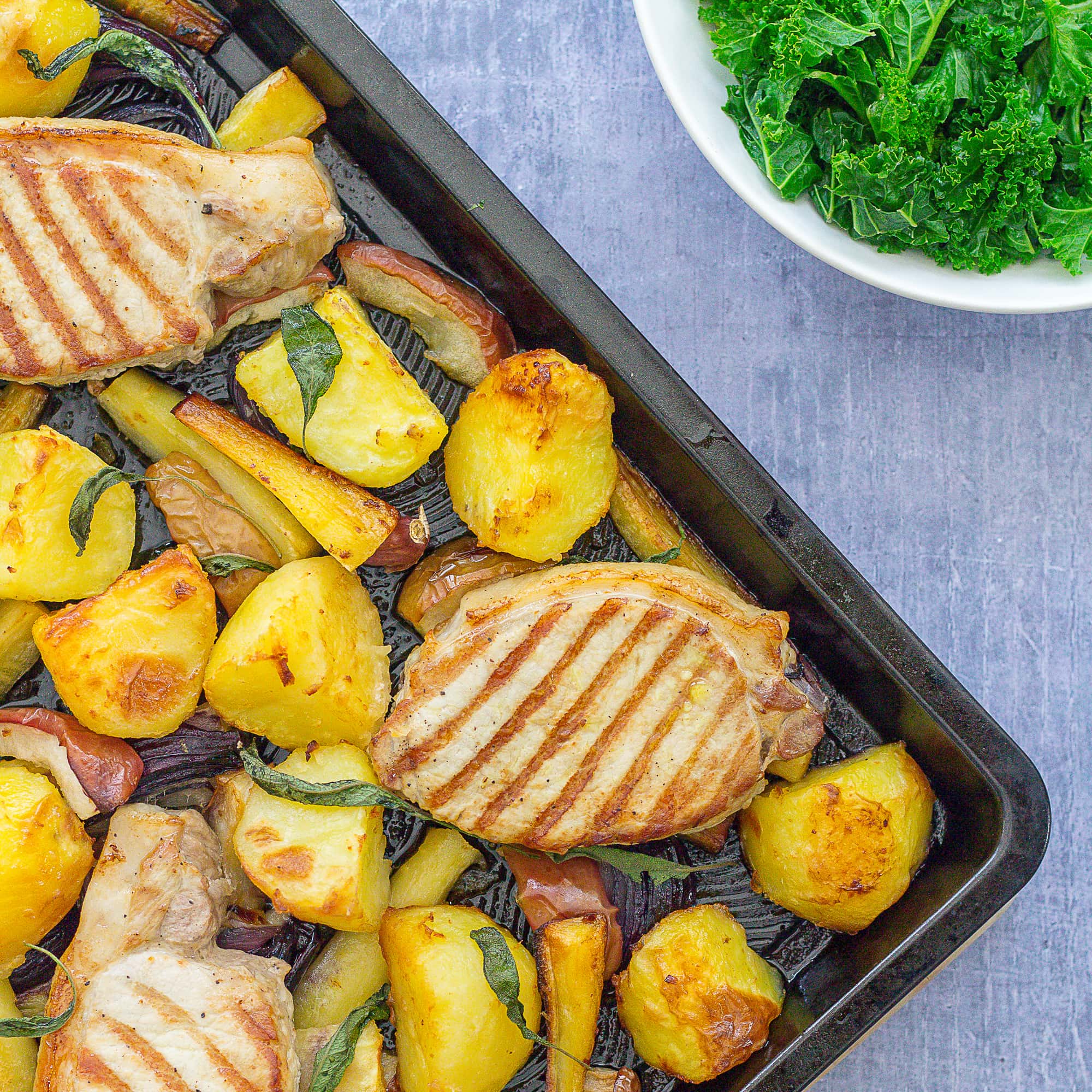 Pork gets the traybake treatment…

If you read this blog often, you will know I love traybakes – I love any recipe that involves putting lots of delicious ingredients in one tin, then letting the oven do the hard work! This Pork, Parsnip and Apple Traybake came about because I had done lots of chicken traybakes and sausage traybakes and I began to wonder what else might work…

One of my favourite cuts of meat is pork chops, I usually do these in a frying pan, but I wondered if they might work when given the traybake treatment. The answer is they absolutely do, but only if you sear the chops in a frying pan first. Technically, you can miss out this step (in which case, I’d add them to the traybake 5 minutes earlier than the recipe states), but they really do taste miles better if you sear them in a hot griddle pan (or normal frying pan) first. 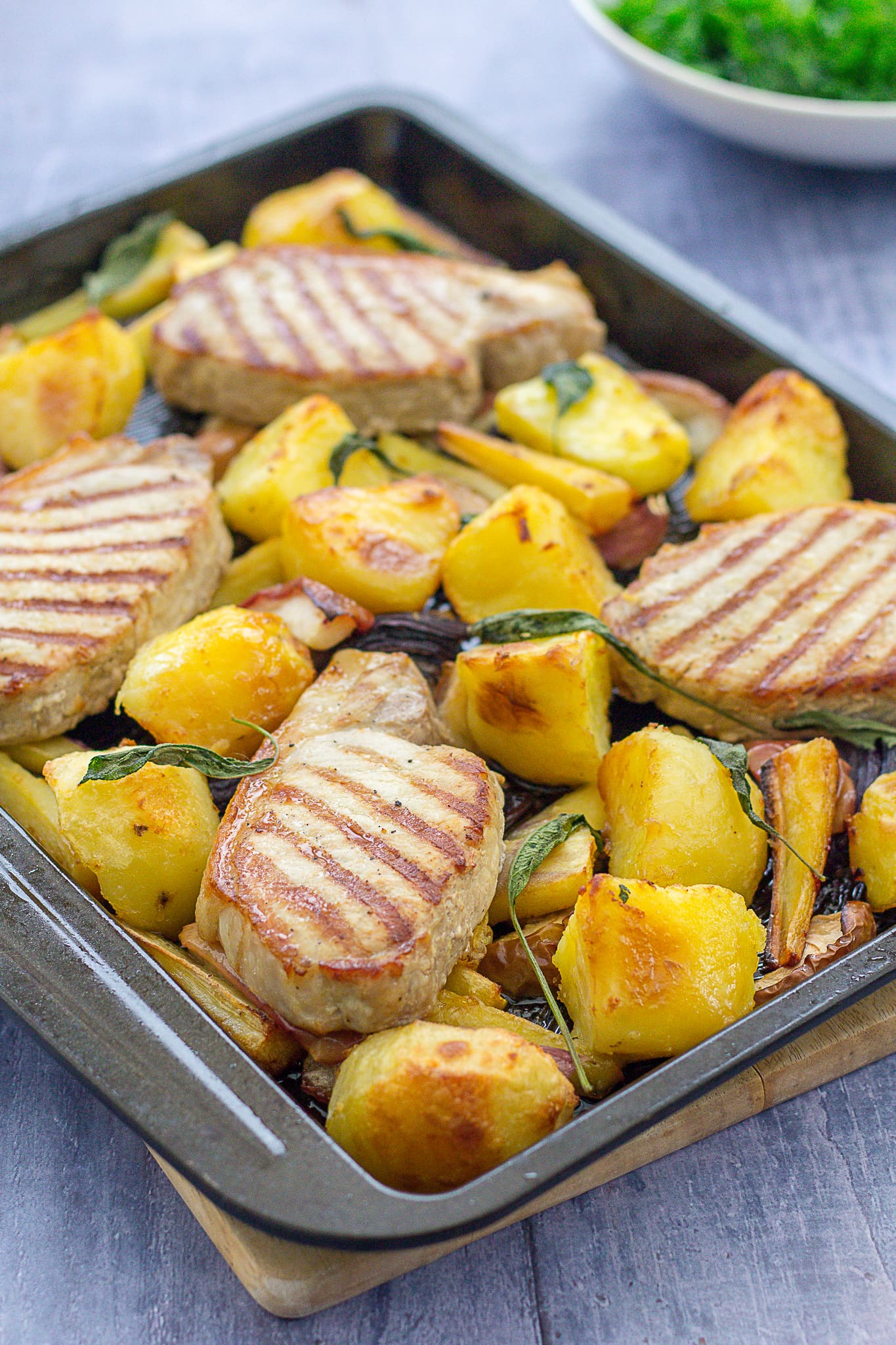 …together with parsnips, apples and sage!

My next question was, well what else should go in a pork traybake? For me pork works wonderfully with lots of different flavour, but the ones I went for in this traybake were parsnips, apples and sage – all great flavours that work really well together and compliment the pork chops beautifully. I then added some roast potatoes, onions and garlic for a really tasty traybake that only takes 1 hour from start to finish. 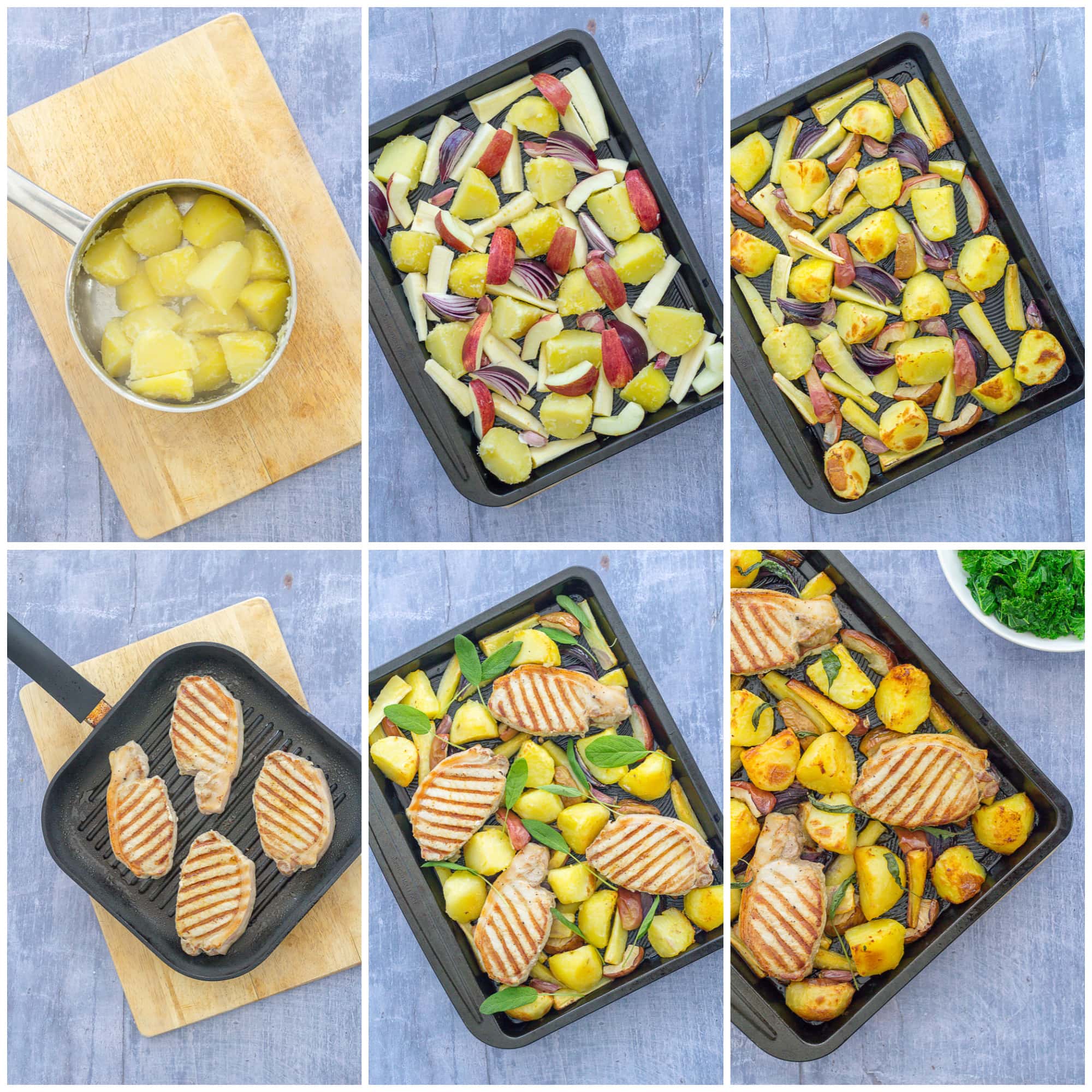 Let the oven do all the hard work!

I admit, this is not quite as straightforward as some of my traybakes, you do really need to parboil the potatoes to get the best roast potato texture/flavour and, as I have mentioned above, you do need to sear the pork, but apart from those fairly straightforward activities, it is a case of chucking everything in one pan and leaving the oven to do all the hard work. 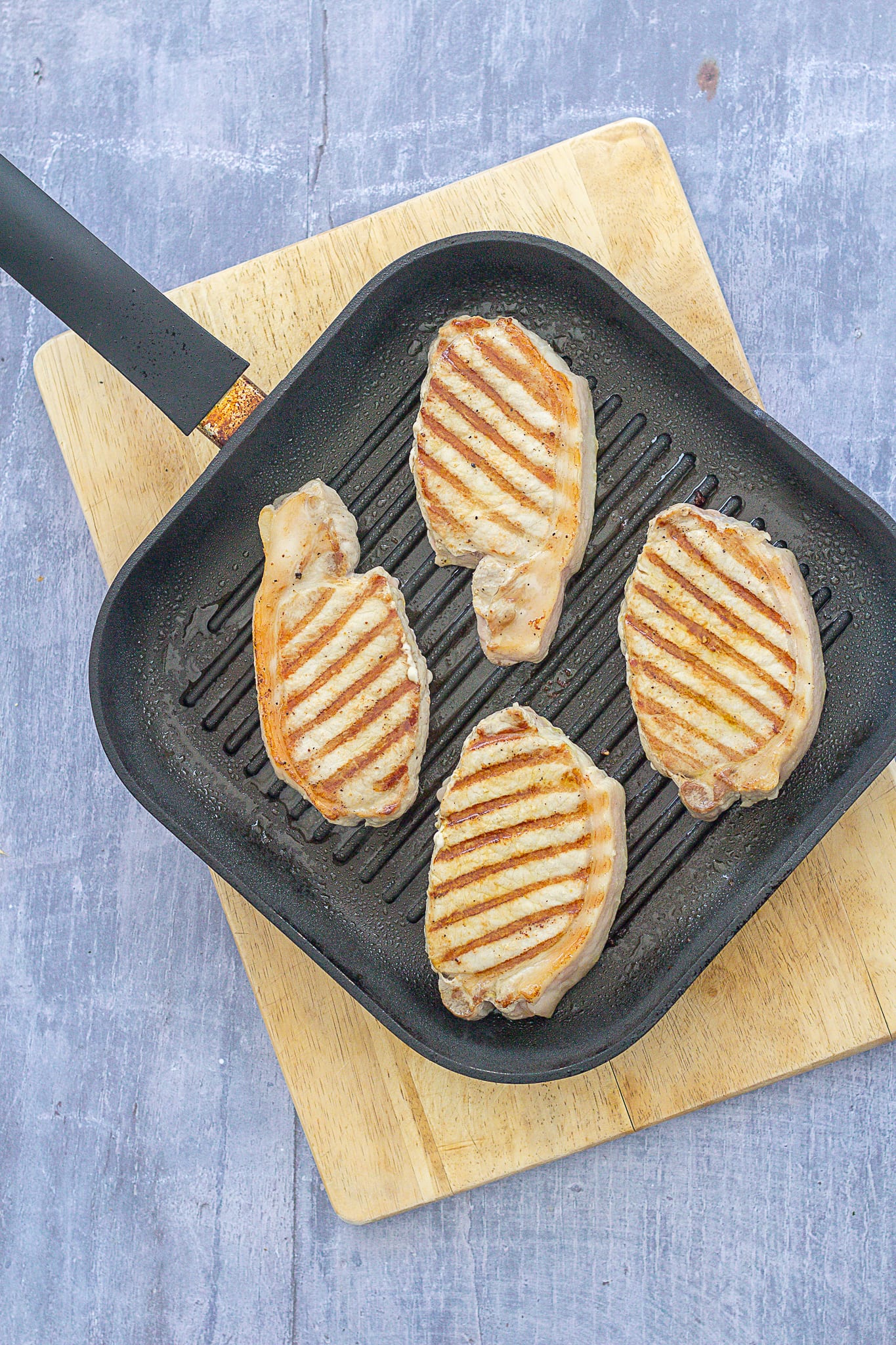 What to serve with pork traybake?

This dish is simple enough to make midweek, but enough of a treat to have at the weekend too. To keep things simple on a busy weeknight you can serve this traybake just as it is – with potatoes, pork and veggies, it really is a complete meal in its own right. But, if you have a little more time, you may want to add a green vegetable and some gravy.

What to drink with pork traybake?

The flavours in this pork traybake pair well with a Chilean Chardonnay or a South African Chenin Blanc. 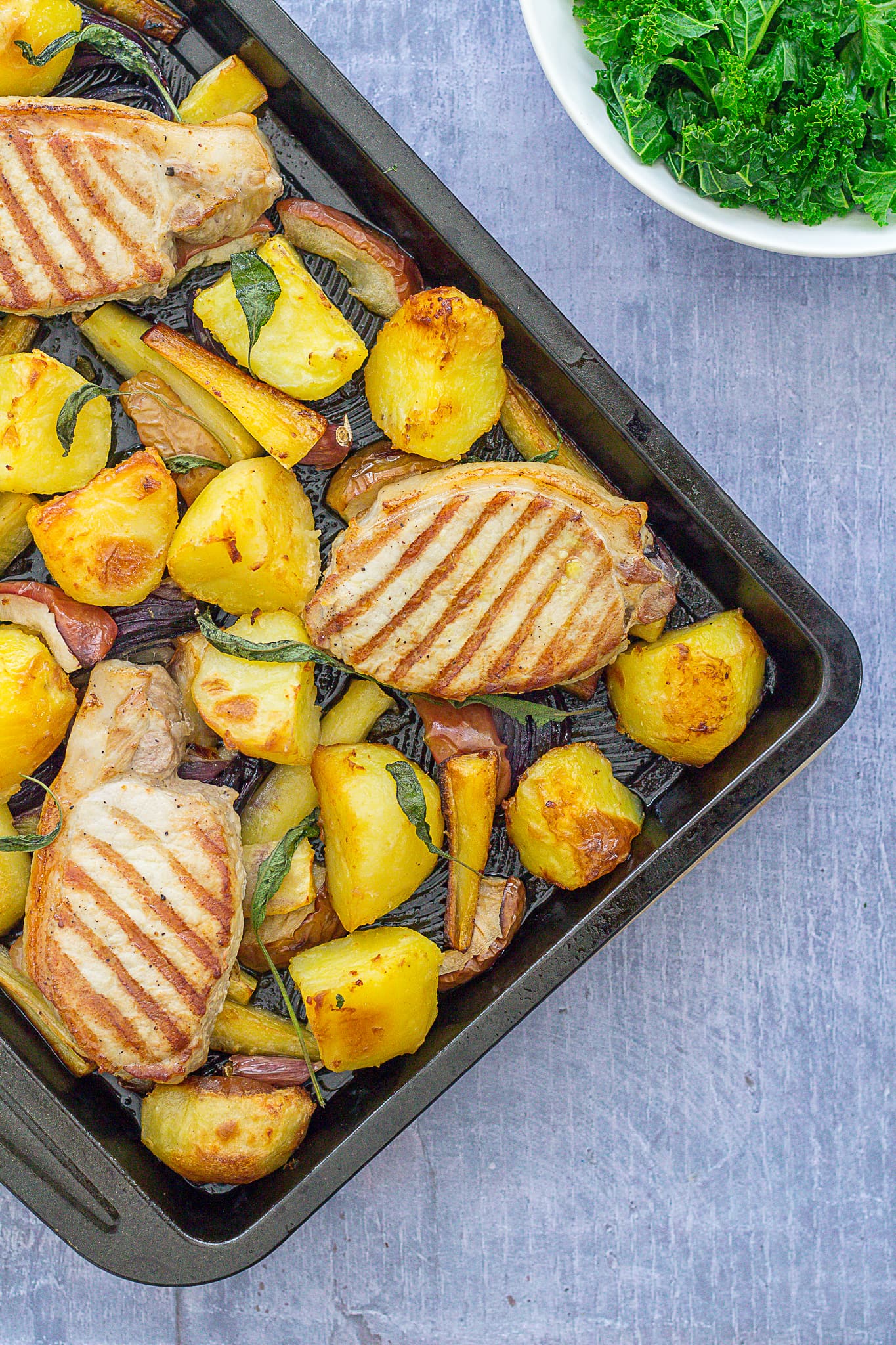 Can you reheat pork traybake?

I don’t recommend it. This really is a dish best served fresh – straight out of the oven.

Can you freeze pork traybake?

Technically, yes. But I don’t recommend it. This is not a recipe that fares well in the freezer. 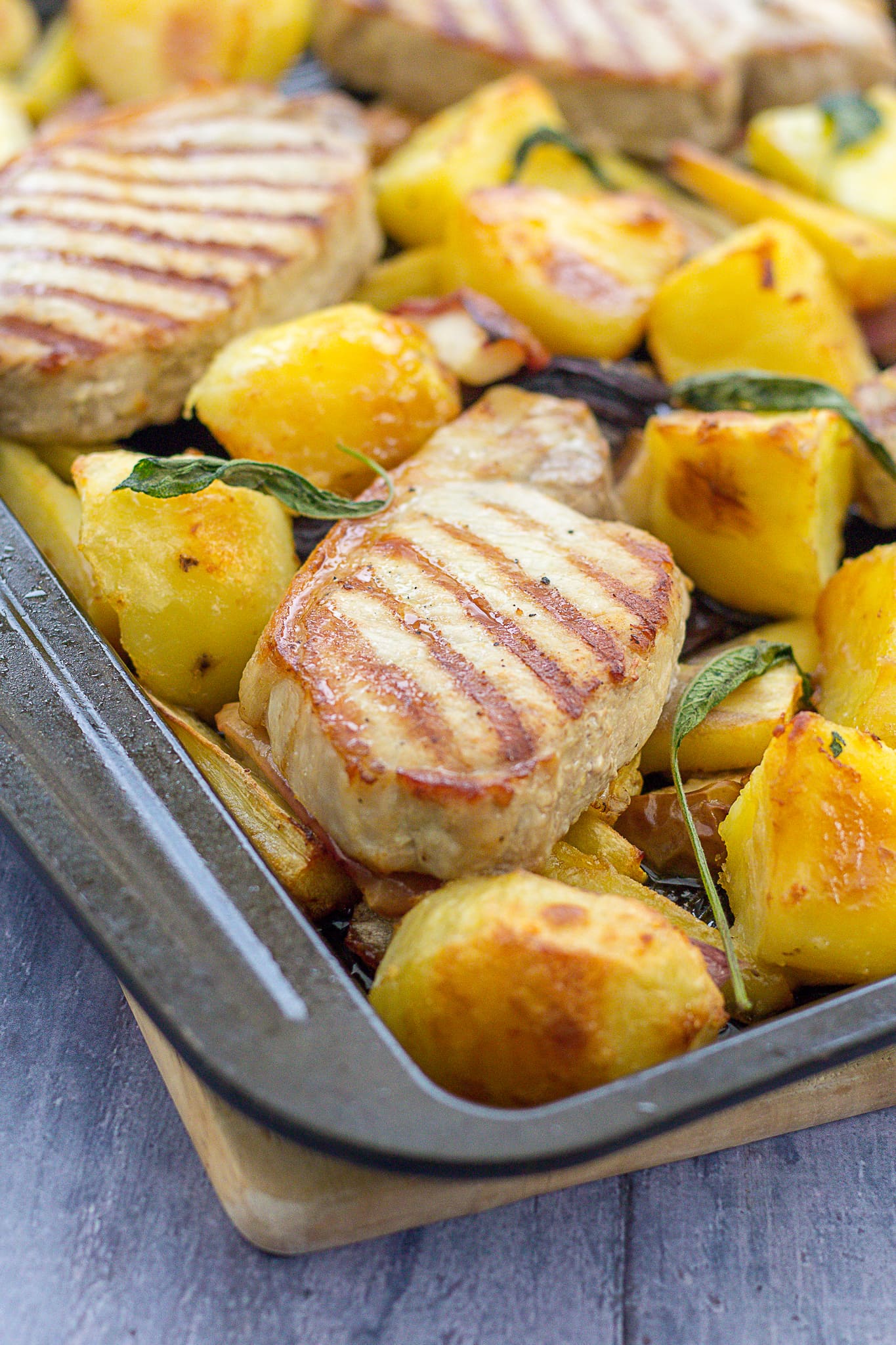 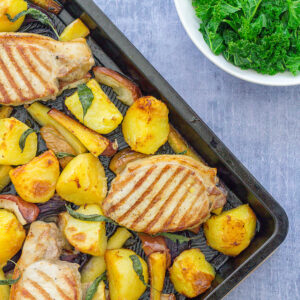 This is a great meal to make when you want all the flavours of a roast pork dinner... but none of the hassle. This simple Pork, Parsnip and Apple Traybake is essentially a pork roast dinner made in one tray! Delicious pork chops cook on top of roast potatoes, parsnips and apple with crispy sage and caramelised onions for a weeknight treat that is ready in under an hour.
Prevent your screen from going dark
Course Main Course
Cuisine British
Prep Time 15 minutes
Cook Time 45 minutes
Total Time 1 hour
Servings 4 people
Calories 631kcal
Author Eb Gargano 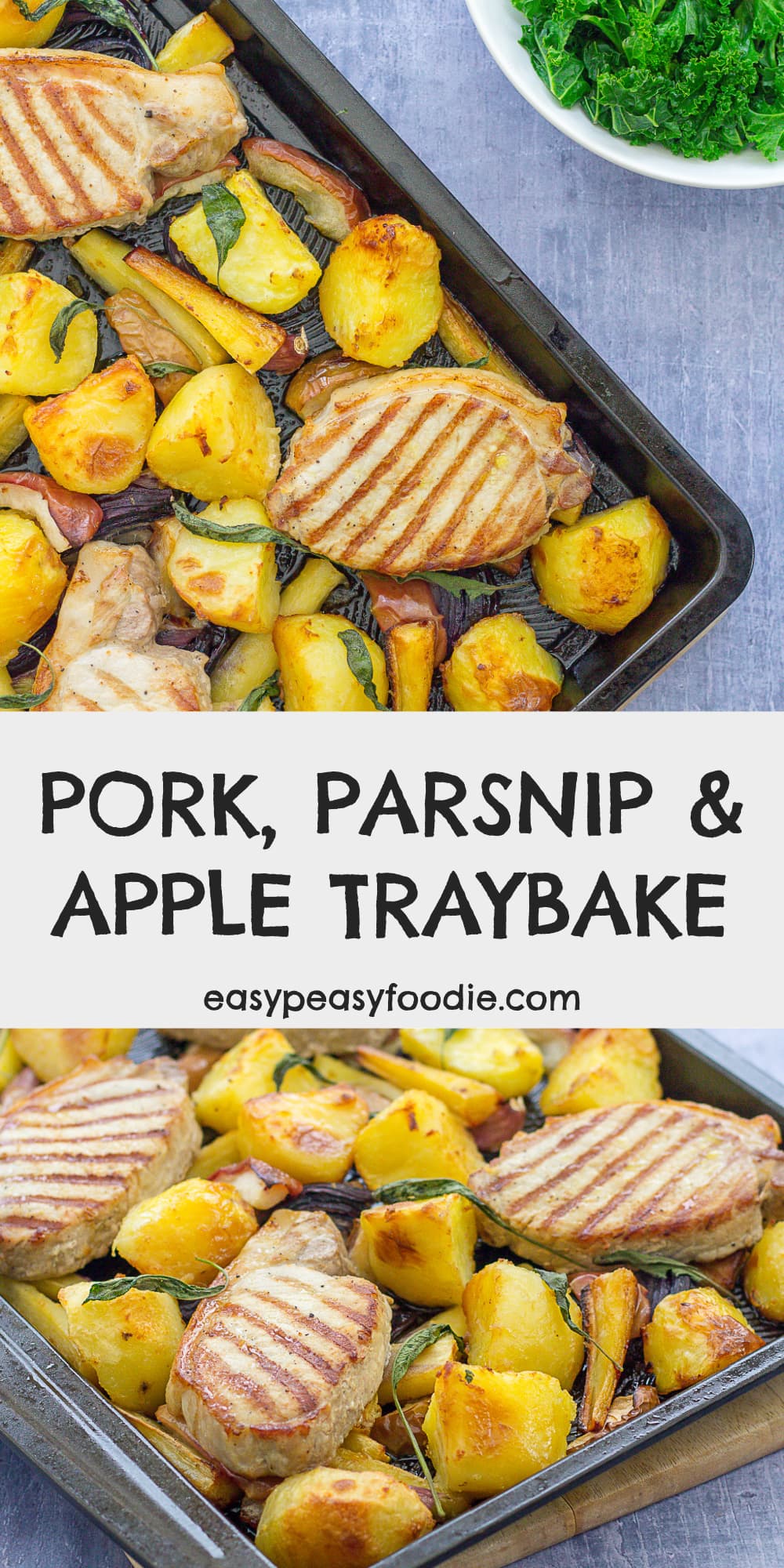