I am nothing, if not efficient – at least as far as planning my blogging goes. This week is Breakfast Week, in two weeks’ time it is Bramley Apple Week and slap bang in the middle of Bramley Apple Week is Pancake Day (AKA Shrove Tuesday). So what better way to celebrate all three events than Bramley Apple Breakfast Pancakes? Well, I thought it sounded like a good idea! My only concern was – would they taste nice? A minor concern, obviously, I am yet to taste a pancake that doesn’t taste good, but I added in some cinnamon, maple syrup and pecan nuts, just to make sure. And do you know what? They taste amazing…now all I have to do is work out how to tie these in to Chinese New Year and Valentine’s Day and I’m sorted for the month of February! 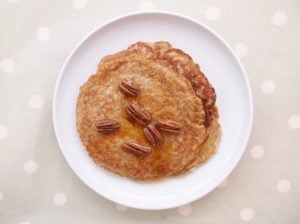 I adapted this recipe from an old American pancake recipe given to me in Holland by a friend from New Zealand, which she had got from an American friend in Albania. So rather an international pancake recipe in the end, especially when drizzled with some proper Canadian maple syrup and mixed with some nice British bramleys (and made by a nice British girl – I am British by the way, despite having a French first name and an Italian surname!) 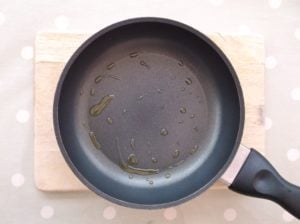 Apart from adding in some grated bramley apple, I have swapped the plain flour and baking powder for wholewheat self raising flour. This was partly because my husband and I are on a health kick at the moment and we are trying to reduce our consumption of white refined flour, partly because I had some in my cupboard and wanted to use it up, but mostly because I had a hunch that it would complement the apples and maple syrup beautifully and actually be BETTER than using white flour. (I was right by the way). However, if you are not a fan of brown flour, by all means use white self raising flour or plain white flour with 2 teaspoons of baking powder. I’ve also used maple syrup instead of sugar in the recipe as well as for drizzling. Depending on who you talk to, maple syrup is supposed to be slightly better for you than refined white sugar. What I do know is it is a good deal more tasty than refined white sugar! 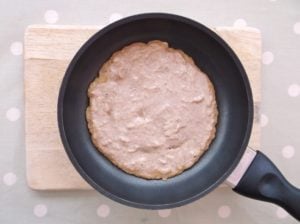 I chose to use American pancakes as they are easier to make (well they are for me anyway, I’ve had my fair share of French pancake disasters over the years, but never any drama with American pancakes) and they are a little bit thicker, which I think works better with the addition of apple. 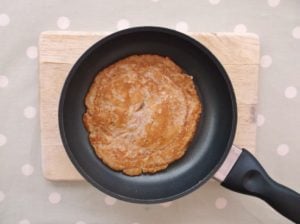 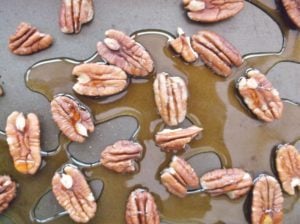 I’ve called these breakfast pancakes because they would make a fabulous breakfast for anyone who has the time. Sadly I do not. Even at the weekends I usually have about 30 minutes to make/eat/wash up and am consequently usually a strictly toast and cereal girl. If you are like me and don’t have the time to make these for breakfast they still make a fabulous pudding and I’m sure they would go down brilliantly on pancake day. Even with little people. My kids lapped these up when I tried them out on them (though this was partly due to the maple roasted pecans which they always go mad for!) 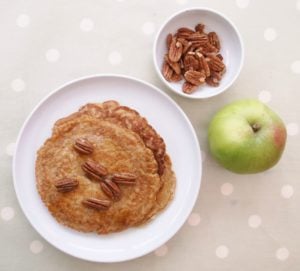 If you want to make these ahead of time, simply reheat in an oven set at 100C for about 20 minutes. Put the pancakes in when you switch the oven on, DO NOT wait for the oven to heat up first. 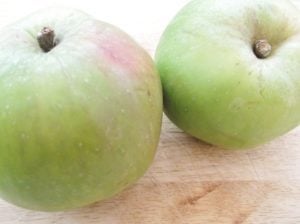 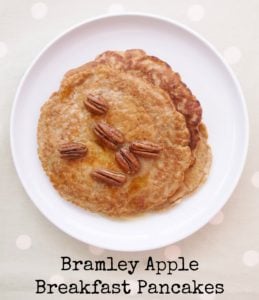 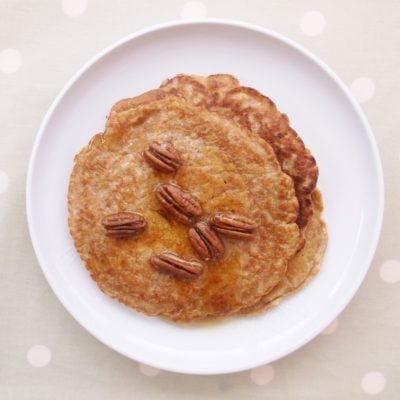 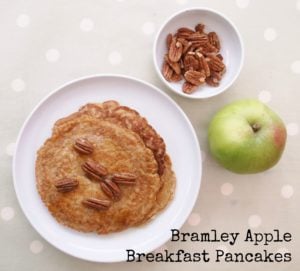