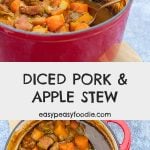 Wondering what to do with a pack of diced pork? This easy peasy Diced Pork and Apple Stew is your answer! Tender pork is enhanced beautifully by tangy bramley apples and root vegetables cooked in a delicious pork gravy. Plus, it’s quick to prep, a real crowdpleaser and it will make your kitchen smell wonderful! 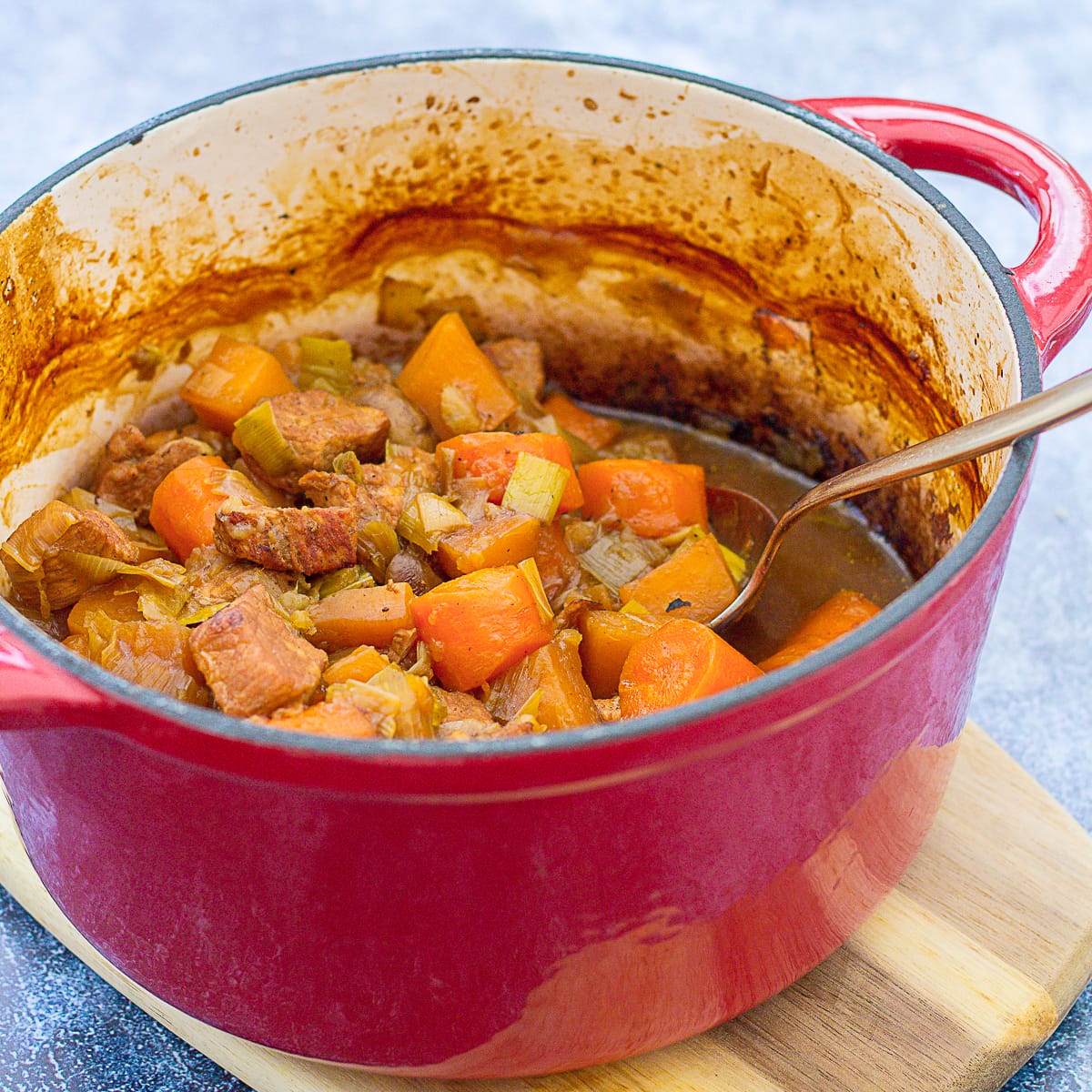 Why I love stew…

I am a huge fan of ‘stew’ – it’s definitely one of my favourite meals. A stew is so easy to make and also the type of meal that is so much better than the sum of its parts, thanks to the fact that everything cooks in the gravy. This results in tender meat, wonderfully flavoursome vegetables and a gravy that is so much better than when it went into the pot – thanks to all the flavour the meat and veg have imparted into it. 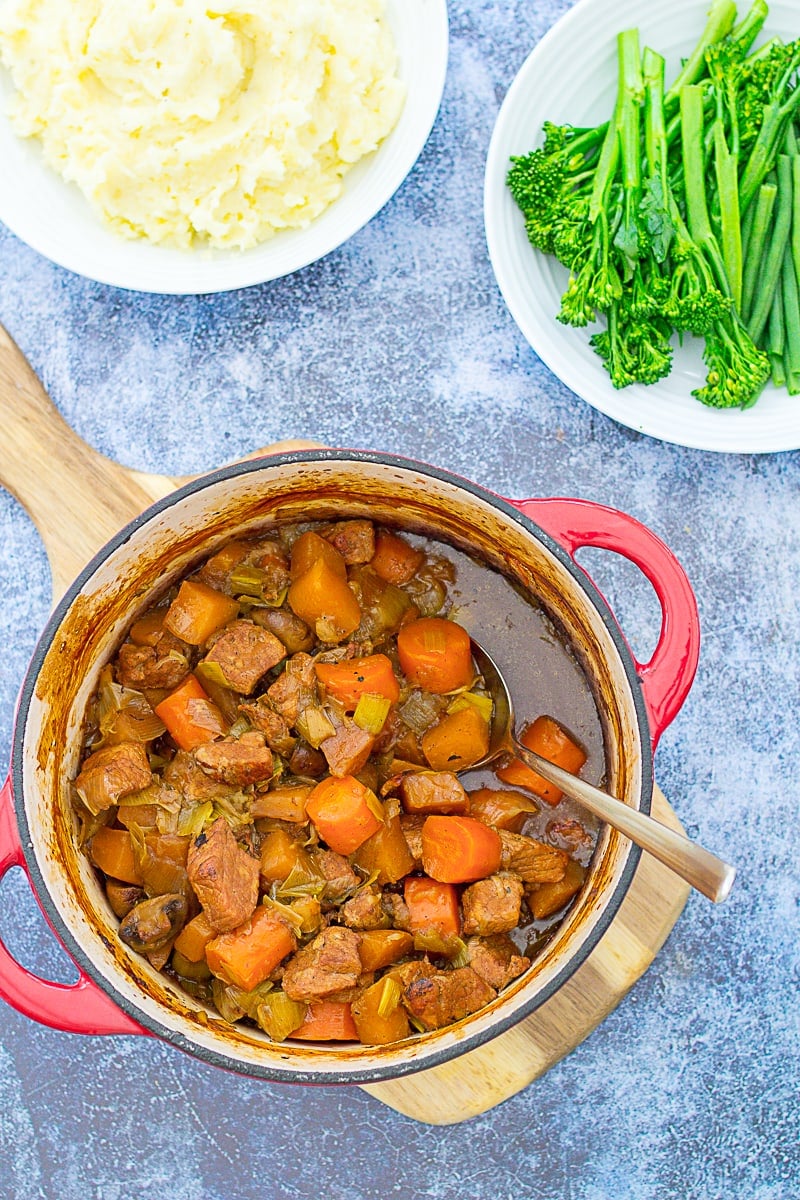 If stew is one of my favourite meals, then this easy Diced Pork and Apple Stew is definitely one of my favourite stews. The addition of a bramley apple really takes this pork stew to the next level. It’s kind of like a roast pork dinner, but in a super simple ‘prep it and forget it’ one pot format, that lets the oven do all the work. Perfect for busy evenings and hectic weekends.

And it’s so easy peasy to make. Simply fry the meat and veg, add the stock and apple, and then put it in the oven and leave it alone until it’s ready. 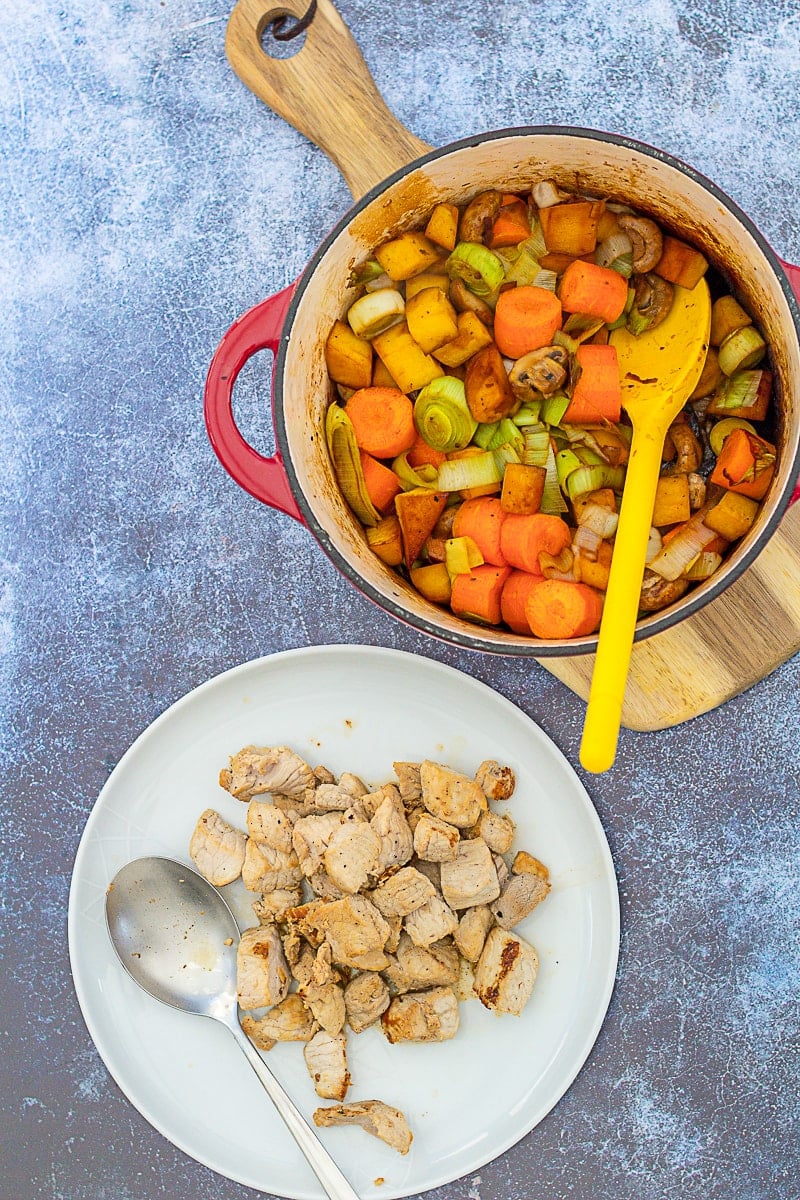 What to serve with pork and apple stew?

There are a couple of ways you could go here.

If you want to make this quick and easy… and only have 1 pot to wash up at the end, then serve this with bread or baked potatoes. (I like to pop a few jacket potatoes in the oven when I turn the oven on – just before I make the stew. By the time the stew is cooked, the potatoes will be cooked too!)

Alternatively, if you have a little more time on your hands, you can serve this stew with mashed potatoes and vegetables. Serving the stew like this makes a great low effort alternative to a roast dinner!

You could also serve the stew with dumplings on top (just follow the steps in this recipe). 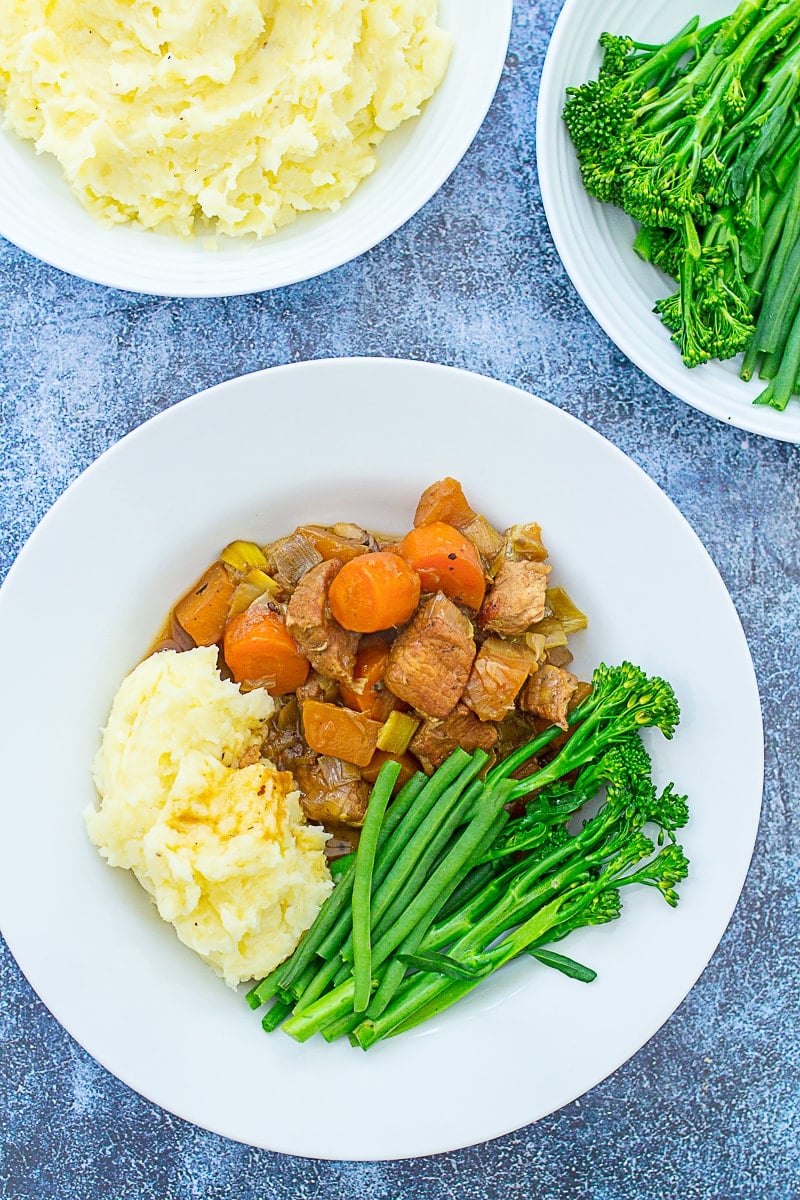 What to drink with pork and apple stew?

My preference is to serve this pork and apple stew with white wine – I personally find red wine often overpowers pork and I also feel red wine clashes with the tart flavour of the bramley apple.

The best options would be a French Chardonnay (for example White Burgundy), white wines from Bordeaux (and any other Sauvignon-Semillion blend) or a South African Chenin Blanc. A dry Alsace or German Riesling would also work well.

If you prefer red, go for something like a Cotes du Rhone or a Chianti.

Another great pairing would be cider – which obviously goes brilliantly with both pork and apples.

Make it your own

This recipe is so adaptable.

You could swap the diced pork for diced chicken, turkey, lamb or beef. (Though leave out the apple if you are doing this with lamb or beef, and cook the stew for an extra 30 minutes.)

You could make this veggie by leaving the meat out altogether and instead adding in some Quorn ‘chicken’ pieces, thickly sliced Quorn sausages or simply some extra veg (a parsnip, for example, works really well here.)

And of course, you could swap the suggested veggies for any veggies you like (or have lurking at the back of the fridge) – for example: parsnips, celeriac, turnips, potatoes, onions… 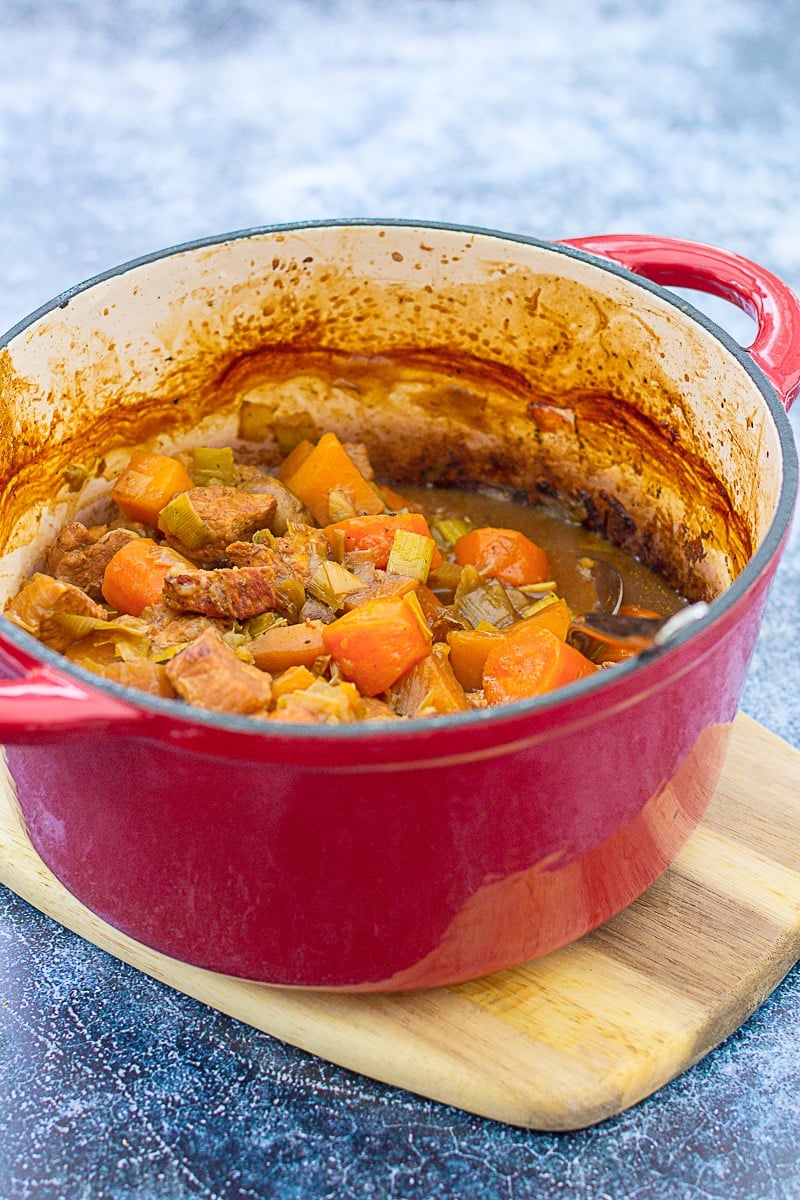 Can pork and apple stew be reheated?

Yes, absolutely. Simply put any leftover stew into a plastic, lidded container and place it in the fridge, where it will keep for up to 3 days.

To reheat, place the stew in a saucepan and add a splash of water. Bring to the boil, then reduce the heat and simmer for 5-10 minutes or until piping hot all the way through.

Alternatively reheat this Pork and Apple Stew in the microwave until piping hot all the way through.

Can pork and apple stew be frozen?

Definitely! Simply put the cooked and cooled stew into a plastic, lidded container and place it in the freezer, where it will keep for up to 1 month. Defrost for overnight in the fridge and reheat as above. 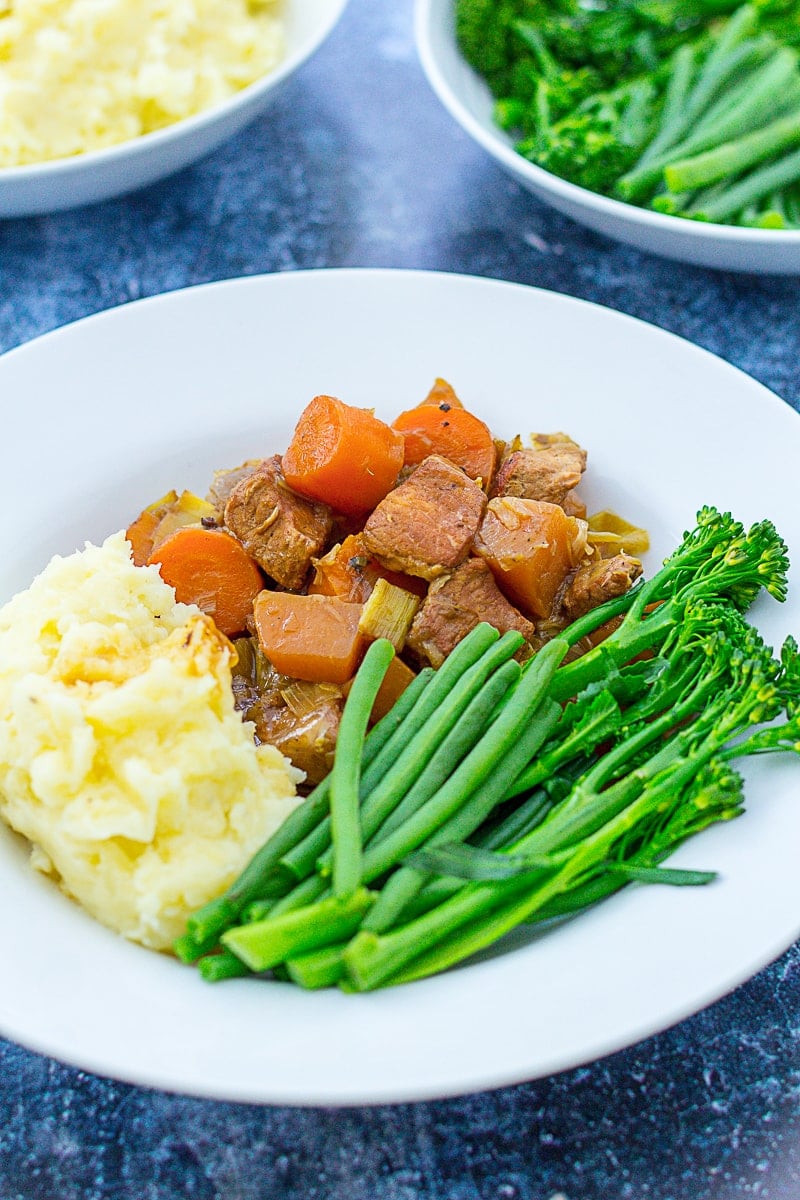 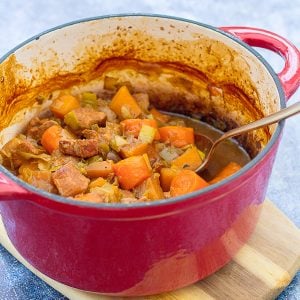 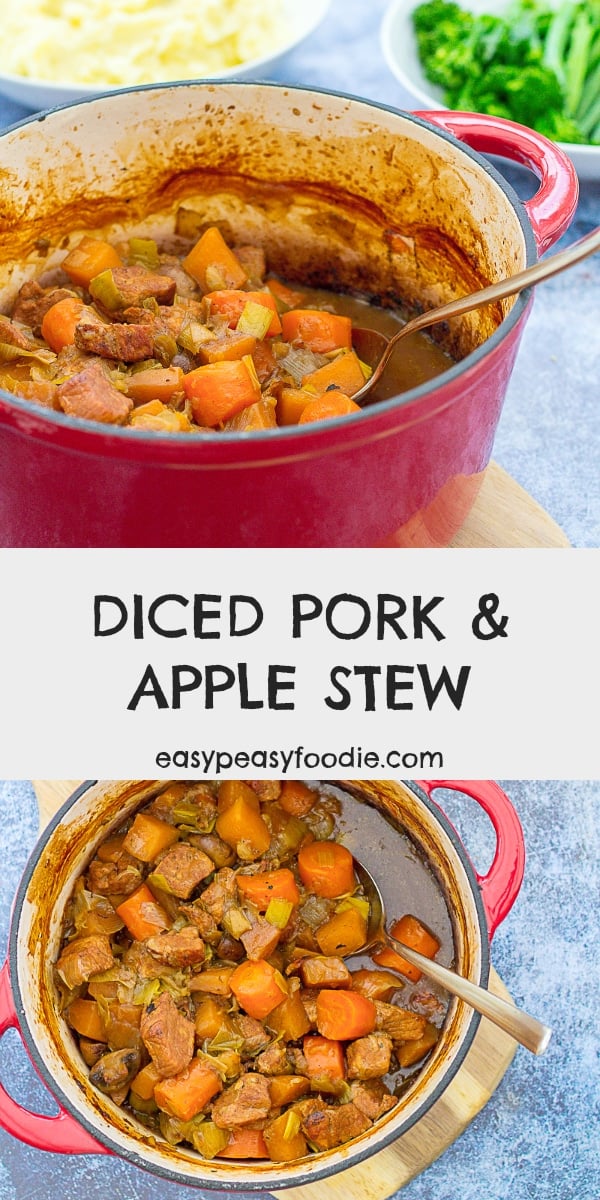