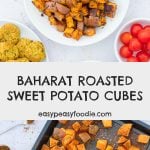 Delicious cubes of sweet potato, coated in baharat spice mix and salt, then roasted in the oven for 20 minutes, these Baharat Roasted Sweet Potato Cubes make an easy peasy side dish for Middle Eastern food and BBQs, or indeed any meal where you want a healthier alternative to chips! 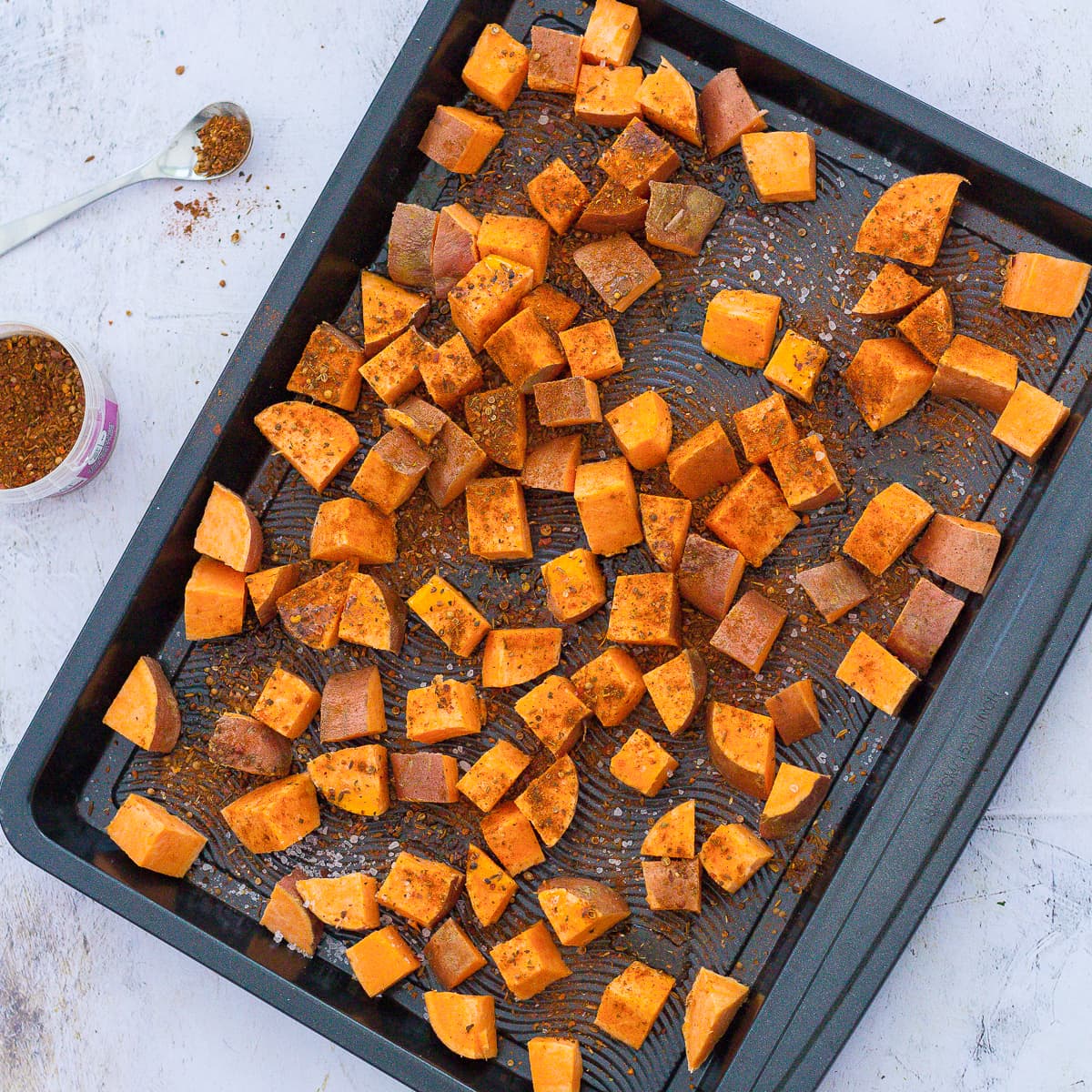 How this recipe came about…

But I’d never considered coating roasted sweet potatoes in baharat spice mix until I had lunch with my good blogging friend Mandy Mazliah. Mandy is the blogger behind Sneaky Veg and Cook Veggielicious… and she’s also the co-host of Productive Blogging LIVE – a conference we run together for bloggers who want to grow their blogs and be more productive.

Last year, when we were working together to plan the next Productive Blogging LIVE, Mandy made me Baharat Roasted Sweet Potato Cubes for lunch, along with pittas, hummus and rocket salad and I was blown away… The spicy, smoky flavours of baharat just work so well with the sweetness of sweet potatoes to make a side dish so good, quite frankly it deserves to the star of the show!

I’ve made this recipe about a bazillion times since that delicious lunch and I really wanted to share it with you guys as it is just so AWESOME! So I asked Mandy if she’d mind letting me share my version of her lovely recipe here on Easy Peasy Foodie… and being the lovely lady that she is, she said yes 😀 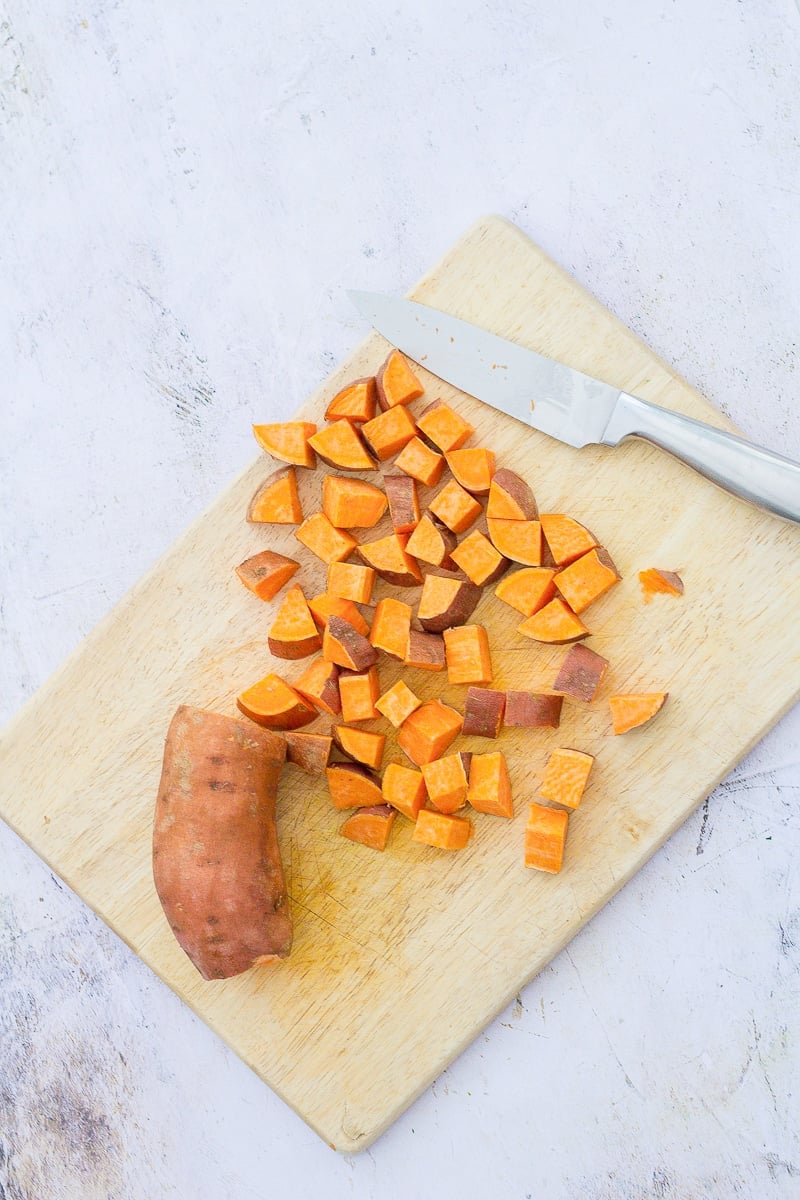 Baharat means ‘spices’ in Arabic and is a spice mix found throughout the Middle East. The exact blend of spices varies from region to region, but it typically includes coriander seed, cumin seed, smoked paprika, cinnamon, nutmeg, cardamom, cloves and black pepper.

Baharat spice mix is now widely available in supermarkets. But if you want to make your own, you could try this Baharat Spice Mix recipe from Olive Magazine. 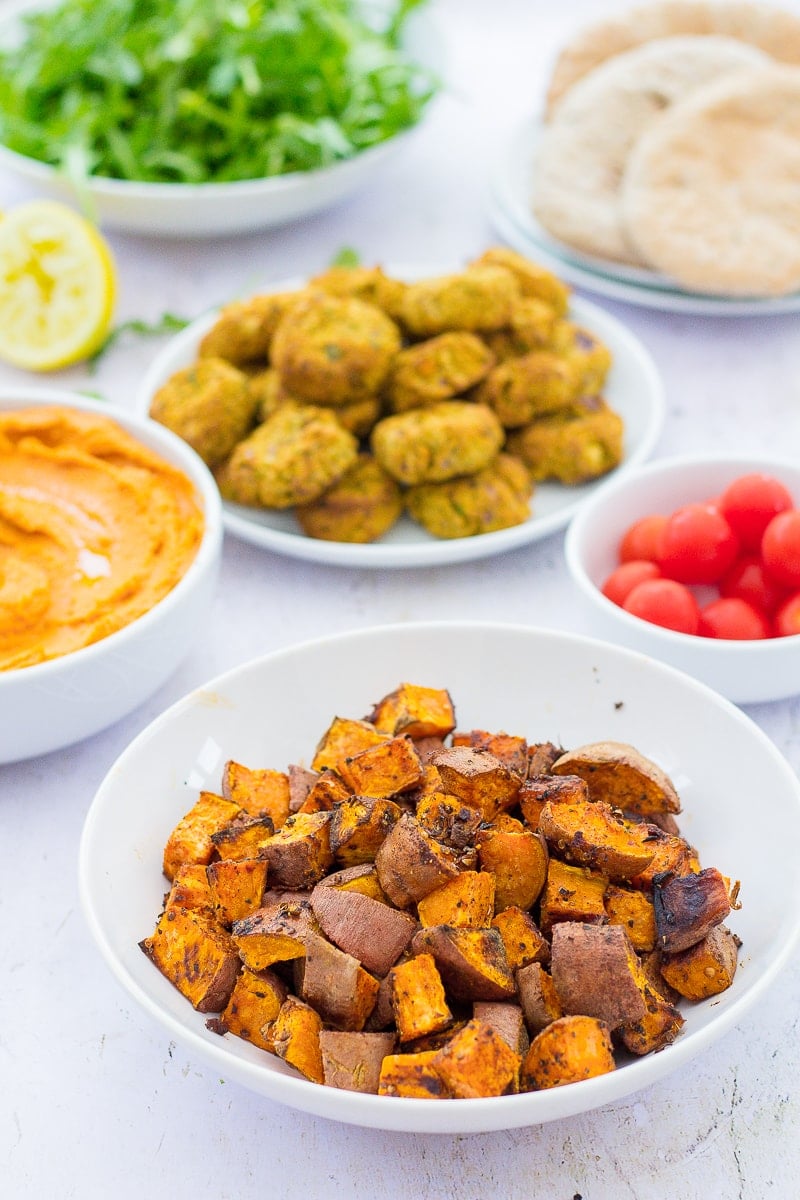 This recipe really is ridiculously easy! Simply cut a large sweet potato into 1cm (½inch) cubes, and tip the cubes onto a baking tray. Drizzle with olive oil, then sprinkle generously with baharat and sprinkle over some salt. Mix it all together (ideally with your fingers!) Then roast in a hot oven for just 20 minutes and tada! Perfect little cubes of deliciousness 😀

What to eat with Baharat Roasted Sweet Potato Cubes

These yummy little sweet potato cubes go with practically everything! They make a great healthy alternative to chips, served with burgers or fish and they make a fab barbecue side too!

But my hands-down favourite way to serve them is as part of a mezze spread, with other Middle Eastern dishes, such as hummus, falafel, tabbouleh and pittas. 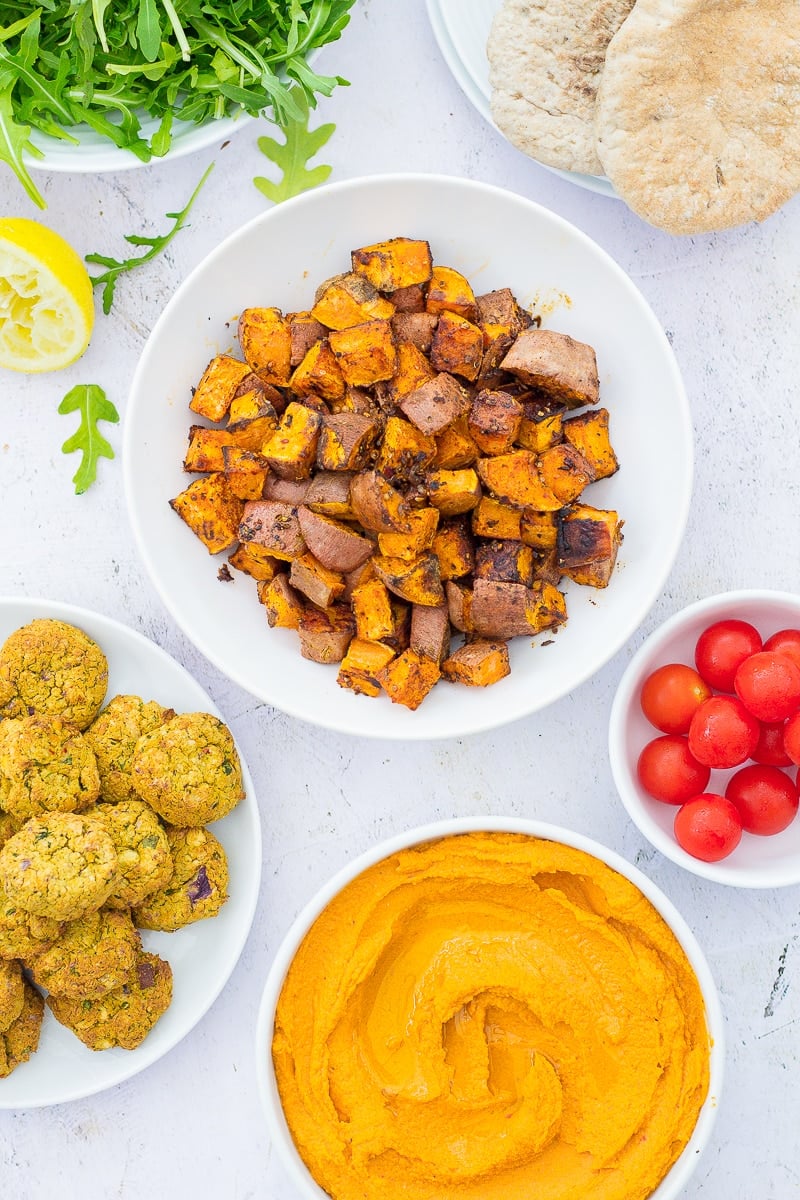 What to drink with Baharat Roasted Sweet Potato Cubes

If you prefer red, then I recommend a young and fruity Grenache-based red or rosé from Southern France or Spain (where Grenache is called Garnacha!) would also go very well.

Yes, they can! Simply put any leftovers in a plastic lidded container and place in the fridge, where they will keep for up to 4 days. 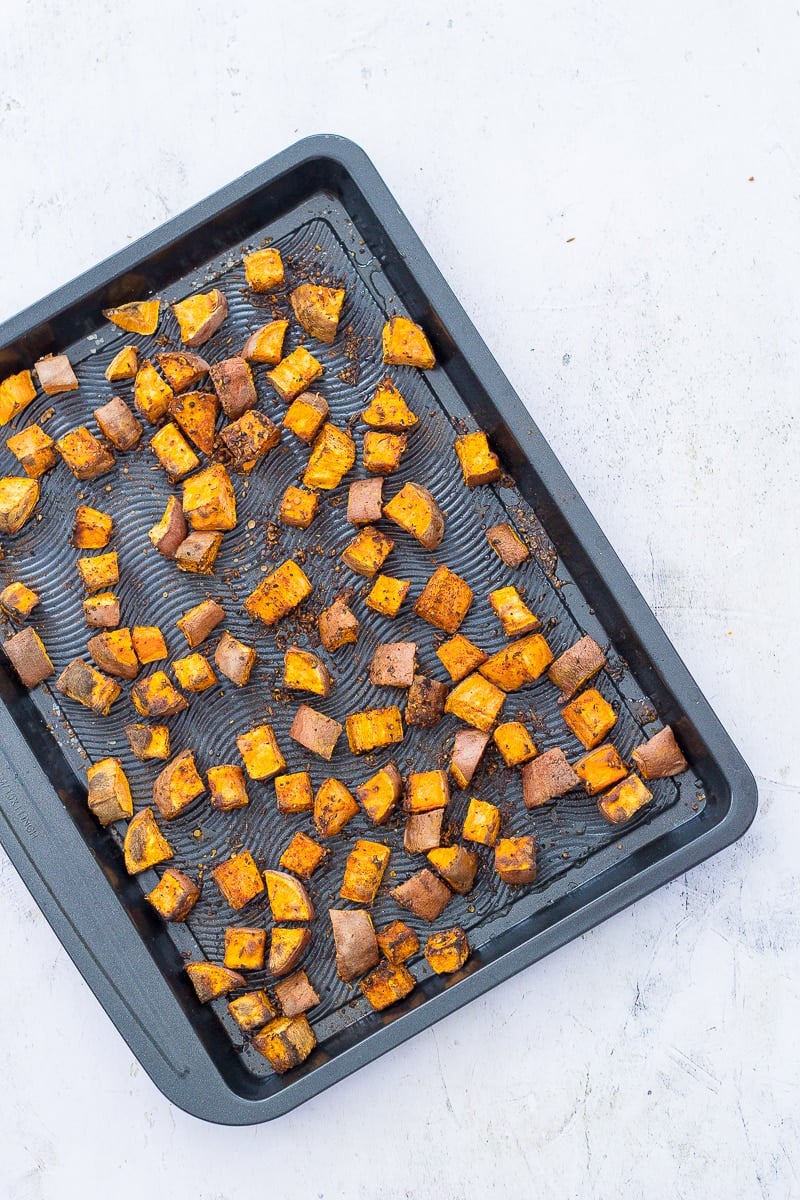 Yes, you can – though they do have a tendency to go a bit soft when you freeze them, they will still taste nice. Simply put the roasted sweet potato cubes in a plastic lidded container and place in the freezer, where they will keep for up to 3 months.

Defrost overnight in the fridge, then reheat as above. 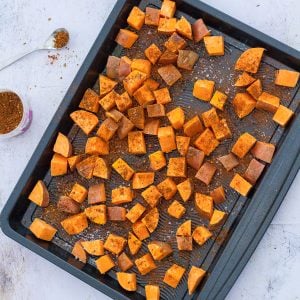 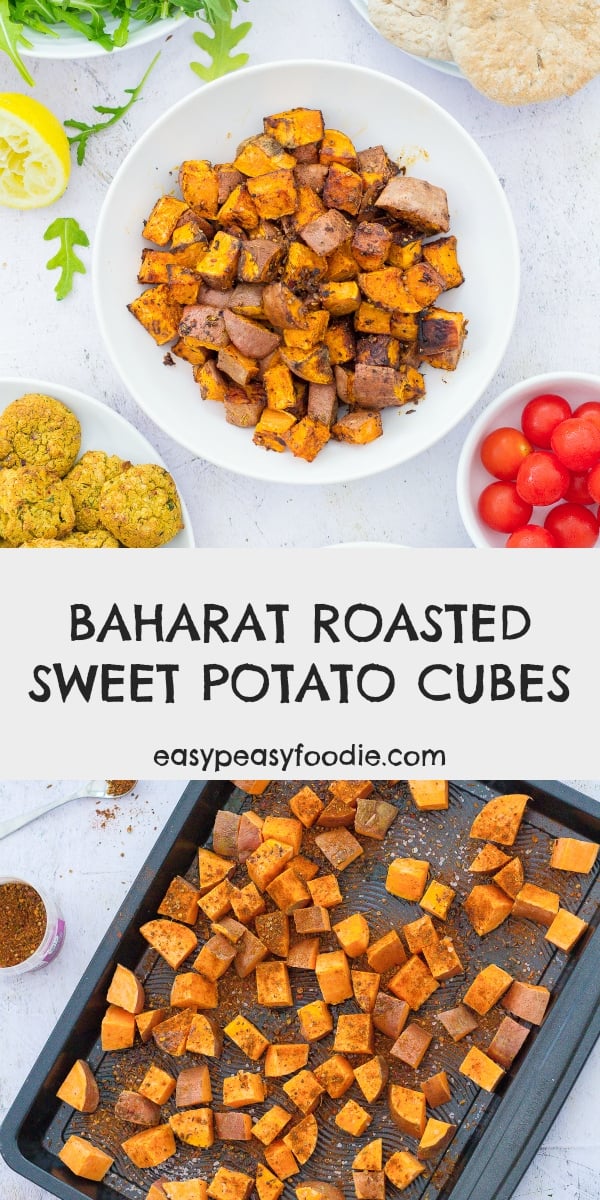