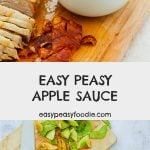 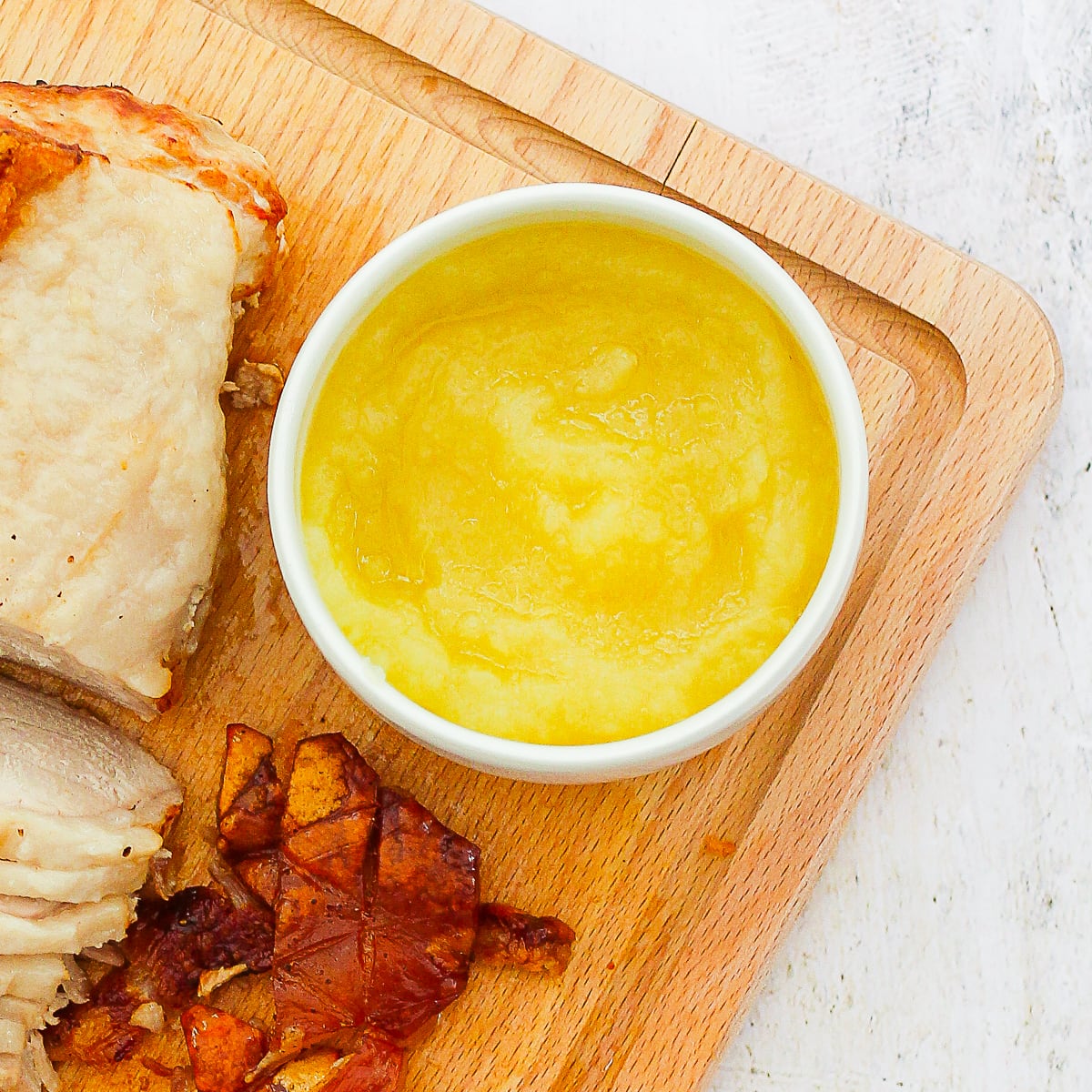 Apple sauce with roast pork is a British institution! The tartness of the apple sauce – traditionally made with Bramley or ‘cooking’ apples, is the perfect contrast to the richness of roast pork.

This simple, but delicious, recipe has been passed down through the female side of my family. My maternal grandmother’s family had a market garden in Spencers Wood, near Reading and they had orchards there too. I am sure apple sauce must taste particularly good if the apples are from your own orchards!

My grandmother passed this recipe onto my mother and she passed it on to me. It’s such a simple recipe that it was often my job to make it for our Sunday lunch as a kid. (Sunday lunches were usually a team effort in our house growing up – with us all doing our bit. My ‘bits’ were usually the sauces and the vegetables). 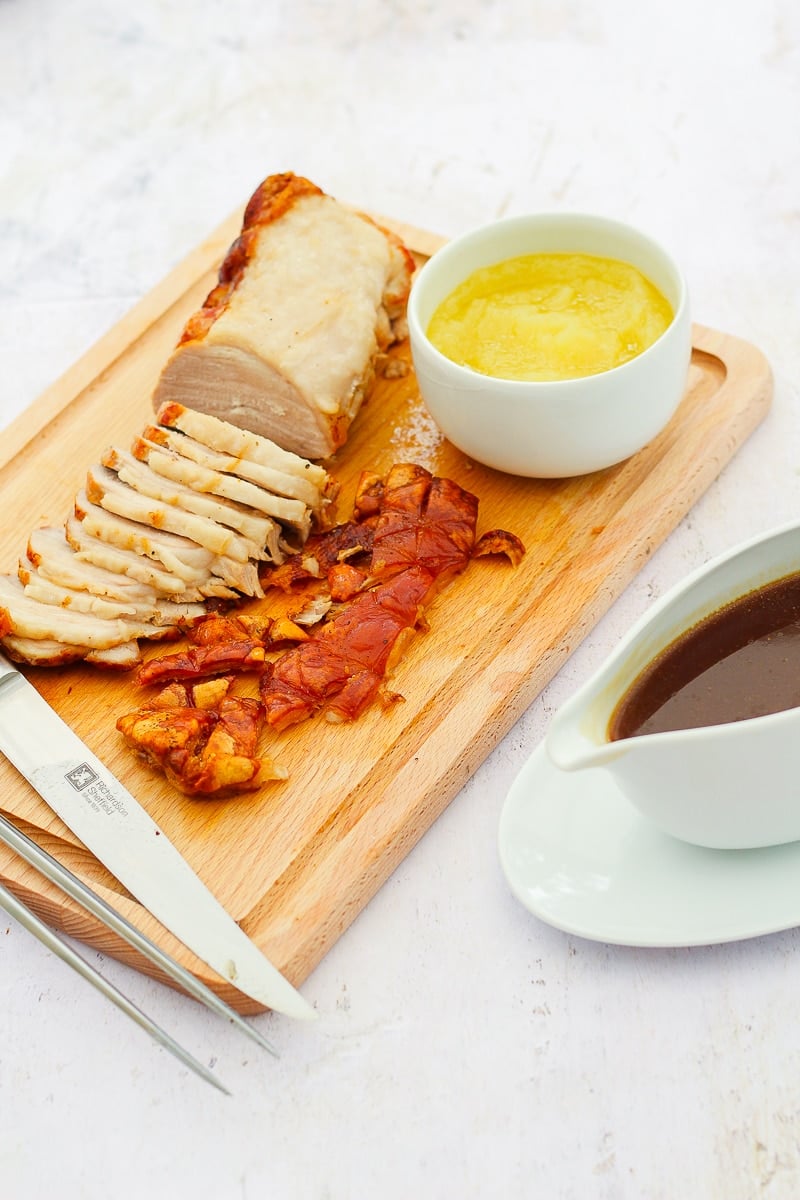 This recipe is so easy, it’s barely a recipe. Once you realise just how easy it is, you’ll never ever bother to buy apple sauce again! Better still it’s much tastier and healthier than shop-bought apple sauce 😀

All you need to do is peel and chop an apple, place it in a pan with a little water and cook until the apple falls apart and becomes a sauce – it’s that simple! 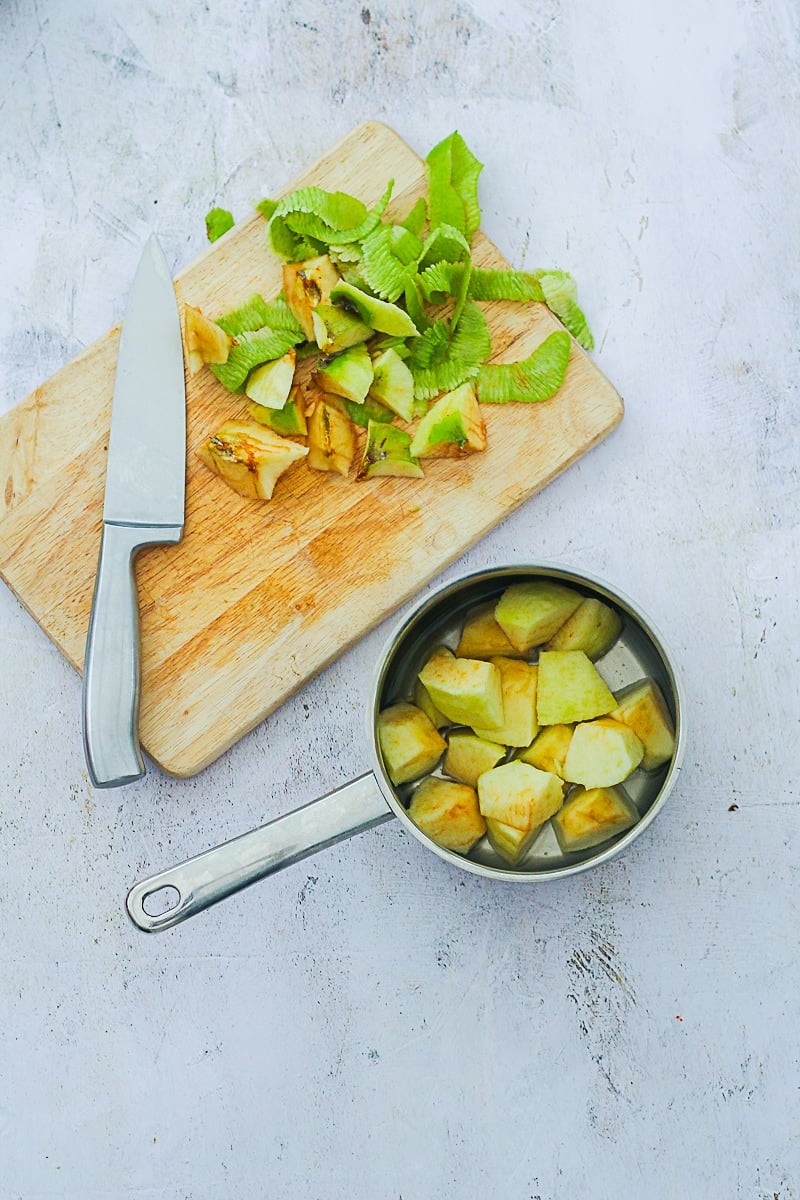 What’s the best type of apple for apple sauce?

However, in all honesty, this method will work with any kind of apple. So, if your preference is for something sweeter, you could use a dessert apple, such as Gala, instead. 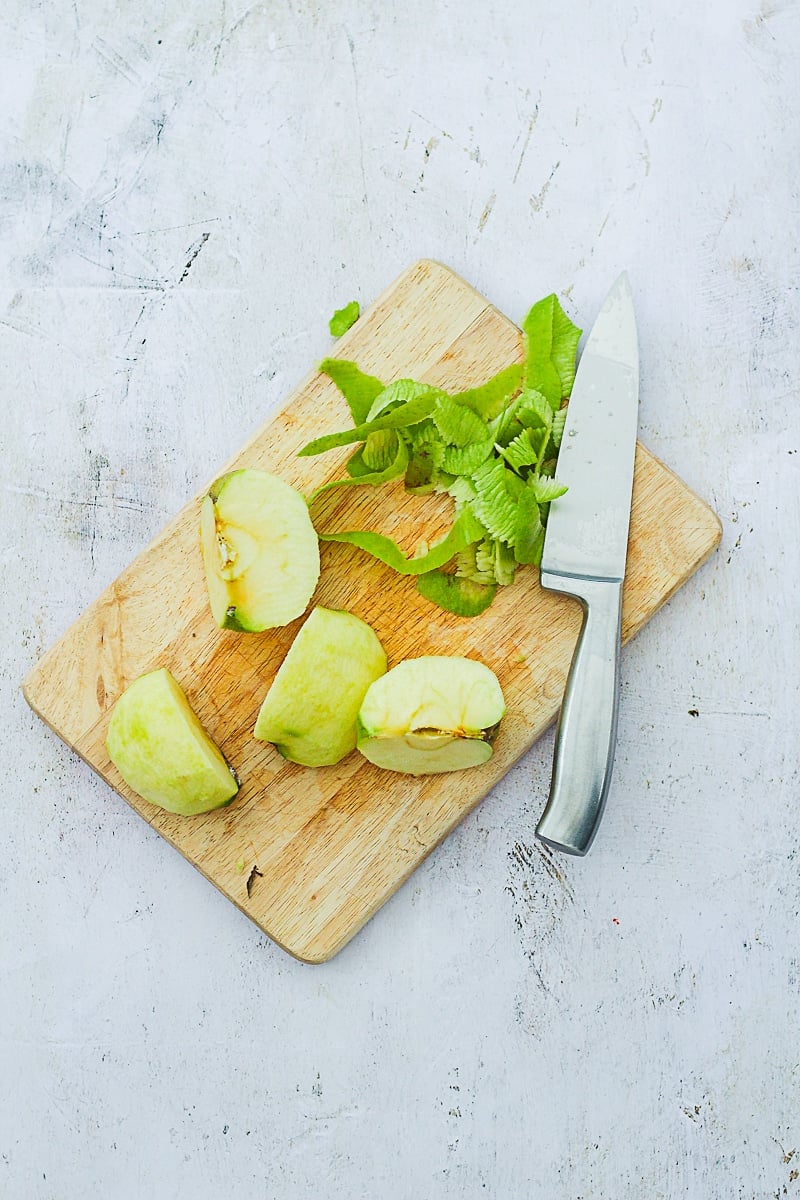 Should you add sugar to apple sauce?

Personally, I am not a fan of adding sugar to apple sauce. I don’t especially like adding sugar to anything if I can help it and I like to let the natural flavour and tartness of the Bramley apples shine.

But if you have a sweet tooth and find the flavour of a Bramley apple too ‘tart’ for your tastes, you can go one of two ways – either use a sweeter ‘dessert’ apple (see above), or stick with the traditional Bramley apple but add a little sugar to taste.

If you are going to add sugar to apple sauce, do it at the start of cooking so that it has plenty of time to dissolve during cooking. 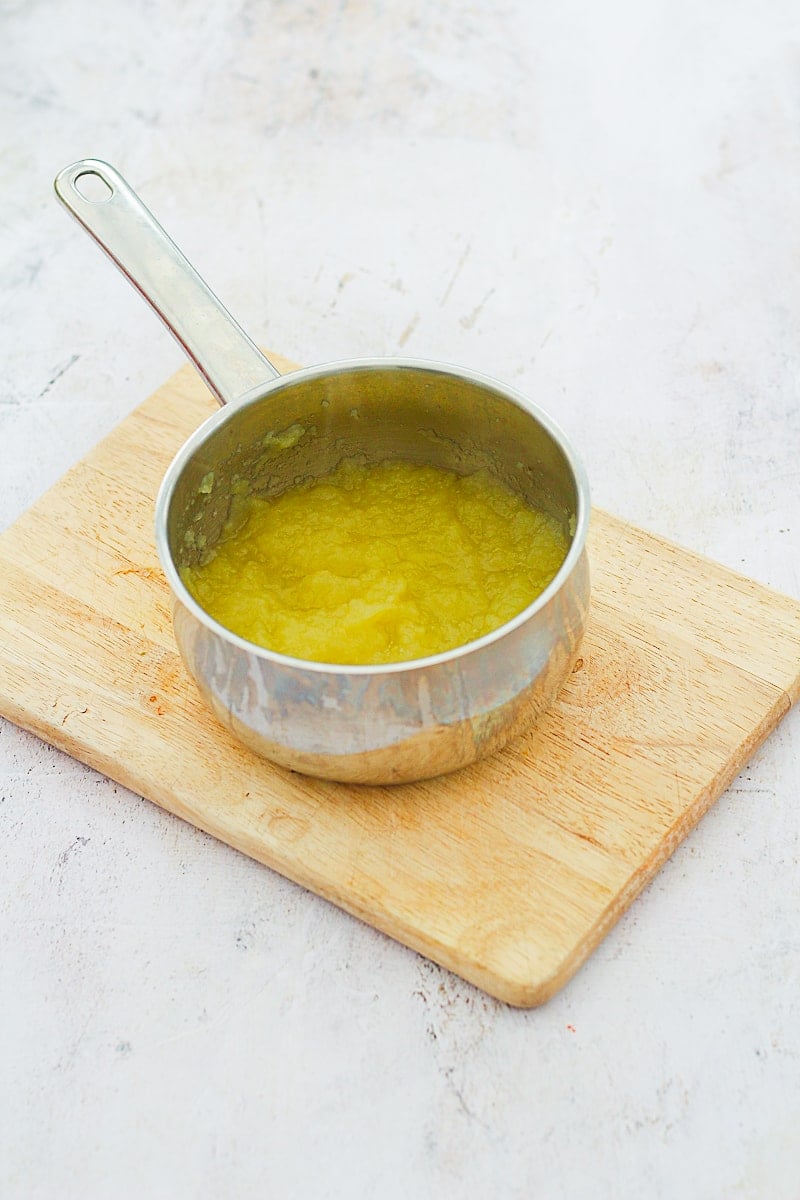 What does apple sauce go with?

Like most British families, we make apple sauce primarily to go with roast pork, but it also goes very well with game birds such as duck and goose.

You can also obviously serve apple sauce with pork prepared in different ways – for example simple pan-fried pork chops or pork kebabs. And it is also delicious with sausages.

But apple sauce is not just for savoury dishes! I love apple sauce stirred into yogurt – which makes a lovely healthy breakfast or dessert. You can also swirl it into porridge (especially nice with a sprinkle of cinnamon) or serve it on top of pancakes. 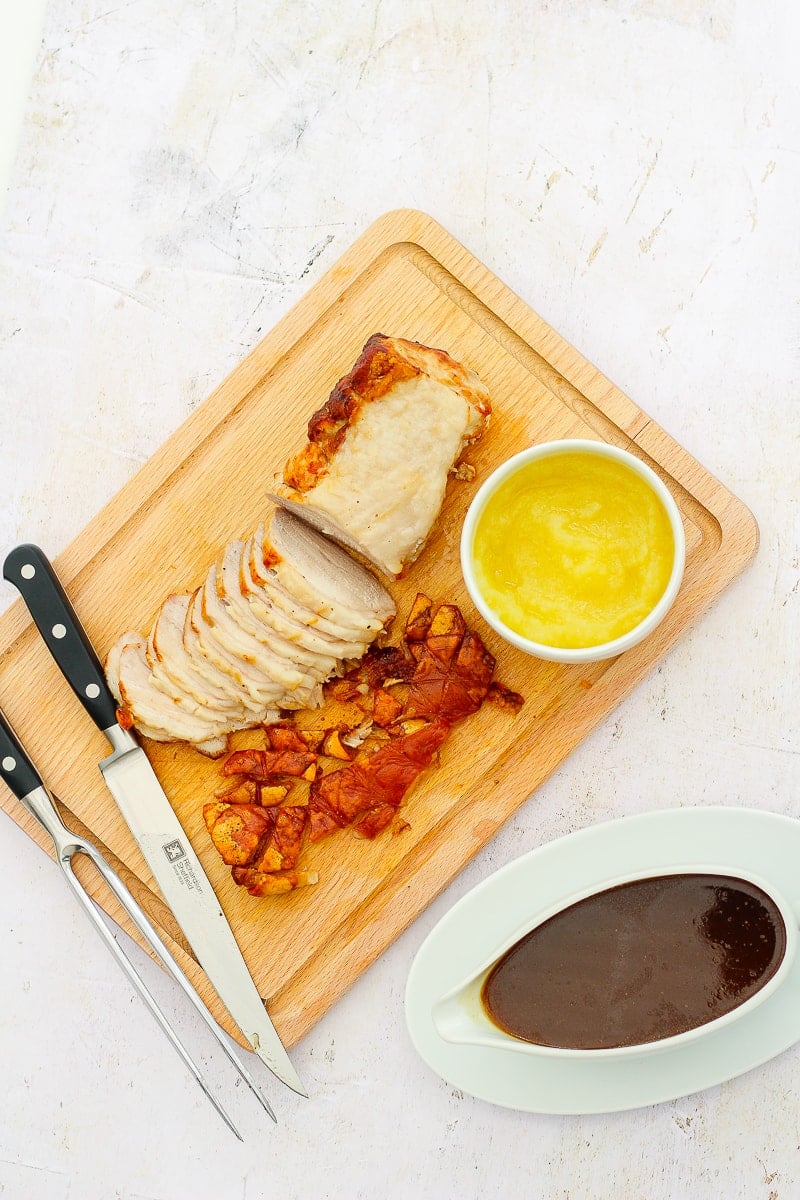 How long does apple sauce keep in the fridge for?

Apple sauce will happily keep in the fridge for a week, so long as it’s in an airtight container – such as a plastic pot with a lid or an old jam jar with the lid screwed on.

You can either eat it cold, or gently reheat in a saucepan or microwave.

Can you freeze apple sauce?

Yes, you can. Apple sauce freezes brilliantly! Simply put it in a plastic lidded container and put place it in the freezer. It will keep for up to 3 months in the freezer.

Alternatively, you could freeze the apple sauce in an ice cube tray and then, once frozen, transfer to a freezer bag or plastic lidded container. This means you can defrost much smaller portions. (I used to do this all the time when I was weaning my babies!)

Simply defrost apple sauce overnight in the fridge, or in a couple of hours at room temperature, then serve cold or reheat as above. 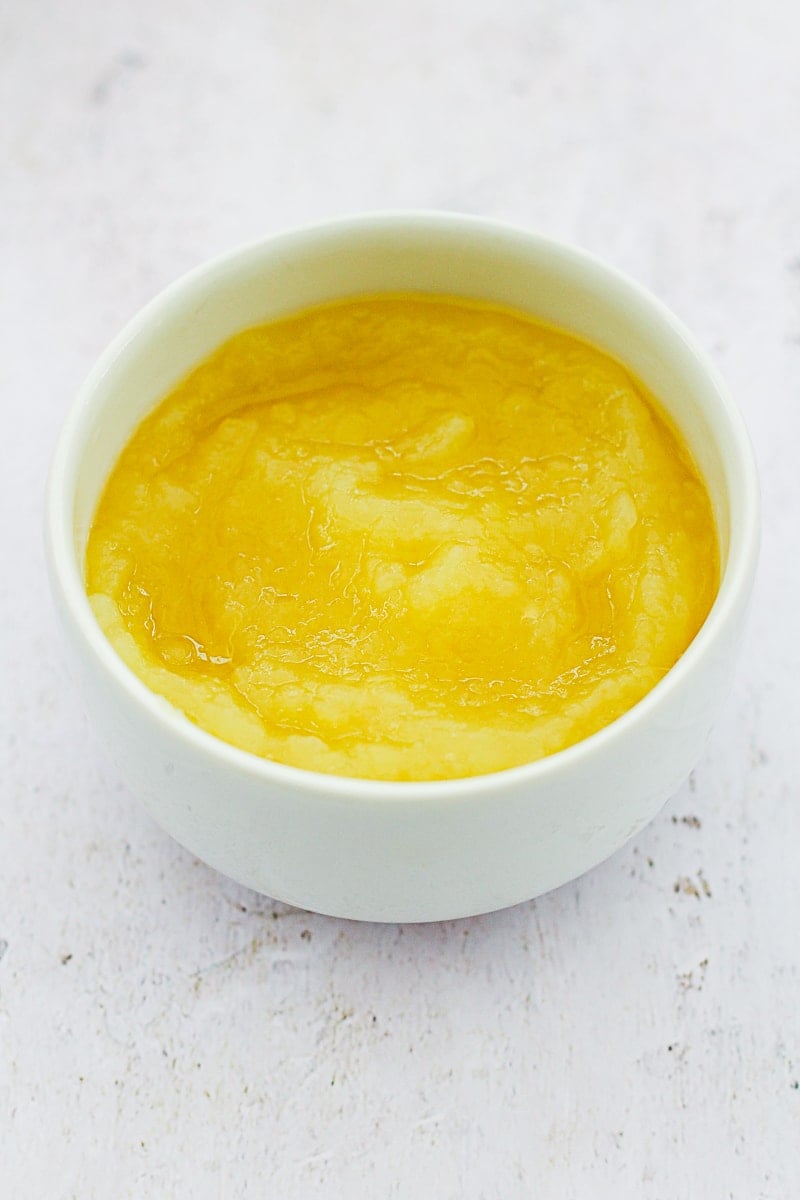 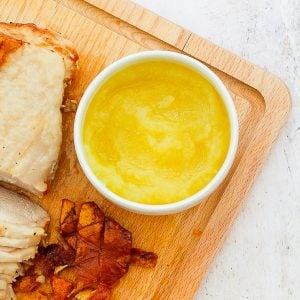 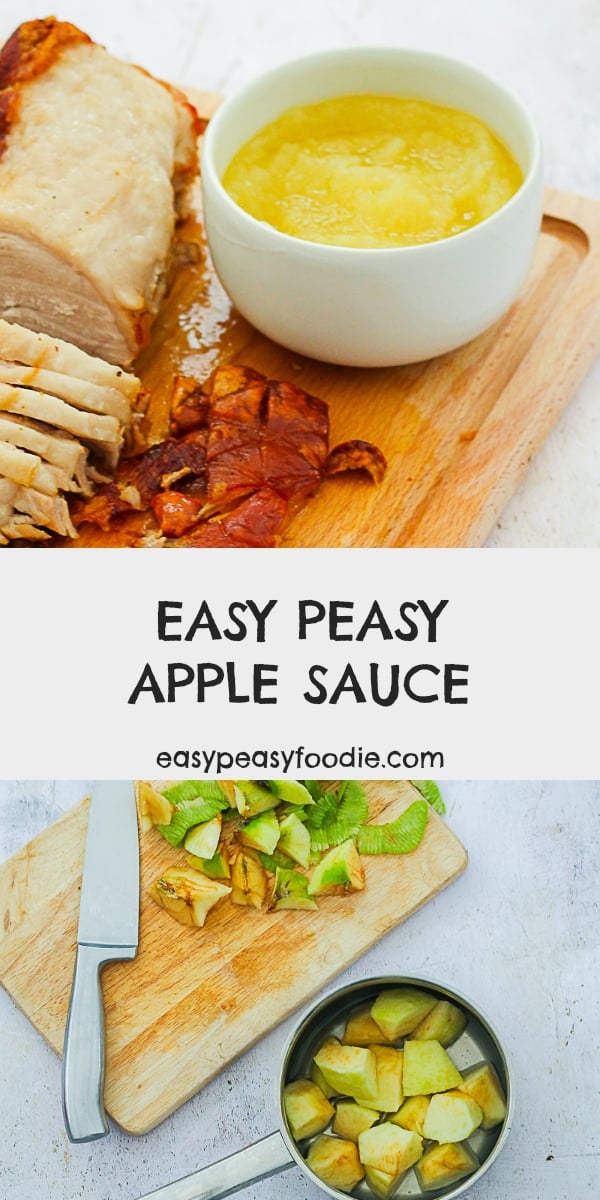 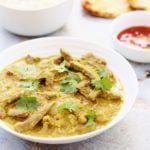 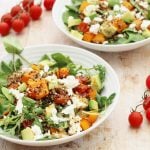 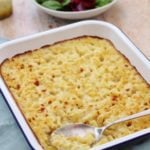 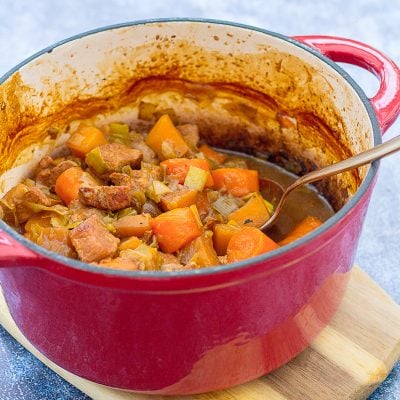