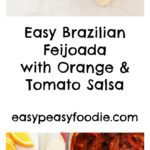 This Easy Brazilian Feijoada is packed with wonderful Brazilian flavours, but takes much less time and effort than the classic version, and is served with a simple and refreshing Orange and Tomato Salsa – a nod to the more traditional accompaniment of orange slices. 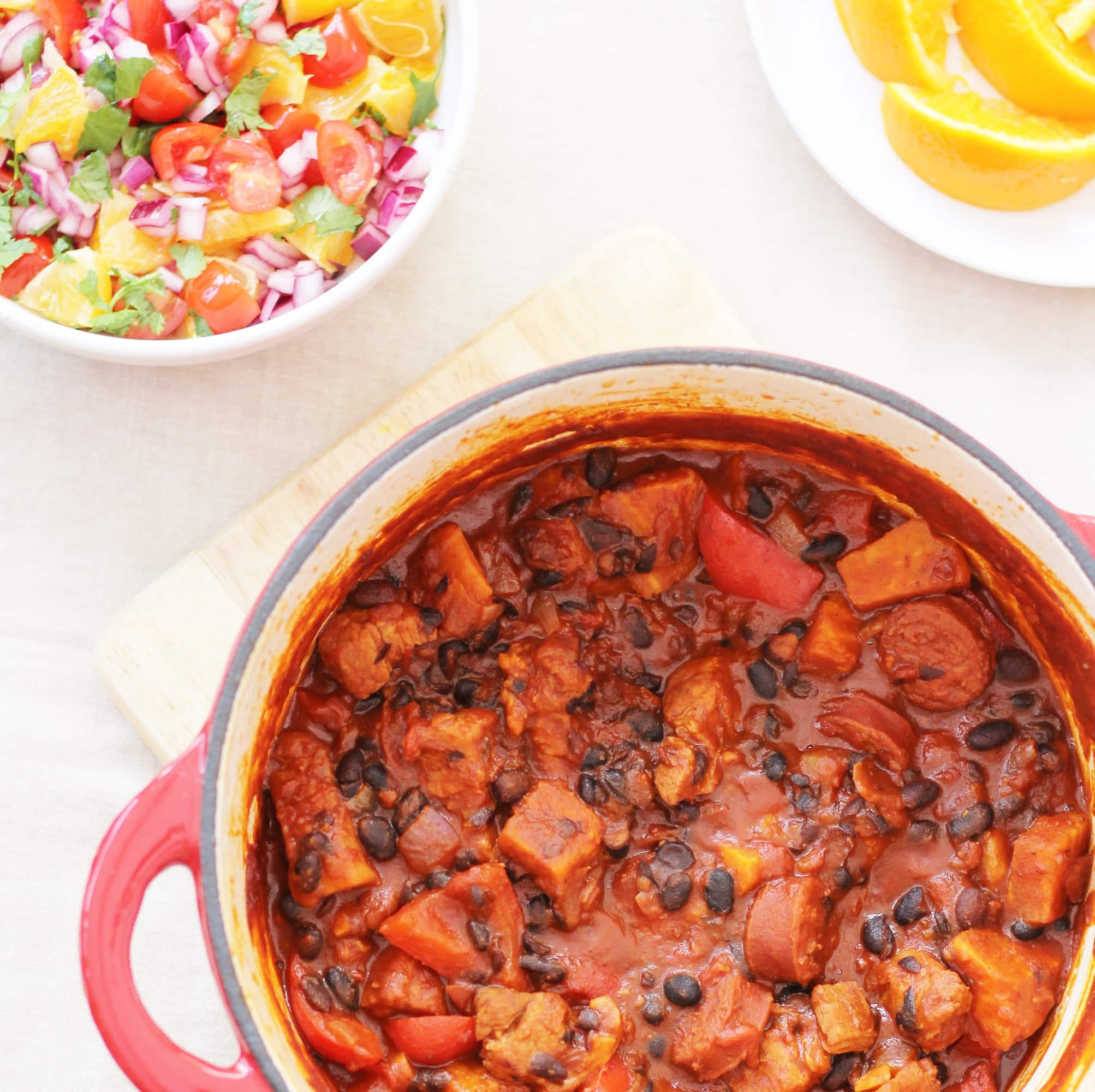 I originally created this delicious dish to celebrate the 2016 Olympics (gosh where has all that time gone?). The 2016 Olympics took place in the Brazilian city of Rio de Janeiro, which has gave me the perfect excuse to find out a bit more about Brazilian food. (I will take any excuse to gawp at pictures of food on Instagram, Pinterest etc.) 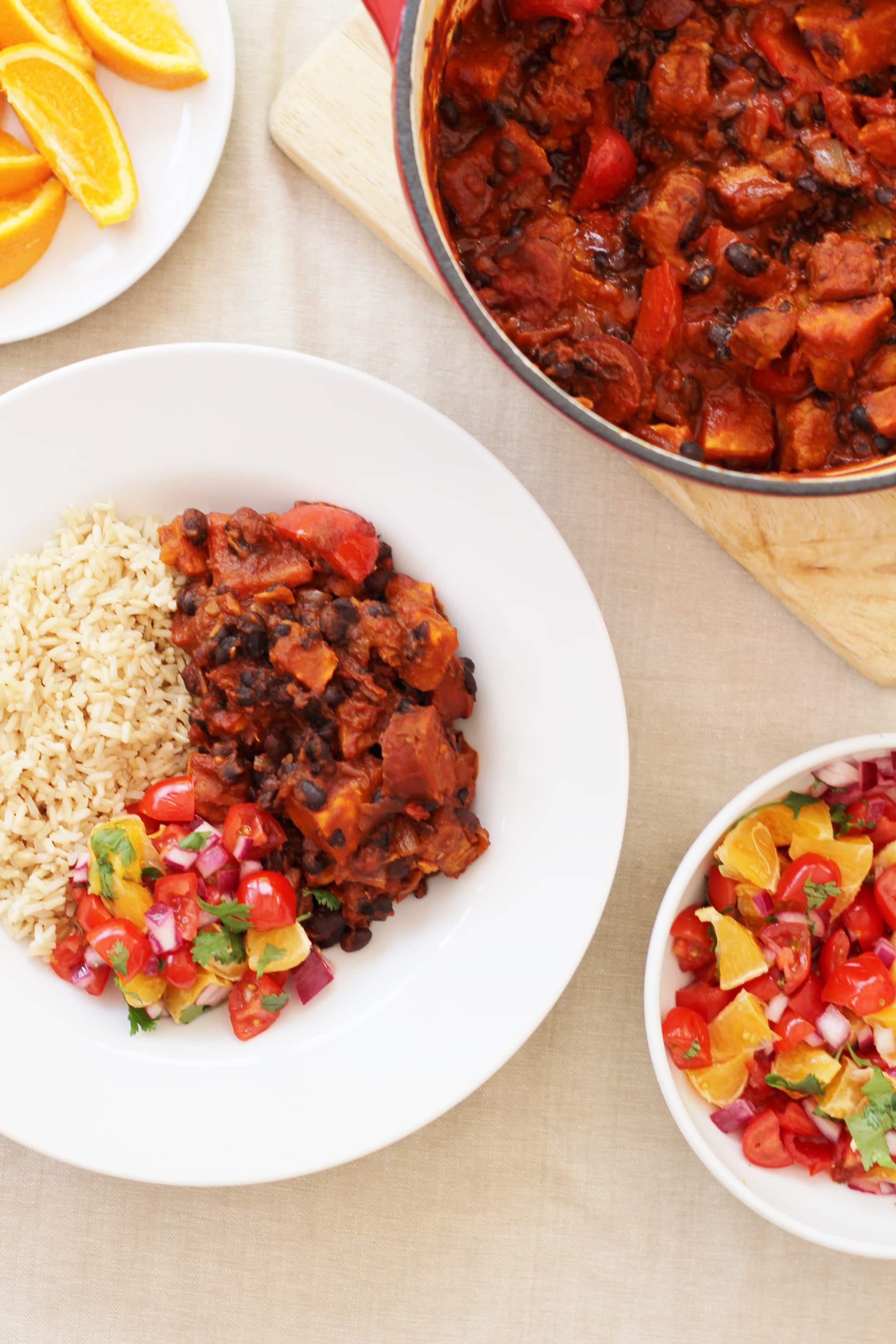 In my extensive research (!) I discovered that Brazil, like so many countries, does not have one national cuisine as such, but rather is a melting pot of many different cuisines, largely influenced by the different nationalities of those who have migrated and settled in Brazil over the years. However, the dish most commonly considered Brazil’s national dish is Feijoada. 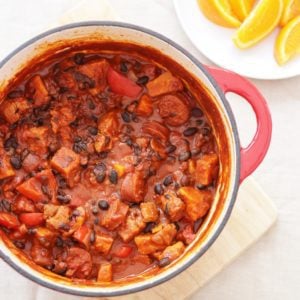 Feijoada (pronounced fey-JWAH-duh, according to the internet), is a slow cooked stew of black beans and various kinds of meat and sausage, traditionally served with white rice and orange slices. 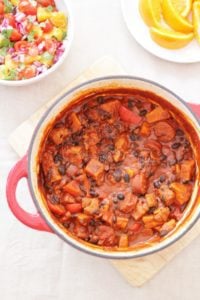 I looked at many traditional recipes for Feijoada and, though the ingredients vary, what they all seem to have in common is they are all rather complicated and time-consuming. Which is hardly surprising since, apparently Feijoada is a celebratory dish, typically served on Sunday afternoons and is meant to be a leisurely affair eaten with friends and family, not a rushed midweek meal.

Well, much as I love meals like that, it’s not something I usually have time for, nor would it really fit in on Easy Peasy Foodie, so I set about creating a simplified version that would be easy enough to do midweek, but delicious enough to be served for a family celebration – I do like to set myself challenges!! 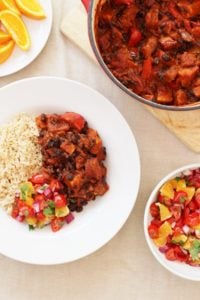 And this is what I came up with…a simple one pot stew of belly pork, black beans and smoked chorizo. I’ve also added in a tin of tomatoes, some sweet potato and a red pepper – partly to lighten, what would otherwise be quite a heavy stew (it is summer after all!), but also to add in some extra nutrition and deliciousness. And, anyway, in some regions of Brazil, apparently it is typical to add veggies into the feijoada, so I’m not going completely off piste! 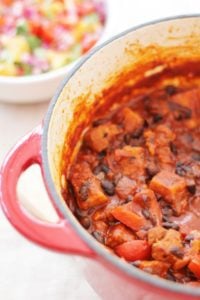 In fact, the addition of veggies makes this stew very easy to adapt if you need to make a vegetarian version – just do everything the same as the recipe below, but lose the meat and add in an extra pepper, a bit more sweet potato and another tin of beans – perhaps something different, pinto beans would be nice for contrast, or maybe black eyed peas – and you will have yourself a fantastic veggie, and indeed vegan, feijoada, still packed with flavour and deliciousness!! 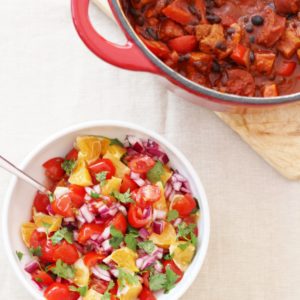 I’ve served my version of feijoada with rice, as is traditional – but I’ve chosen brown rice, as I love the flavour and it is more nutritious than white rice, but white rice would go brilliantly with this too. The other traditional accompaniment to feijoada is oranges, but I decided to adapt this slightly and create a little orange and tomato salsa, which works fantastically to cut through the richness of the stew…and then I threw in a few orange slices to the mix too, as I knew the kids would love them! (And they did!) 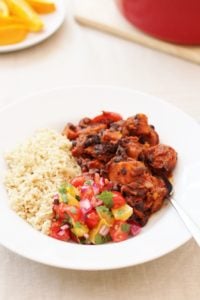 I really wanted to find a Brazilian wine to go with my version of feijoada. I think Brazil could safely be described as ‘up and coming’, as far as wine regions are concerned, and as a consequence I had to search quite hard to find a Brazilian wine in the supermarkets, even in the run up to the Rio Olympics!! I found one in Marks and Spencer’s: a red made from the Teroldego grape (no I hadn’t heard of it either), and a couple in Waitrose: a Chardonnay and a Merlot. I discounted the Chardonnay, as I thought a red would be better suited to this robust meat based stew, but the other two I thought might work. 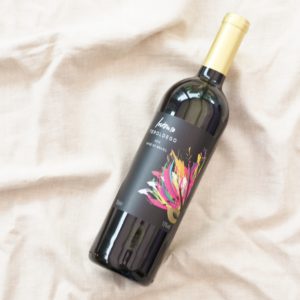 My husband and I had great fun trying both wines with the stew, and while we thought they were both great wines, we both felt the Waitrose Brazilian Merlot was the best partner to the feijoada by quite a way: its juicy, fruity, easy drinking style, with flavours of plum and cherry and just a hint of smokiness, was the perfect partner for this smoky, meaty stew, whereas the slightly bitter blackberry and liquorice flavours of the Terroldego were a little overwhelming – we felt it would be more suited to a steak, or a rich beef stew. 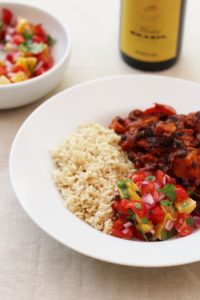 If you want a wine to serve with this stew, but don’t fancy the  trek to M&S or Waitrose – try a Merlot from Chile or Argentina instead. Or if you are in full on Brazil mode you could always go for the traditional Brazilian cocktail: caipirinha. Not convinced it would go with the feijoada, mind…but it would make a fab aperitif whilst you are cooking it!! 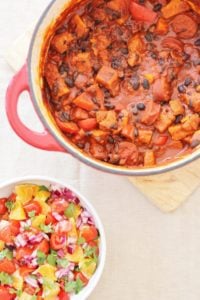 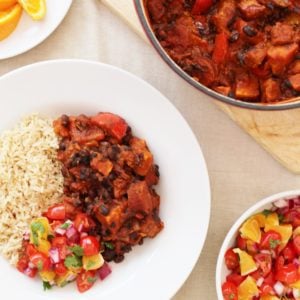 For the Easy Brazilian Feijoada

For the Orange and Tomato Salsa