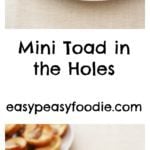 Tiny versions of a British classic, these Mini Toad in the Holes are great as a side dish to a roast dinner or as a main course in their own right, with a few veggies on the side. 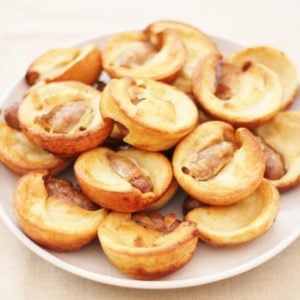 So, did you watch The Great British Bake Off last night? What do you think? Did they choose the right winner? And more to the point, how sad are you feeling about the fact that that was the last Bake Off in its present format? I am gutted!! 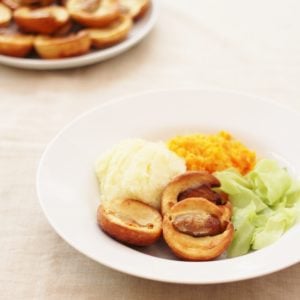 One of my favourite weeks on Bake Off this year was batter week – it was wonderfully different, and I especially liked the challenge that was set to the contestants of making Yorkshire puddings with savoury fillings, not least because it was fascinating to see how a simple dish could cause such experienced and clever bakers so many problems…I’m sure generations of Yorkshire people were laughing their socks off at that particular episode! 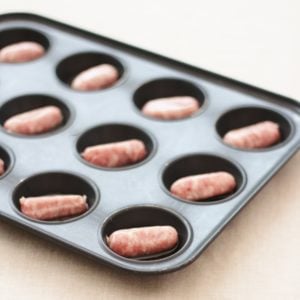 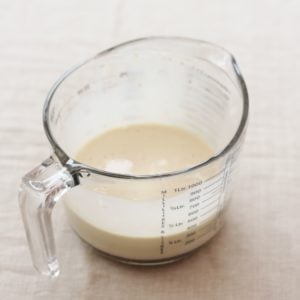 Lots of people, I notice, prefer quite a puffy, crispy Yorkshire, but I must confess: I don’t really like this style. I was brought up on Yorkshires that were flatter and stodgier and that’s the way I like them – am I on my own here? Please tell me I am not!! My Yorkies have a much greater quantity of flour to milk/egg ratio, which makes them denser but also softer and squidgier in the middle whilst being a little bit crisp on the outside, which I really love. 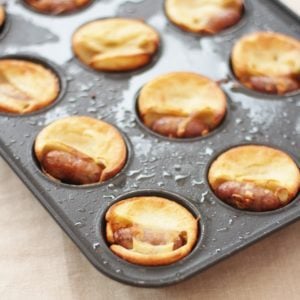 I have shared my recipe for Yorkshire puddings before – it’s actually an adapted version of a Jamie Oliver recipe (so I can’t be entirely on my own with the soft and squidgy thing) and I love it because it doesn’t involve any measuring or any weighing – just a cup that is roughly 200ml. The recipe is one cup of flour, one cup of milk, one egg, one pinch of salt, mix and bake in a hot oven. Easy Peasy! I love doing my Yorkshires in a mini muffin tin – this means everyone gets lots of mini Yorkshire puddings, rather than one or two big ones, they are also less prone to going wrong…and the kids love them! 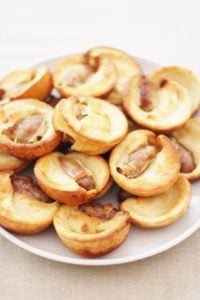 However, what I haven’t shared before is my recipe for Mini Toad in the Holes, which are made in almost exactly the same way, except I add a cocktail sausage into the oil as it heats up in the oven, then pour the batter over the top when the oil is smoking hot. If you want a slightly neater finish you could take the sausages out, pour the batter in, then pop the sausages back on top…but that’s way to faffy for me and I like the slightly more rustic effect you get from just chucking the batter in on top of the sausages and hoping for the best. 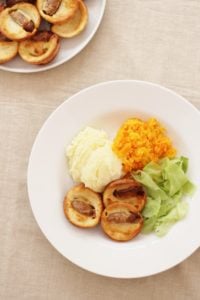 As you can imagine these are hugely popular with my children and are obviously brilliant as part of a roast dinner – either have them as an extra to a roast or eat them as the main course in their own right and then all you need to do is serve with a few veggies, making a very simple meal. They would also make a rather fun canape. 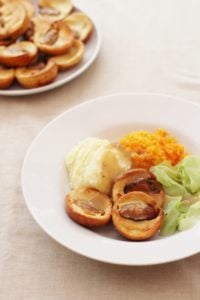 If you want to make these Mini Toad in the Holes veggie, you can easily use veggie cocktail sausages (I believe Quorn make some), or cut up large veggie sausages into small chunks. 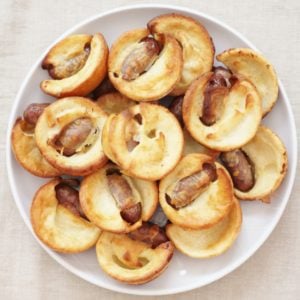 Mini Toad in the Holes

Tiny versions of a British classic, these Mini Toad in the Holes are great as a side dish to a roast dinner or as a main course in their own right, with a few veggies on the side. (Serves 4-6, depending on appetite)
Prevent your screen from going dark
Course Main Course, Side Dish
Cuisine British
Prep Time 10 minutes
Cook Time 20 minutes
Total Time 30 minutes
Servings 18 mini toad in the holes
Calories 92kcal
Author Eb Gargano

Pin Mini Toad in the Holes for later