Ever considered making naan bread at home but been put off by long and complicated sounding recipes? Then my Easy Homemade Naan Bread is for you! I’ve simplified the recipe without compromising on flavour or texture, plus they are oven baked to make them even easier. 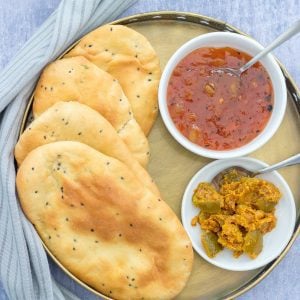 I love naan bread (sometimes known as nan bread). It’s one of those things I just have to have with a curry. I love dipping them into the curry, but also into the pickles and chutneys and raitas too! I must confess I often eat way too much naan bread – it’s just so yummy!! But one thing I have noticed is the ingredients list on most shop bought naans is quite frightening, to say the least. Full of extra random ingredients and unpronounceable gubbins. (and you know how much I don’t like unpronounceable gubbins in my food!!)

Creating an easy peasy homemade version of an authentic naan bread has therefore been on my to do list for quite a while. Like I usually do, I carefully researched the essential components of a naan bread and read a wide selection of recipes (and like so often, the idea of ‘authentic’ is an interesting one as there are so many variations on an authentic naan bread) and then worked out how I could simplify it so that it looked and tasted like a naan bread, but without too many ingredients, processes or faff. 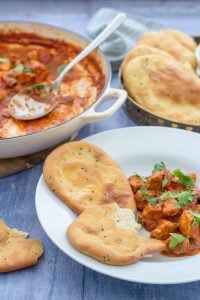 And I am really pleased with the result. It really is a naan bread – way nicer than the shop bought ones (because home cooking always is, am I right?) and nearly as nice as a naan bread from a really decent Indian restaurant (which I suspect has more ingredients and processes than mine, not to mention equipment I just don’t have).

My homemade naan bread recipe has been made easier in two ways. Firstly, I have simplified the ingredients back to only what I really consider to be the essentials: flour, yeast, salt, sugar, yogurt, butter, nigella seeds and water. And secondly, rather than frying or grilling/broiling my naan breads, I have opted to bake them in the oven. This means less faff, less mess, less washing up and crucially it means they take less time too. And the result is honestly no less delicious! 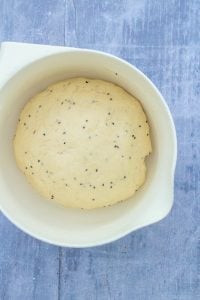 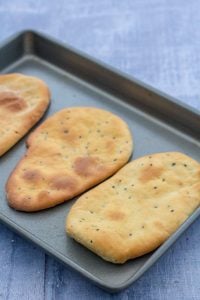 The great thing about these oven baked naan breads is you can make a big batch when you have the time, cook them all up and then freeze them. When defrosted they can simply be reheated by popping them in the toaster until warmed through (or under the grill/broiler if you prefer). You can also do this with any naans which have gone cold (or indeed with the shop bought ones – not that you will ever buy shop bought ones again once you’ve made these, of course…!).

These Easy Homemade Naan Breads would go brilliantly with any of my curry recipes, but I would especially recommend them with my Easy Homemade Chicken Tikka Masala, my Easy Lamb Rogan Josh or my Easy Vegetable Korma. They are also delicious dunked into a cooling cucumber and mint raita or served with an Indian style salad. 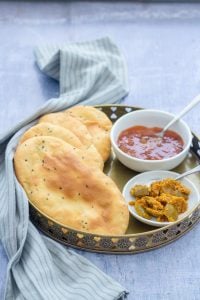 Ever considered making naan bread at home but been put off by long and complicated sounding recipes? Then my Easy Homemade Naan Bread is for you! I’ve simplified the recipe without compromising on flavour or texture, plus they are oven baked to make them even easier.
Prevent your screen from going dark
Course Bread
Cuisine Indian
Prep Time 20 minutes
Cook Time 10 minutes
Total Time 30 minutes
Servings 8 naan breads
Calories 216kcal
Author Eb Gargano

The yeast I have used in the recipe is known variously as easy bake, easy action, fast action, quick or instant yeast. It is the dried, powdered form of yeast that DOES NOT need to be first mixed with water and sugar. The yeast I have used is the kind that can be just chucked in with the rest of the ingredients and therefore makes this recipe easier and less faffy!! You can use the same quantity of regular dry yeast (7g/¼oz) in this recipe if you prefer. If you want to make this with fresh yeast, you will need 14g/½oz. These naan breads can be frozen after they have been cooked. When you require them, simply defrost and then warm through in the toaster or under the grill (broiler). Nutrition information is approximate and meant as a guideline only.
Nutrition Facts
Easy Homemade Naan Bread
Amount Per Serving
Calories 216 Calories from Fat 45
% Daily Value*
Fat 5g8%
Saturated Fat 3g19%
Cholesterol 15mg5%
Sodium 342mg15%
Potassium 74mg2%
Carbohydrates 34g11%
Fiber 1g4%
Sugar 1g1%
Protein 5g10%
Vitamin A 170IU3%
Calcium 23mg2%
Iron 2mg11%
* % Daily Values are based on a 2000 calorie diet
Tried this recipe?Snap a pic and tag @easypeasyfoodie on Instagram, Twitter or Facebook!

Have you got your hands on a copy of my meal plan yet? If not  CLICK here to download a copy of my FREE 4 Week Easy Dinners Meal Plan today!