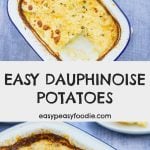 Oozing with cream and garlic and topped with tangy cheddar cheese, these Easy Dauphinoise Potatoes are decadently delicious… yet incredibly easy to make – and virtually foolproof! Perfect for Sunday lunch and celebration meals, but easy enough to make for a midweek treat. 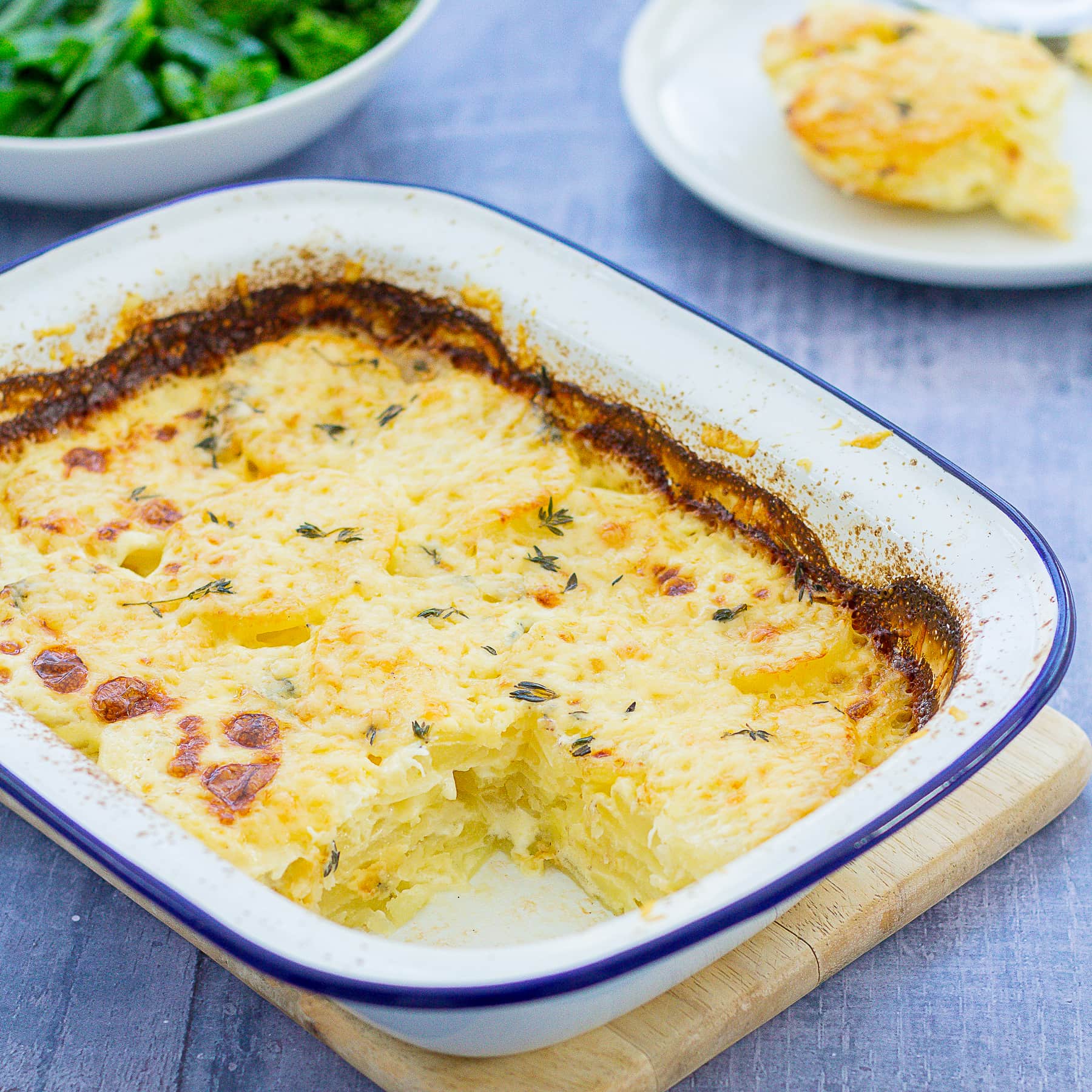 Dauphinoise potatoes are one of my favourite kinds of potatoes… those delicious layers of garlic and cream drenched potatoes, topped with a final layer of tangy cheddar cheese. My mouth is watering right now just thinking about them! 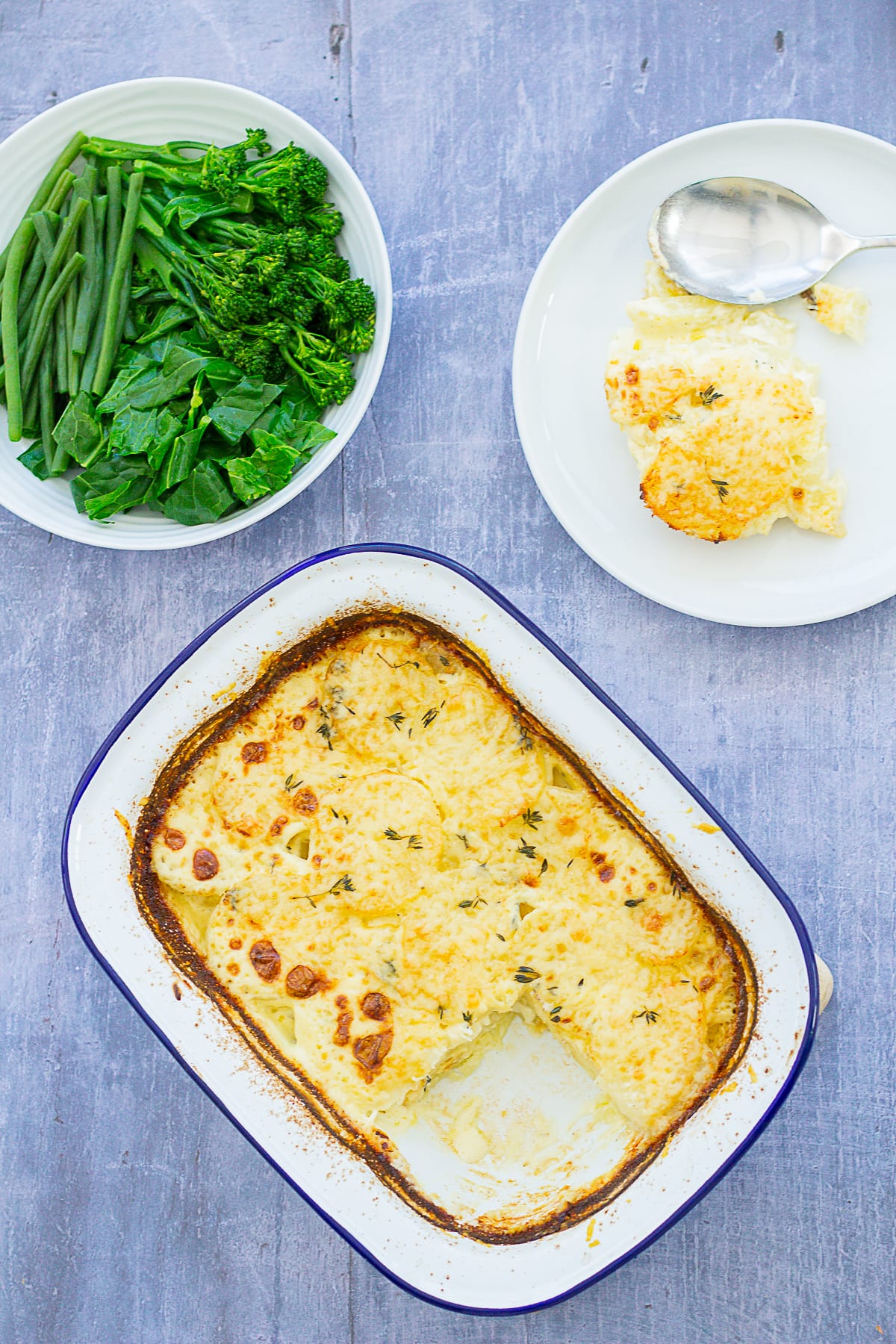 What I can promise you is that this is a very easy peasy recipe for dauphinoise potatoes (would you expect anything less of me?)

To perfect this recipe, I studied dozens of other people’s recipes for dauphinoise potatoes… and believe me, there are a lot of over complicated, unnecessarily faffy recipes out there.

But not my recipe!

All you need to do is slice potatoes thinly (by hand, no need for fancy equipment!), mix cream with garlic and thyme, then layer the potatoes and cream mix, cover with foil and cook for 1 hour.

After 1 hour, remove the foil, scatter with cheese and cook for a further 15-20 minutes until the top is crisp and golden. 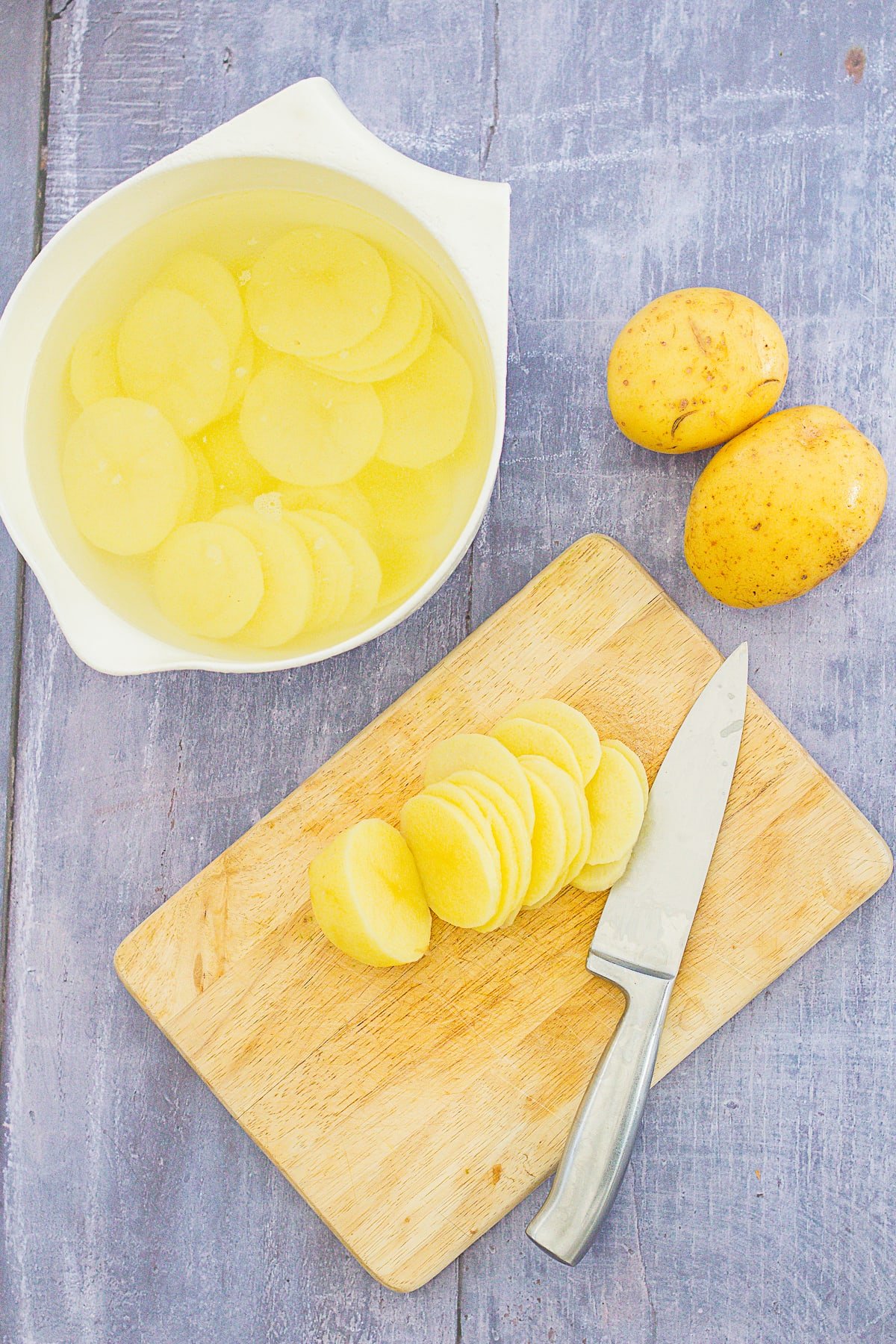 No need to par boil…

Many recipes for dauphinoise potatoes will tell you to par boil the potatoes in milk… but my recipe cuts out this unnecessary and rather fiddly step.

The point of parboiling the potatoes is to prevent the starch from curdling the cream. But you can easily fix this problem by placing the cut potatoes in a large bowl of cold water (which will rinse off most of the starch) and by cooking on a low temperature in the oven (160C / 140C fan / gas mark 3 / 325F).

The other reason why many recipes call for parboiling is to speed up cooking time… but I find this is never a problem as I only tend to make dauphinoise potatoes to go with a roast dinner – which is going to take a long time in the oven anyway. In any case, I love having everything in the oven ahead of time. So much better than faffing around at the last minute! 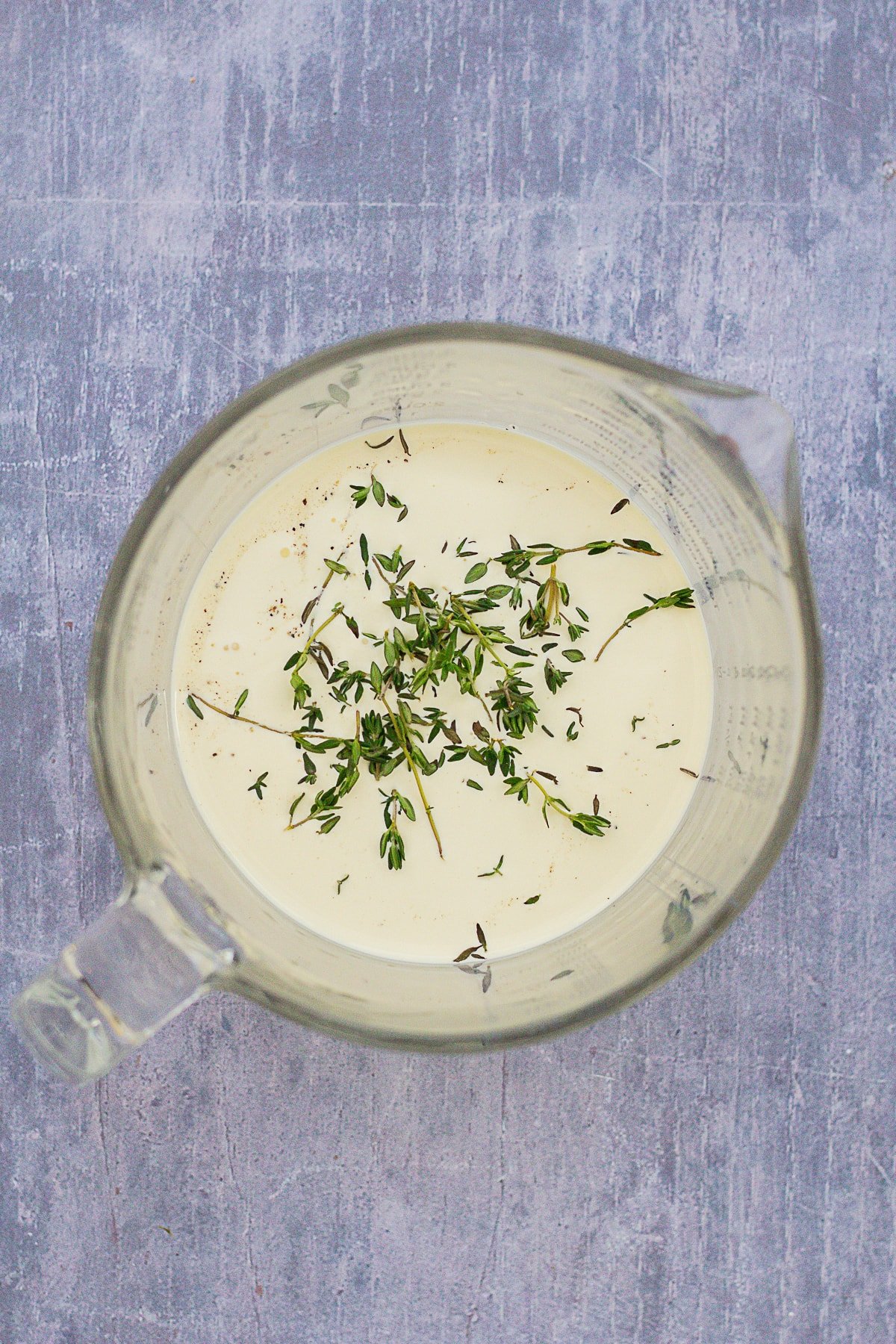 The best cheese for dauphinoise potatoes

I am going to be controversial here and say that the best cheese for dauphinoise potatoes is a good sharp and tangy mature cheddar. Yes, I realise that this is at heart a French dish, and Gruyère is the more traditional choice (and diehard dauphinoise purists say no cheese at all – shocking, I know!) but mature cheddar just has bags more flavour and the sharp ‘tang’ of cheddar cuts through the richness of the cream perfectly, in a way that Gruyère just doesn’t.

And hey, if you’ve been around here a while you know I put ‘tastes good’ above ‘authentic’ every single time. But if you prefer to keep things traditional, or you just prefer Gruyère, by all means stick with the classic French cheese option here. 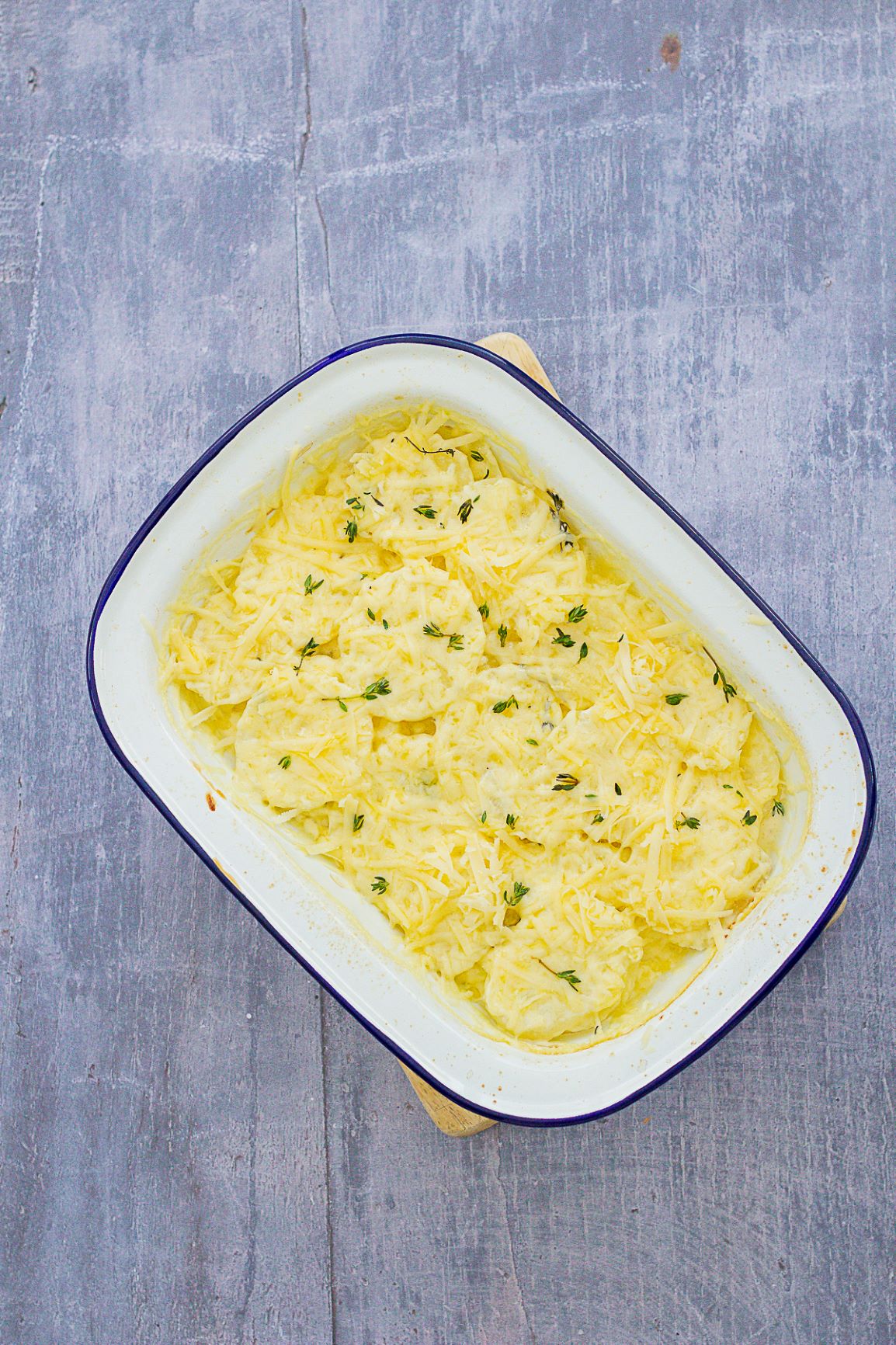 The best potatoes for dauphinoise potatoes

The best potatoes for dauphinoise potatoes are floury potatoes. You can use Maris Piper or King Edwards (or Russet in the US), but I actually find that the best potatoes for getting that perfect balance of soft-but-not-falling-apart is the type of potatoes that are simply sold as ‘baking potatoes’ or ‘white potatoes’.

Avoid using waxy or ‘new’ potatoes as you just won’t get the right texture for dauphinoise potatoes.

How to layer the potatoes for dauphinoise potatoes

Don’t stress about layering the potatoes for dauphinoise potatoes. It’s really not that hard, and it doesn’t have to be perfect. Simply place a single layer of potatoes in the base of your baking dish, then drizzle over a couple of tablespoons of cream, then another layer of potatoes and so on. So long as you ensure each layer is broadly flat and the potatoes are not overlapping too much, you can’t go too far wrong.

To make things super simple, I mix together the cream, garlic, thyme, salt and pepper, so all you need to do is simply alternate a layer of potatoes, then a layer of the cream mix. This ensures all the ingredients are nicely spread throughout this dish. 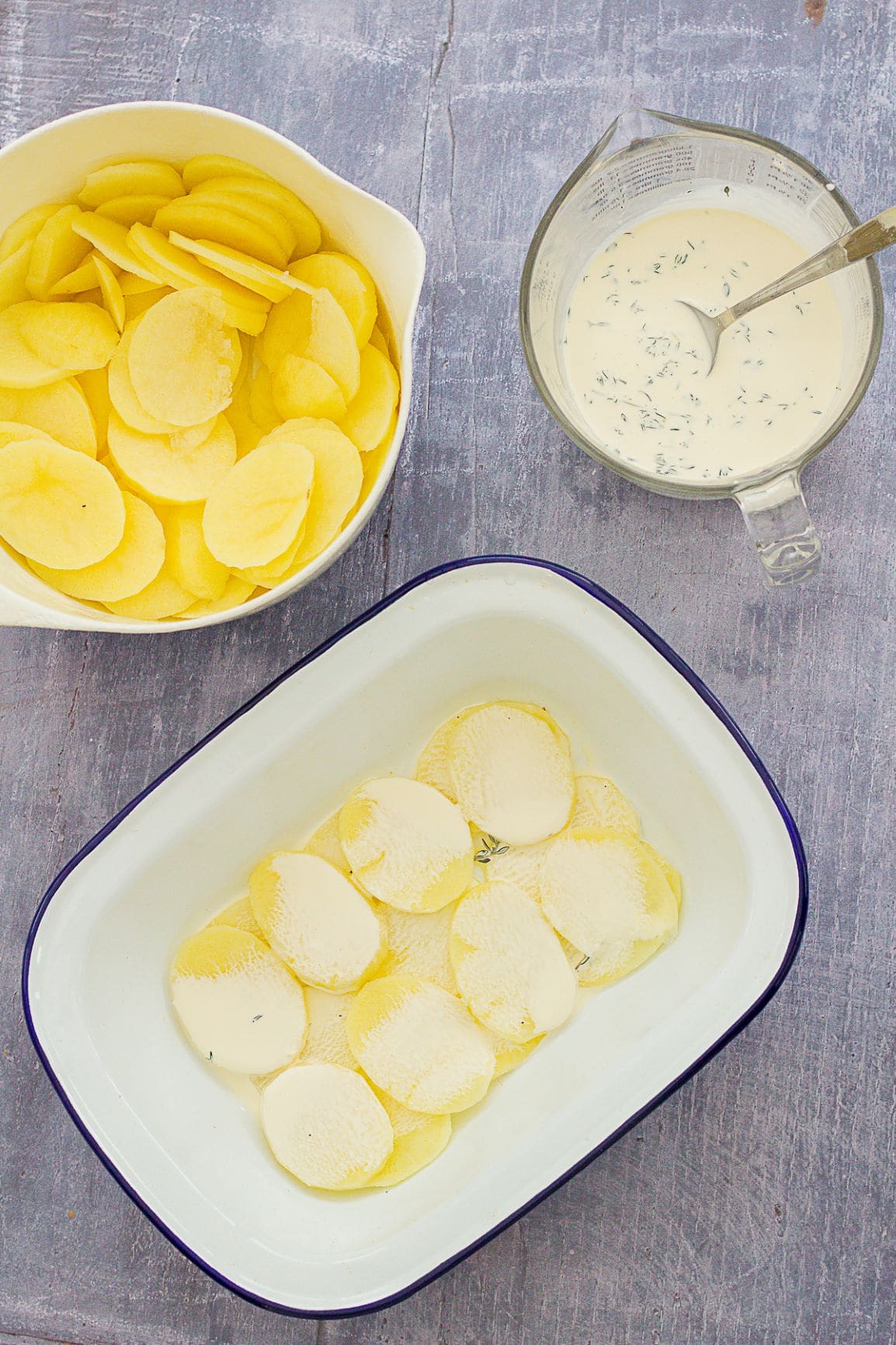 What to eat with dauphinoise potatoes?

Dauphinoise potatoes goes really well with any roast meat, but it works especially well with roast beef and roast lamb. Because of the low cooking temperature, it’s the ideal partner to slow roast meats, as it means everything can be cooked in the same oven at the same time.

My favourite dish to serve this with is my Slow Roast Lamb Shoulder with Garlic and Rosemary. The creamy cheesy potatoes and the meltingly tender garlicky lamb just go so well!

Dauphinoise potatoes also goes brilliantly with fish – especially salmon (you’ve basically got yourself a deconstructed fish pie!) and sausages too.

And, if you want to, dauphinoise potatoes can even work as a main dish in its own right, with some simply cooked vegetables on the side. 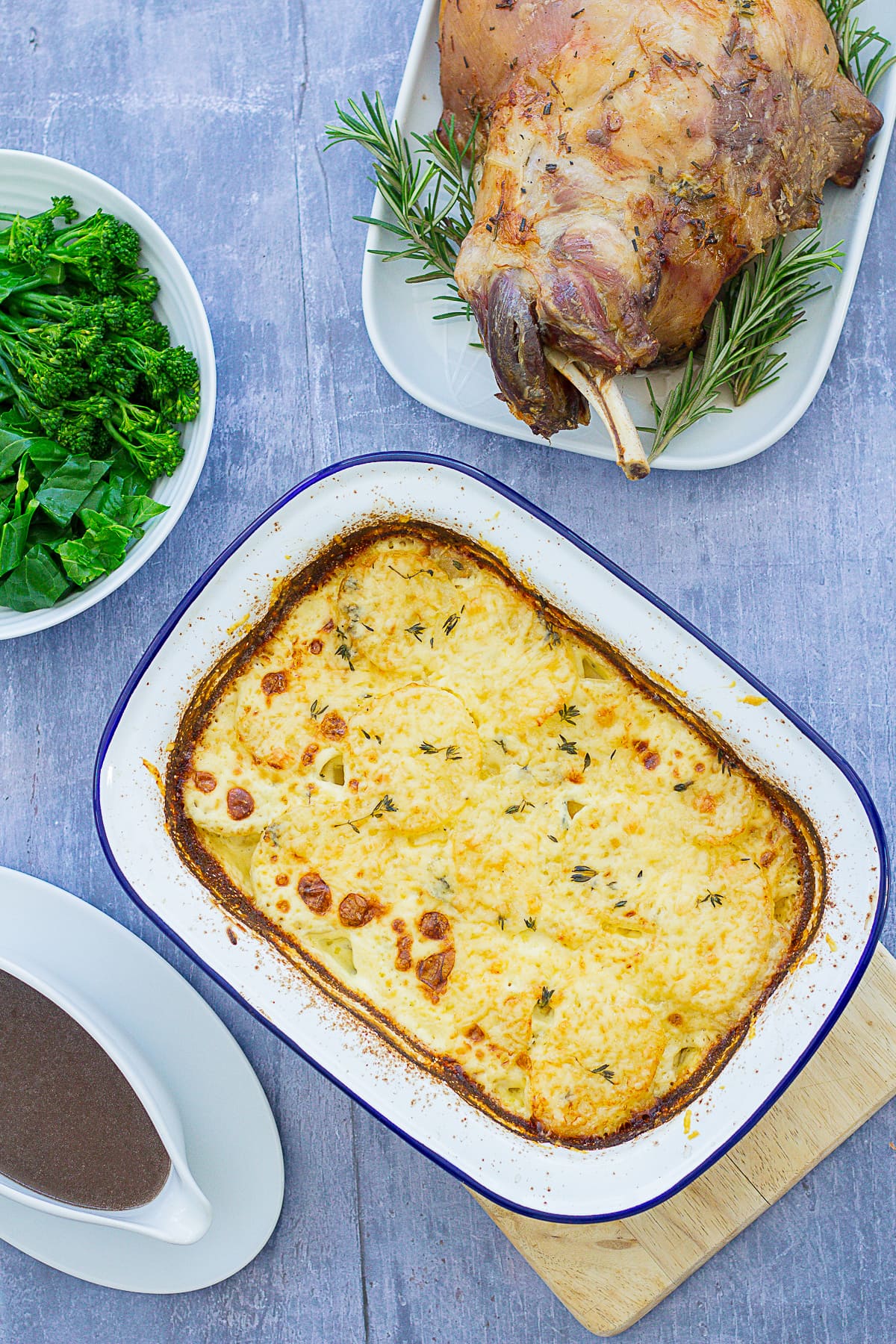 What to drink with dauphinoise potatoes?

But, in all honesty, if you are serving dauphinoise potatoes with meat or fish, you are better off matching the wine to the meat or fish, rather than the potatoes!

Can you reheat dauphinoise potatoes?

Yes, you can, but it won’t be quite the same. It will still taste nice, but it will be drier (the cream won’t ooze in quite the same way) and the potatoes will be softer. But, hey – how bad can things really get when you have cream, potatoes, cheese and garlic?

To reheat dauphinoise potatoes, place them in an oven proof dish, covered with foil, and cook at 180C / 160C fan/ gas mark 4 / 350F for 15-20 minutes, or until piping hot all the way through (how long it will take really depends on how big a piece of dauphinoise potatoes you are cooking.)

You can, in theory, reheat dauphinoise potatoes in the microwave, but I don’t recommend it – it won’t be nearly as good. 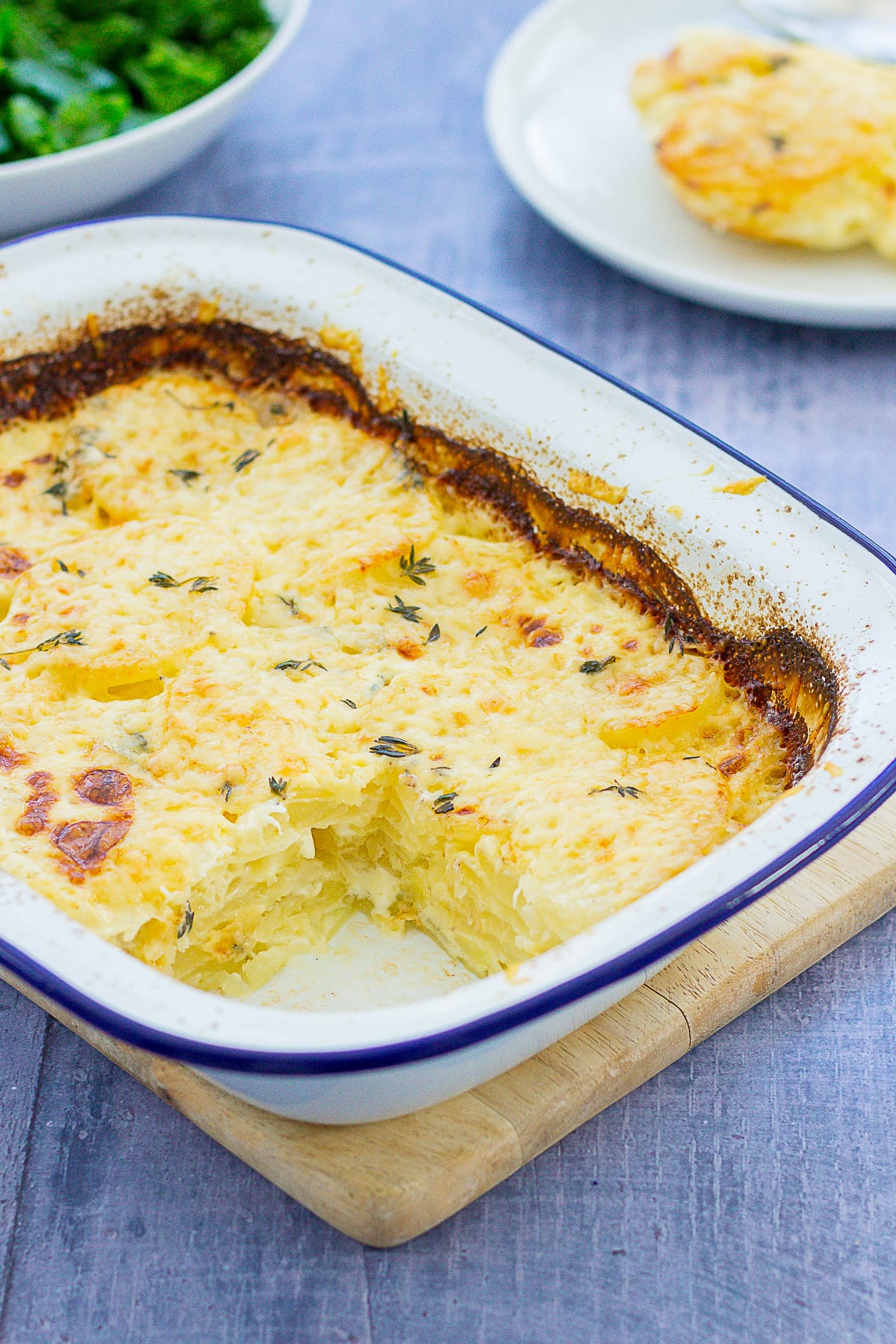 Can you freeze dauphinoise potatoes?

Dauphinoise potatoes can be frozen, but you will lose some of the texture and the flavour won’t be quite as good either.

If you want to give it a try, simply place in a plastic lidded container and put it in the freezer, where it will keep for up to 3 months.

Defrost overnight in the fridge and reheat as above. 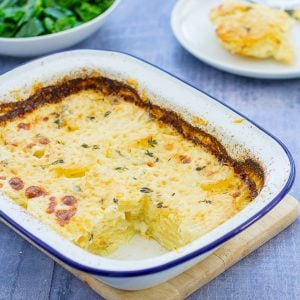 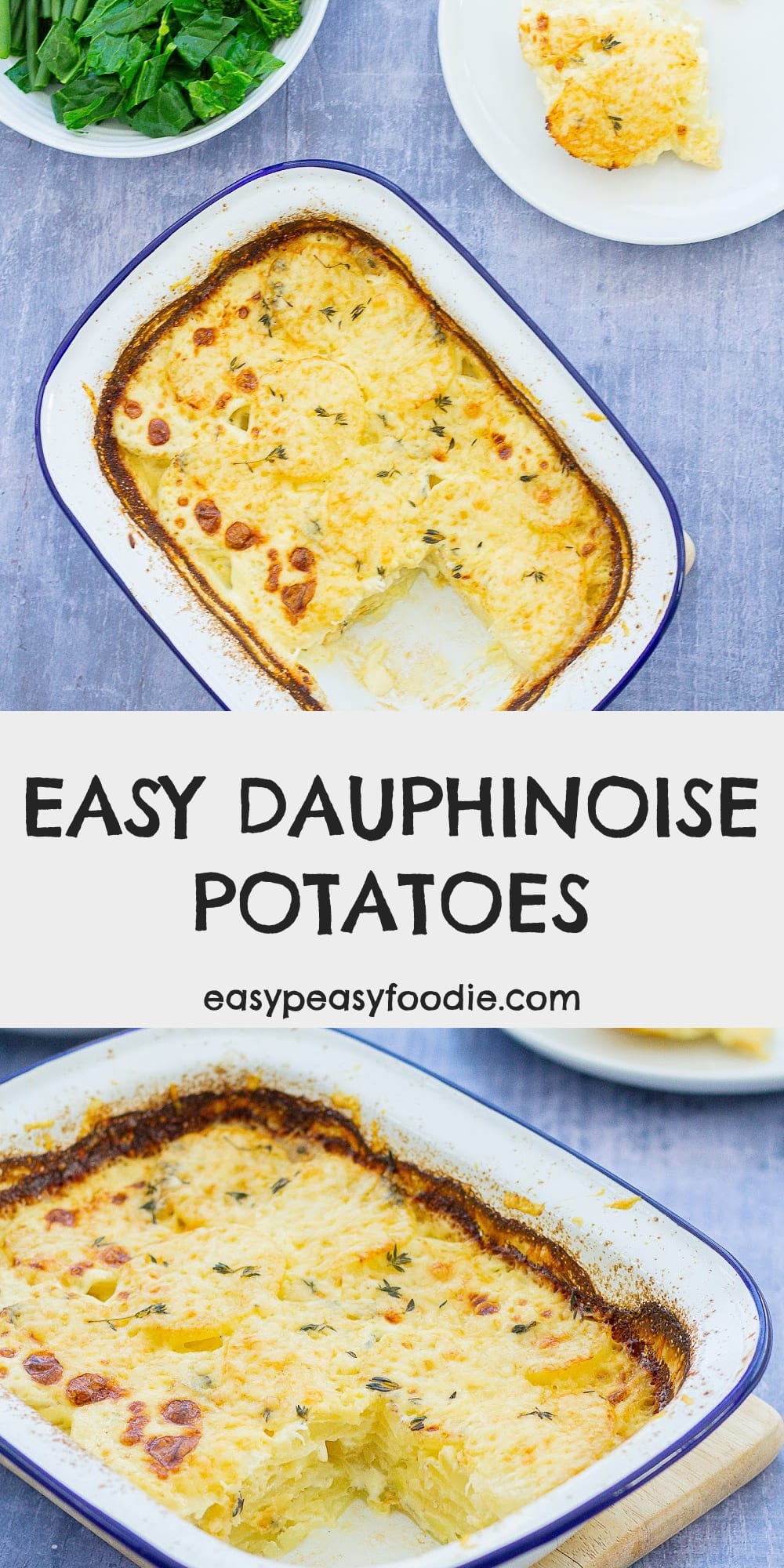