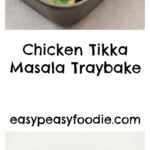 Fancy a nifty twist on an Indian classic? Then you are going to love my oh-so-easy Chicken Tikka Masala Traybake! This delicious recipe features all the flavours of a Chicken Tikka Masala in sheetpan form… big on flavour, low on effort and only one pan to wash – what’s not to like? 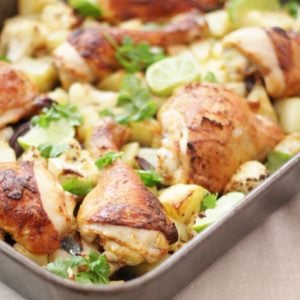 As you have probably gathered by now, I am a HUGE fan of traybakes – I absolutely love them – I love the concept of just being able to throw together a few delicious ingredients, pop them in the oven and in less than an hour you have a delicious meal and a well-rested chef 😉 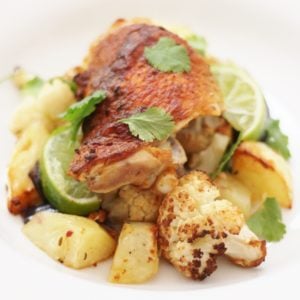 Better still, roasting things in the oven often gives them a better flavour, and sometimes even a better texture, than cooking them on the hob. That is most certainly true in this dish. The slightly charred, roasted cauliflower is infinitely better than its boiled cousin and the crispiness of the chicken skin just wouldn’t be possible by any other method – and I really don’t need to tell you how wonderful potatoes are when roasted, now do I? 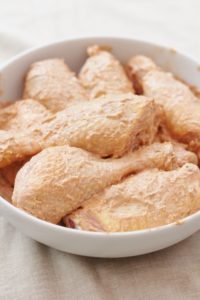 Not only am I a huge fan of traybakes, but I am also a big fan of curry – I’ve made a fair few recently – as I am sure my regular readers will attest to! I’ve talked before about how curries, for me, are the perfect mix of easy, healthy and delicious – but usually I make curry in fairly conventional ways, either on the stove top or slow cooked in the oven – I’ve never tried a curry traybake before…until now! 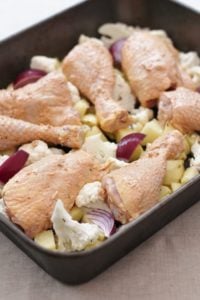 It’s been an idea I’ve had niggling away at the back of my mind for some time, though,  so I thought I’d better get on with it – especially given that this week is National Curry Week! I decided to go with a simple tikka masala type marinade for the chicken and use one of my favourite cuts of meat – chicken thighs, as they work so well in a traybake – I also threw in some chicken legs too. I just knew the marinade on that lovely crispy skin would work so well, but then the question was – what else should I put in the tray? 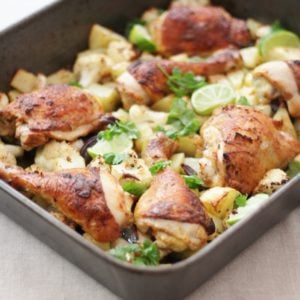 One of my other favourite curry dishes is Aloo Gobi – that delicious combination of cauliflower and potatoes with Indian spices – and given the fact that both cauliflower and potatoes are amazing when roasted, throwing these two ingredients into the tray, along with some cumin seeds, seemed like a no-brainer. Now all that was left was to test the theory – and I’m pleased to say – it worked! (Well I wouldn’t be sharing it here if I didn’t, would I?) 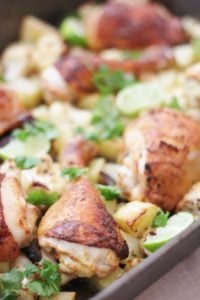 This simple traybake is a meal in itself and really needs no extra accompaniment, however if you want to, you could serve it with some naans or rice and all your favourite pickles, chutneys and raitas… and turn this dish into a feast! 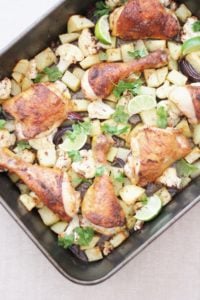 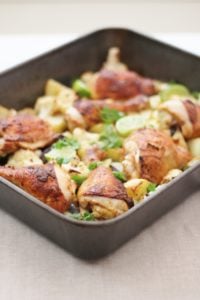 Wine wise, I think this would be brilliant with a vibrant Sauvignon Blanc from Chile or NZ. My husband would always have a beer with curry! He suggests a crisp, refreshing lager such as Goodwood Sussex or Anchor Steam Beer. 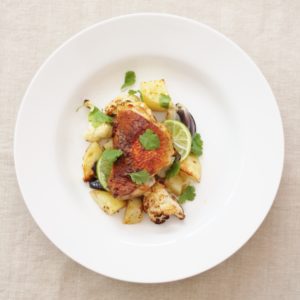 Fancy a nifty twist on an Indian classic? Then you are going to love my oh-so-easy Chicken Tikka Masala Traybake! This delicious recipe features all the flavours of a Chicken Tikka Masala in sheetpan form... big on flavour, low on effort and only one pan to wash - what's not to like?
Prevent your screen from going dark
Course Main Course
Cuisine British, Fusion, Indian
Prep Time 15 minutes
Cook Time 40 minutes
Total Time 55 minutes
Servings 4 people
Calories 492kcal
Author Eb Gargano