I really love pizza, but what I really, really love is homemade pizzas and they really aren’t very difficult to make. My daughter is only six and a half and she can already make these pretty much on her own. This is a great recipe to make with kids as it is so much fun and the result is so delicious! 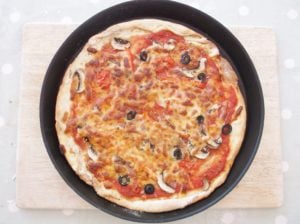 I have seen many recipes for quick and easy pizzas, but they all seem to involve using self-raising flour which results in a scone-style base which to me tastes all wrong.

My little cheat is that I use a packet of ciabatta bread mix, which you can easily get from most supermarkets. However I’ve included the recipe for making the bases from scratch too, in case you’d rather do that. 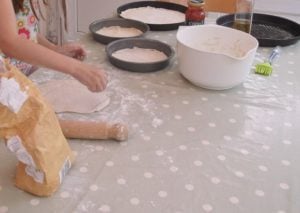 I also don’t bother to knead or prove my bread dough – SHOCK, HORROR…I hear you gasp! But the reason is very simple: if you treat bread like bread, it will behave like bread and puff up in the oven giving you a very thick bready base. But by doing it my way and not kneading the pizza dough or leaving it to rise, it doesn’t puff up and instead gives you a super thin, super crunchy base, which is what I love! And I think I am not alone!! 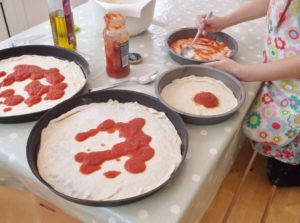 The toppings below are what we would use for our pizzas, but they are very much just a suggestion. If you like other stuff on your pizza, do that instead. But be careful not to load your pizza up too much or it will take ages in the oven and you’ll end up with a soggy bottom and burnt cheese. Less is definitely more in pizza world, I find! 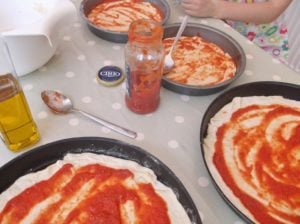 A little tip: a whole pizza is too much for my kids, so I went out and bought 2 basic 7inch cake tins. They are the perfect size for my two (aged 5 and 6½) and means they can both make their own – much nicer than having to share one. (Although you could always let them make a large one each and use the leftovers in their lunchboxes the next day!) 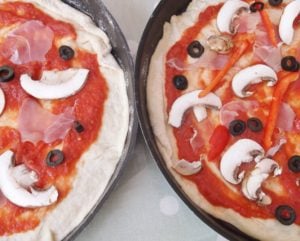 I get the kids to grease their tins, then we make up the pizza base mix together. I then divide the dough up and give each child a bit to roll out to roughly the size of their tin. They each get a blob of passata to spread and then I let them put whatever they want on the top before cooking then in the oven for 10 minutes at 220oC. So easy and so much fun (though admittedly the tidying up afterwards is not so much fun!) 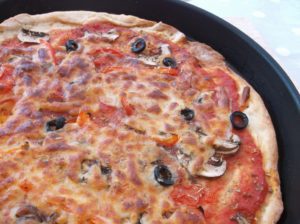 Note: if you don’t have proper pizza tins, you can use baking trays, roasting trays or any other metal tray that will go in the oven. Just make sure you grease them well with olive oil or the pizzas will stick! 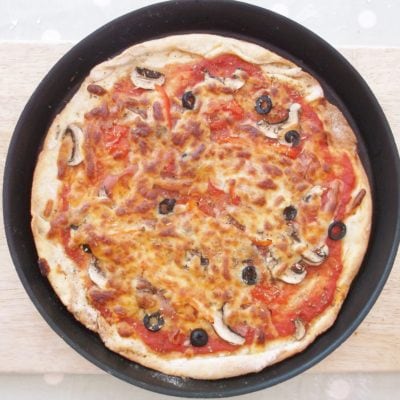 Or, if you’d rather make the bases from scratch:

Makes: 4 adult sized pizzas or 8 child sized pizzas
Takes: 30 minutes (but probably a bit longer if you let the kids help!)
Tried this recipe?Snap a pic and tag @easypeasyfoodie on Instagram, Twitter or Facebook!