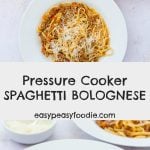 Want that slow cooked spaghetti bolognese taste but in a fraction of the time? Then you need to try my Pressure Cooker Spaghetti Bolognese – gorgeous depth of flavour and melt in the mouth texture… but done in just 30 minutes! 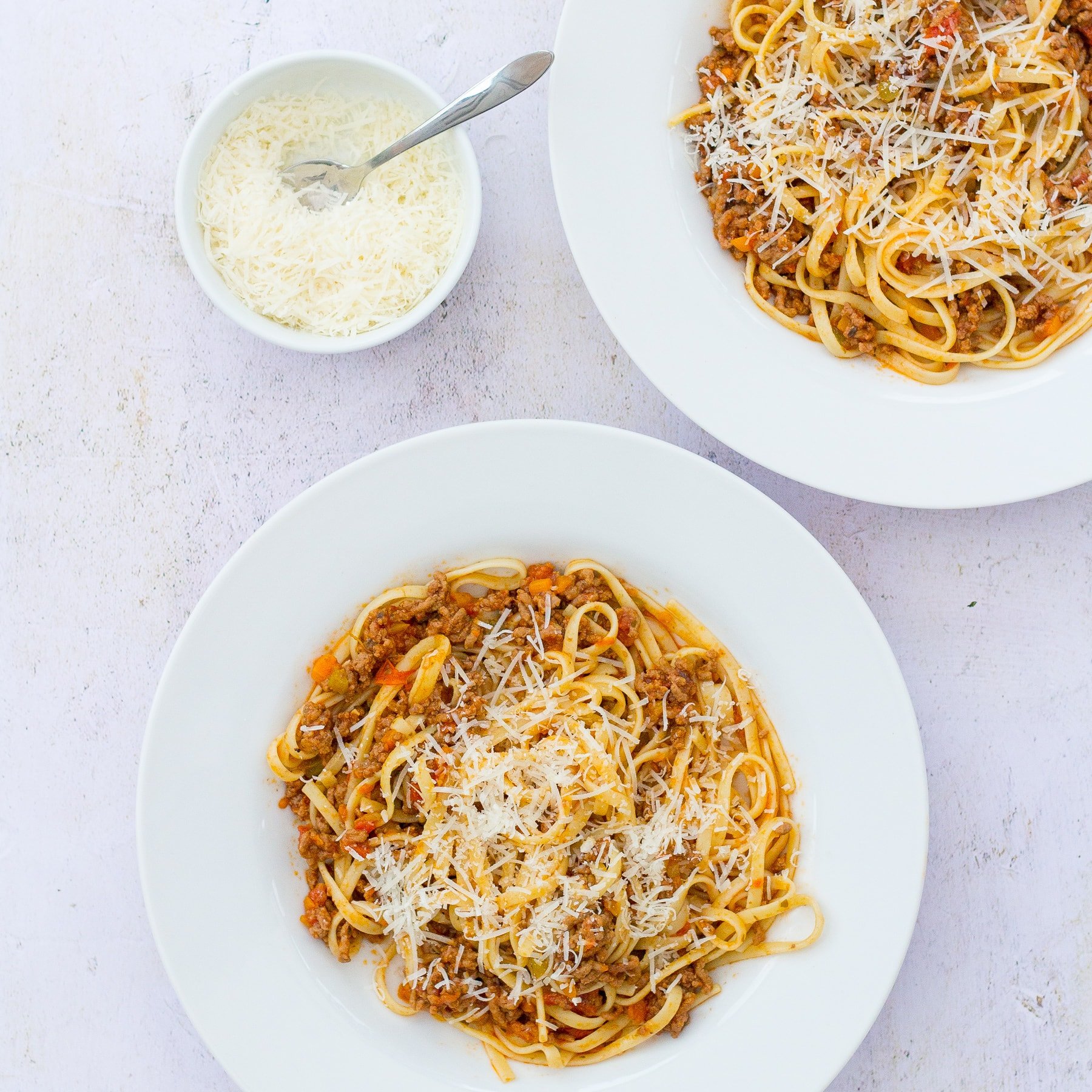 I just LOVE slow cooked food – don’t you? That long slow cooking time works some kind of crazy magic on food… the flavours mix and mingle in a way that gives so much extra depth and deliciousness. And the texture of even the toughest cuts of meat becomes unctuously soft… to the point of melt-in-the-mouth wonderfulness.

But the problem with slow cooked food is TIME!

Slow cooked food is fine on a day when I am at home at precisely the right time to put the food in the slow cooker or in the oven on low… not so much on those manic crazy days when I’m juggling work / kids / playdates / afterschool clubs and a whole host of other appointments… AKA real life!

Which is why I adore my pressure cooker so much. This wonderful kitchen gadget gives me all that slow cooked deliciousness, but in a fraction of the time! 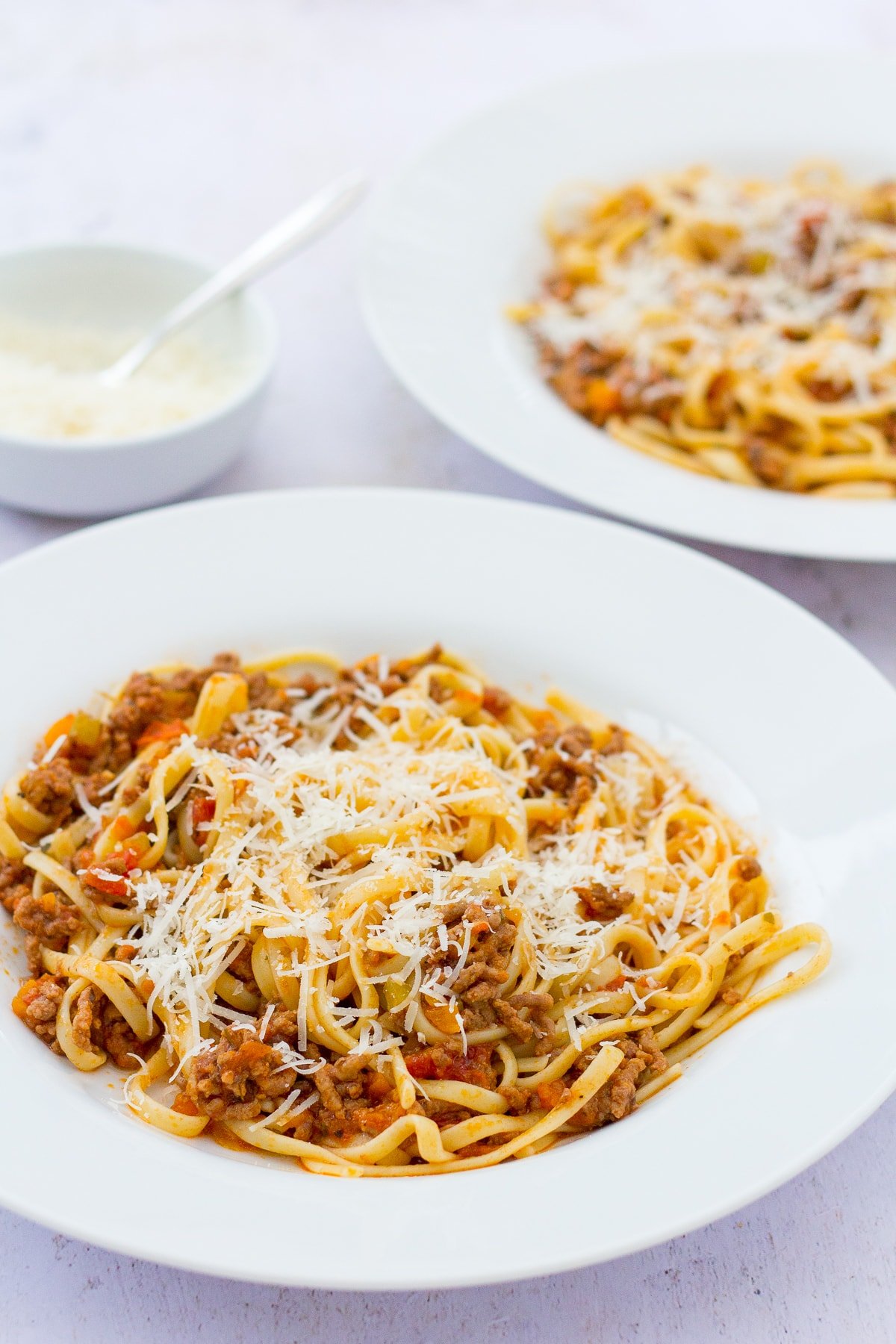 I have been playing about with my recipes, trying to figure out which ones will work best in a pressure cooker and I’ve hit on a total star with this Pressure Cooker Spaghetti Bolognese!

A bolognese sauce is one of those recipes that tastes OK done fast, but a million times better slow cooked. But who has the time for that?

Enter my trusty pressure cooker! Pressure cooking my bolognese sauce results in an incredible depth of flavour and such tender beef… it is well worth the teensy bit of extra effort it takes to do this in a pressure cooker, rather than a regular frying pan.

As an extra bonus the vegetables almost melt into the sauce, meaning you can get lots of goodness into fussy small people without them really noticing! 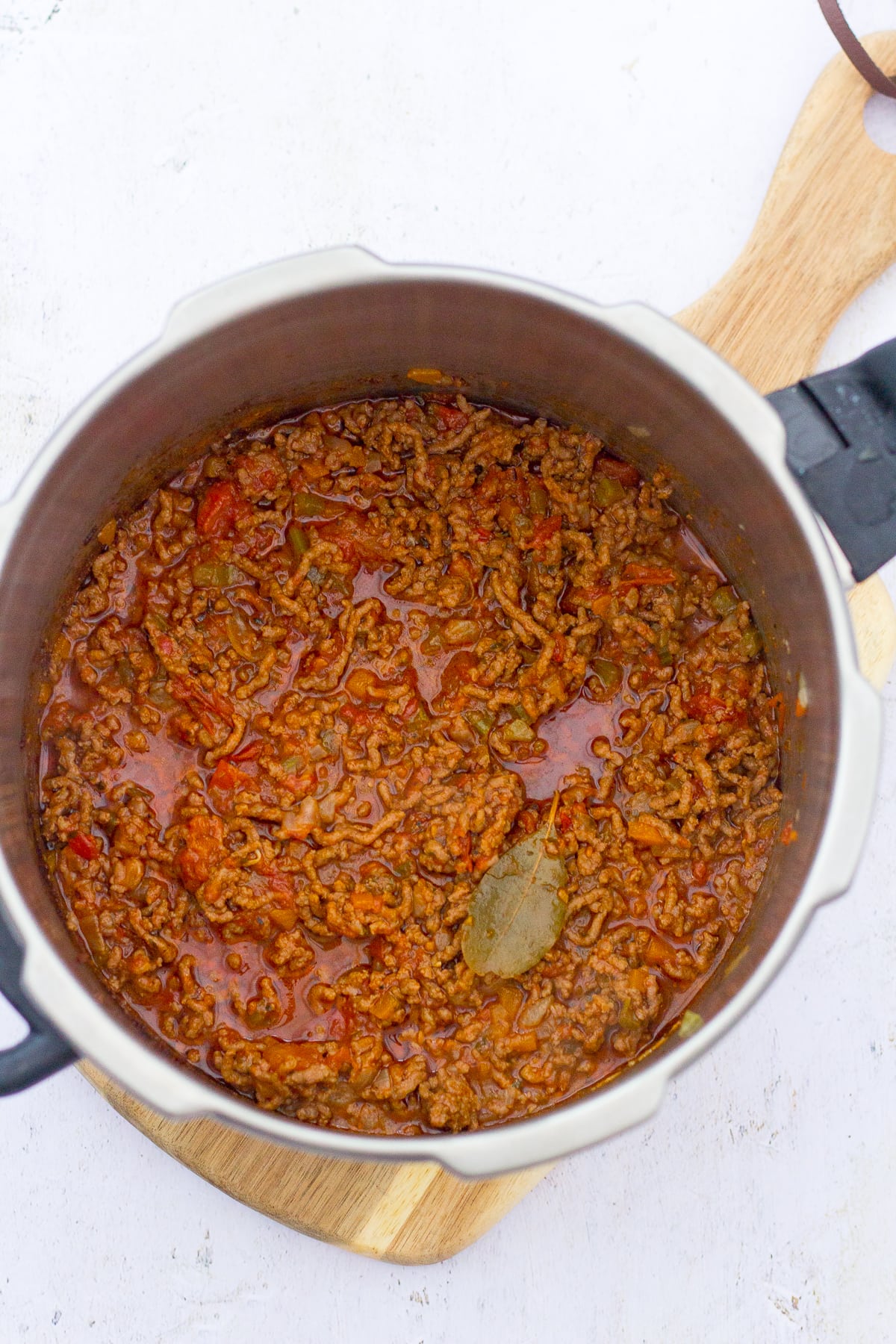 How to cook spaghetti bolognese in a pressure cooker?

I’ve kept to a very classic recipe here, starting by frying a soffritto (mix of finely diced carrot, celery and carrot) and some lardons (diced bacon).

Next, I brown off my beef mince, before adding a clove of garlic and then a tin of chopped tomatoes and a beef stock cube (or stock pot).

Finally, I add some oregano, bay, salt and pepper, then put the lid on and bring the pressure cooker up to high pressure.

I cook the bolognese sauce for 15 minutes at high pressure (12psi), before turning the pressure cooker off, releasing the valve and waiting until it comes back to normal pressure, before taking off the lid and serving up.

From start to finish this bolognese recipe takes just 30 minutes, but tastes like you’ve been slaving over the stove for hours! 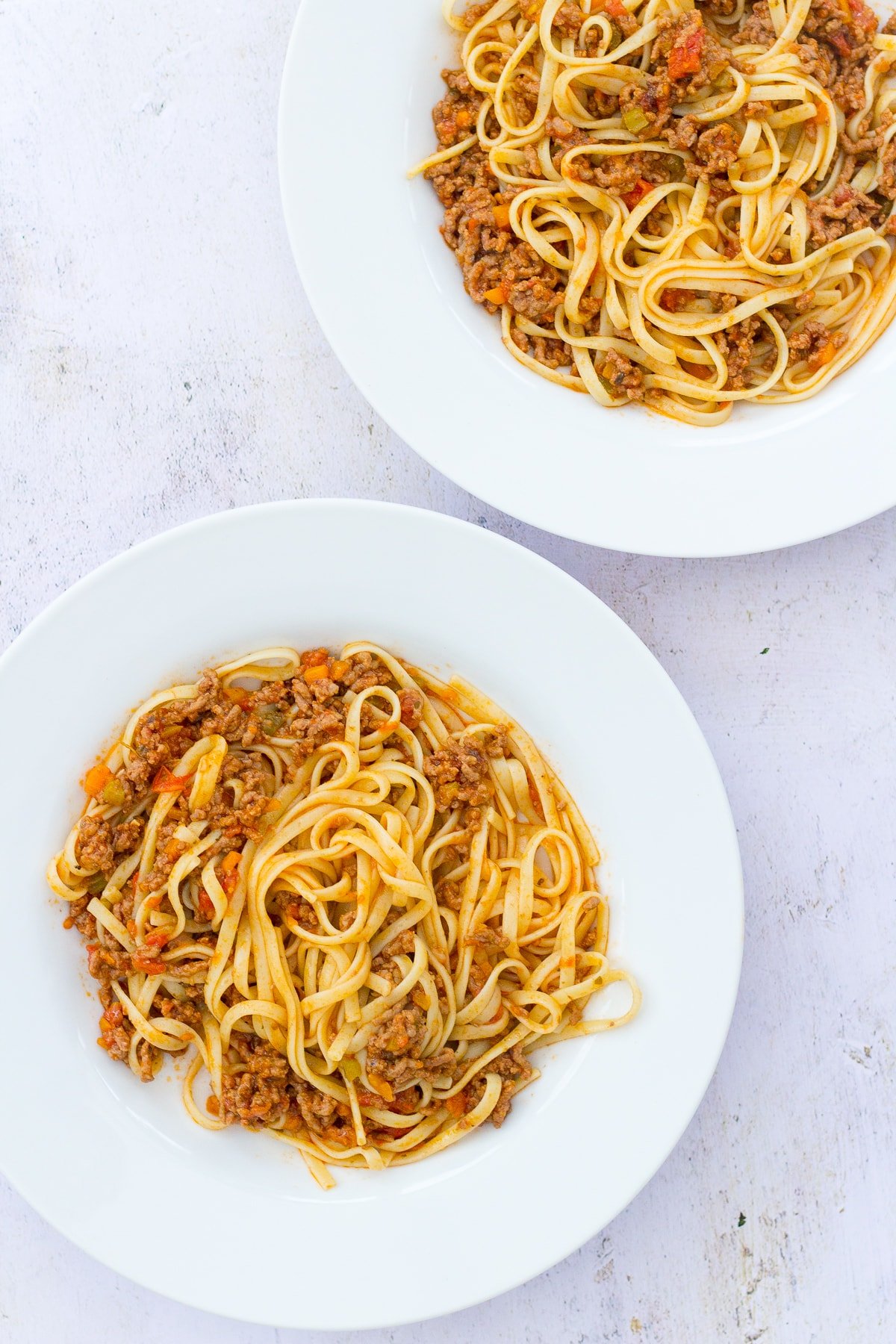 Can I make this spaghetti bolognese recipe without a pressure cooker?

If you do choose to cook this in a conventional saucepan, do also check the sauce occasionally to see if it’s starting to stick, and if so, add more water as needed.

What to serve with pressure cooker bolognese?

Well the obvious thing to serve with this pressure cooker bolognese is, of course, spaghetti! However, this sauce also goes wonderfully with a wide variety of pasta shapes – my personal favourite is linguine (pictured here) but, it will also work well with tagliatelle, fusilli, penne etc.

This sauce is also ridiculously delicious with brown pasta (brown penne is my fave) – perfect if you want to give this dish a bit of a healthy twist!

It will also go well with rice, mashed potatoes, crusty bread or even on top of a baked potato!

And of course, you can use this sauce as the base for a classic beef lasagne.

I prefer to serve my spaghetti bolognese scattered with grated parmesan, but you can use good ol’ cheddar if you prefer! 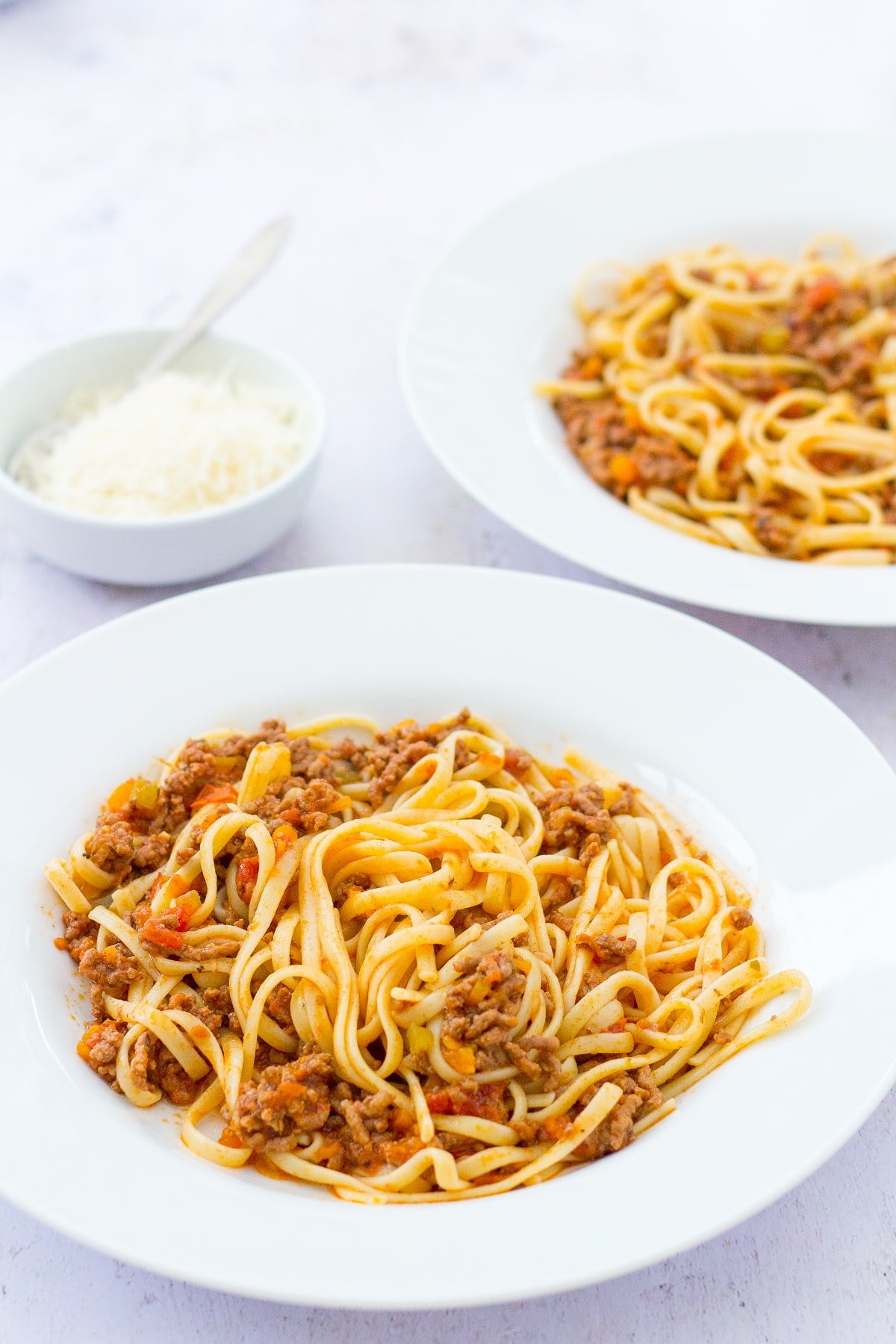 What to drink with pressure cooker bolognese?

To my mind, medium bodied Italian reds work best with this bolognese – something like a Chianti or a Montepulciano d’Abruzzo would be perfect. A Sangiovese (the grape variety in Chianti) from somewhere else, such as the USA or Australia would also work well here.

I wouldn’t really recommend white wine with this recipe, but if it has to be white for you – try a dry Italian white – they work surprisingly well (though no where near as well as a red!)

Can you batch cook this pressure cooker bolognese sauce?

Absolutely – and I encourage you to do so. It freezes brilliantly… or will keep for up to 3 days in the fridge.

A great tip is to make a double quantity, then, on the day you make it, serve it as bolognese.

A few days (or weeks if you freeze it) later, turn the rest of the sauce into a speedy lasagne. Lasagne is one of those things that can take ages to make, but not if you already have a batch of bolognese sauce ready to go! 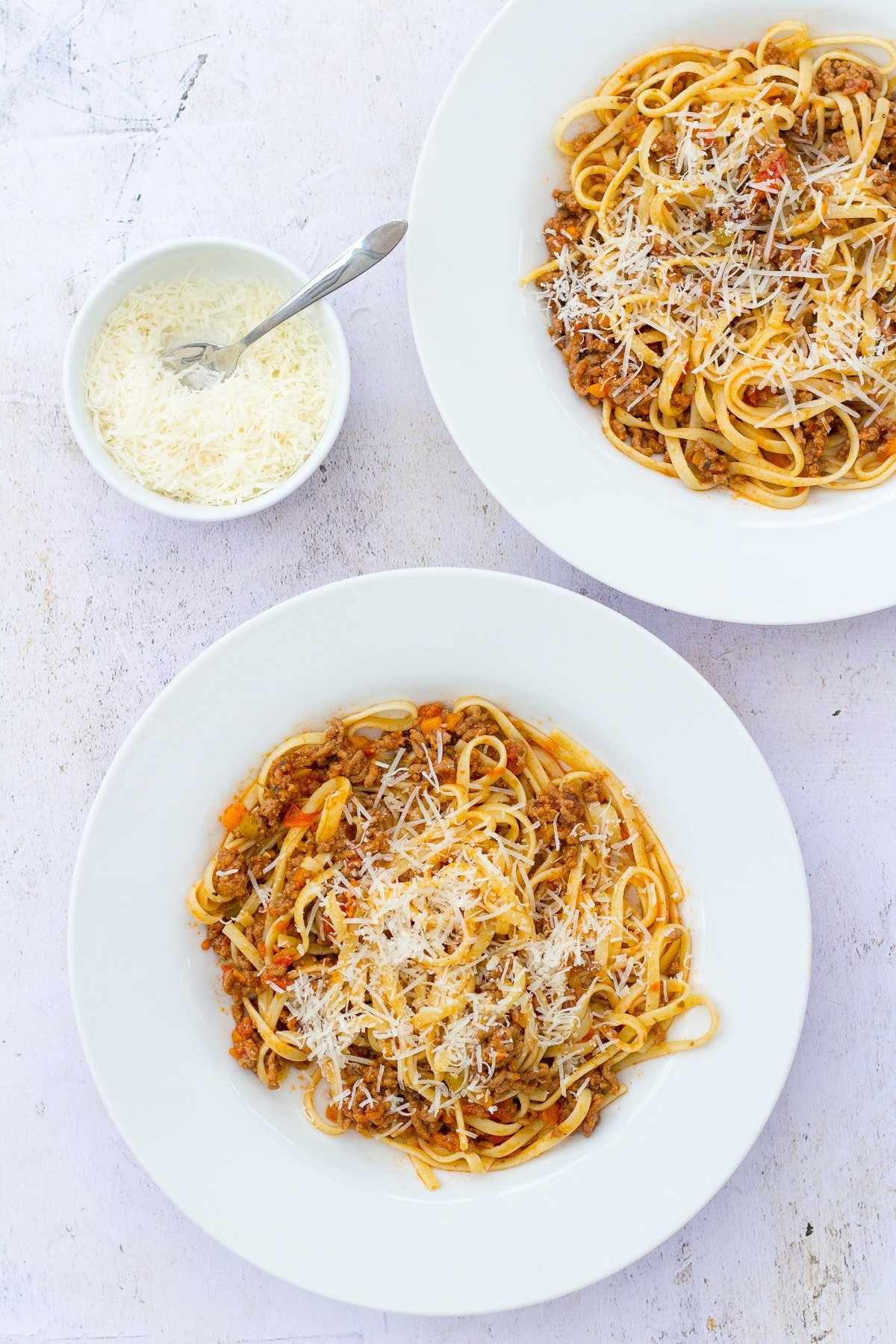 Can you reheat bolognese sauce?

Definitely! If you have any leftover bolognese sauce, simply place it in a plastic lidded container and put it in the fridge (within 2 hours of cooking it). It will keep in the fridge for up to 3 days.

When you come to reheat the sauce, simply place it in a regular saucepan and heat until piping hot all the way through.

Alternatively reheat the bolognese sauce in your microwave until piping hot all the way through.

Can you freeze leftover bolognese sauce?

Of course! Place the leftover bolognese sauce in a plastic lidded container and, when cool, put it in the freezer (ensure you do this is within 2 hours of cooking it). It will keep in the freezer for up to 1 month.

When you want to cook with the bolognese sauce, defrost overnight in the fridge, then reheat as above. 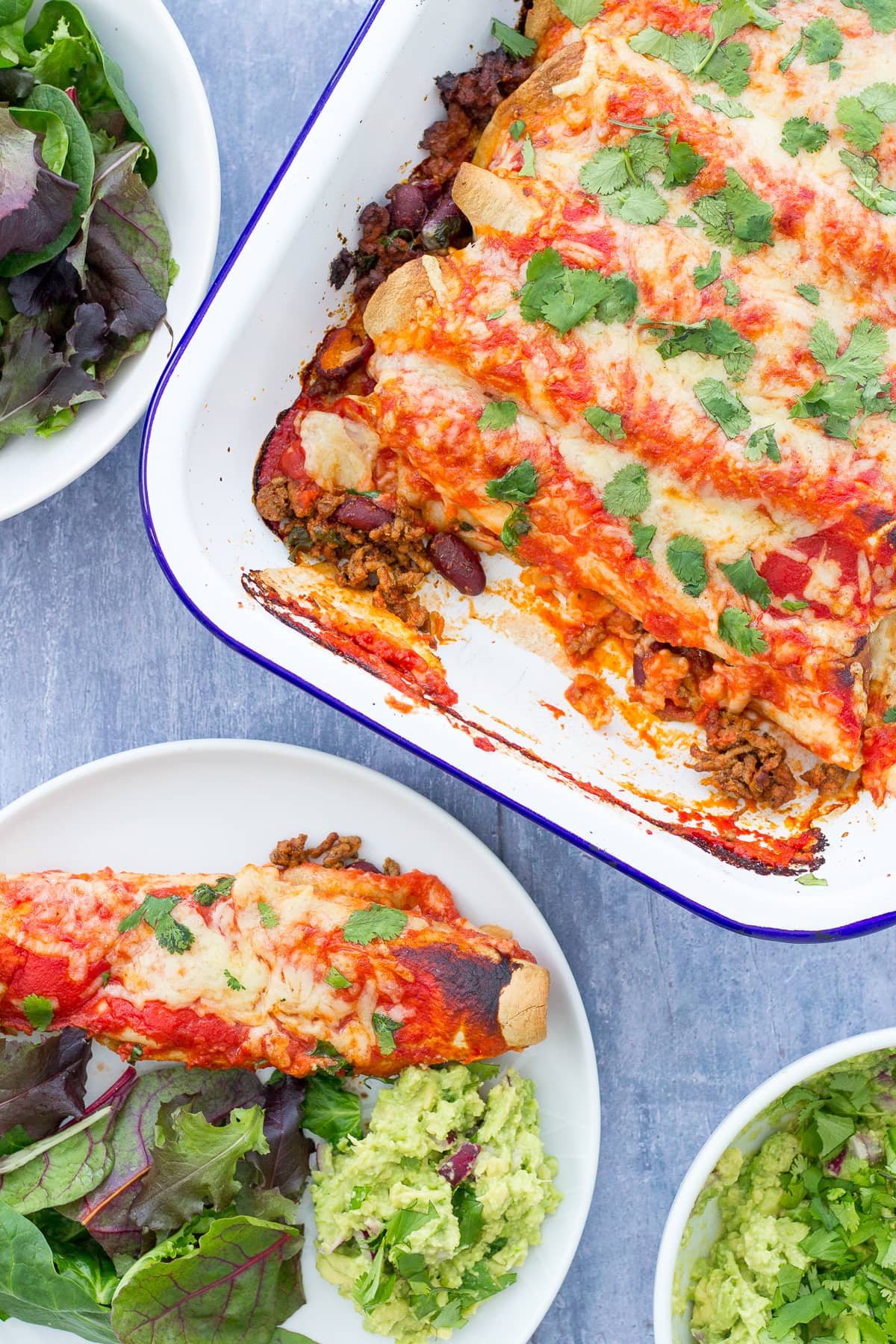 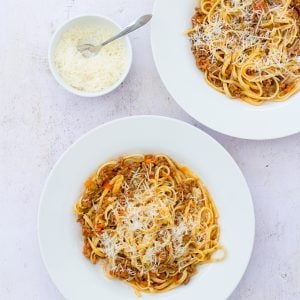 To make life easier, you can replace the onion/carrot/celery with 200g/7oz ready chopped soffritto mix, which can be found in most supermarkets.   This recipe has been written for the Prestige SmartPlus Pressure Cooker (6 litre)*. It should be easily adaptable for any make of pressure cooker, but do always take care to follow the manufacturers guidelines with your pressure cooker!   Suitable for freezing.   Nutrition information is approximate and meant as a guideline only.
Nutrition Facts
Pressure Cooker Spaghetti Bolognese
Amount Per Serving
Calories 361 Calories from Fat 180
% Daily Value*
Fat 20g31%
Saturated Fat 7g44%
Cholesterol 94mg31%
Sodium 633mg28%
Potassium 877mg25%
Carbohydrates 13g4%
Fiber 3g13%
Sugar 6g7%
Protein 32g64%
Vitamin A 2780IU56%
Vitamin C 12mg15%
Calcium 73mg7%
Iron 5mg28%
* % Daily Values are based on a 2000 calorie diet
Tried this recipe?Snap a pic and tag @easypeasyfoodie on Instagram, Twitter or Facebook! 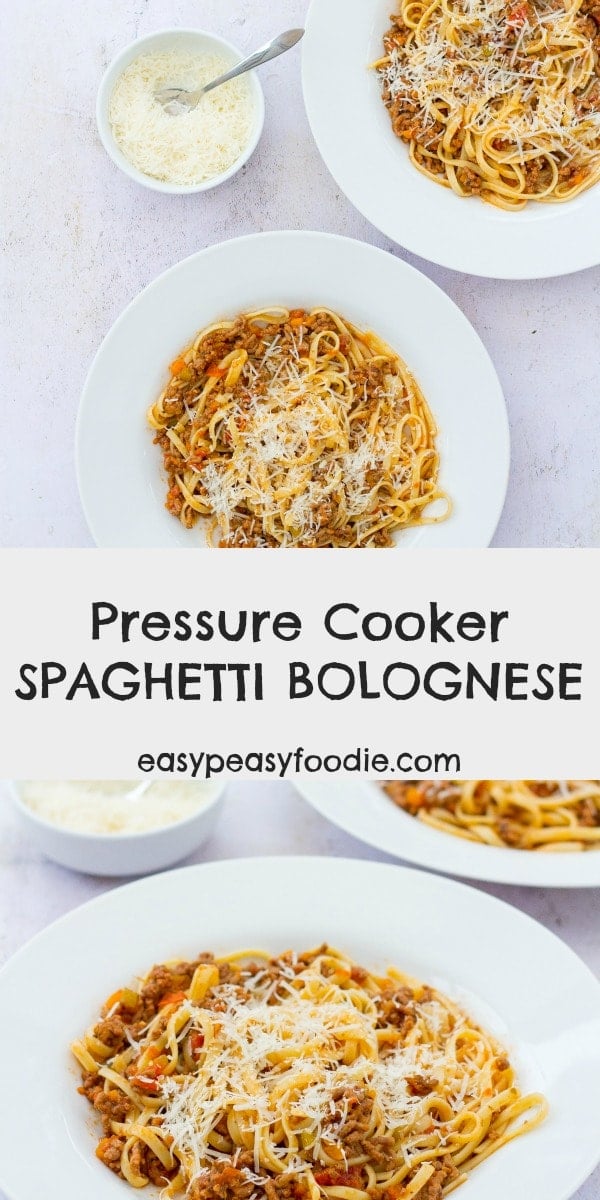 *This blog post contains affiliate links, this means if you click on a link and go on to buy the product I recommend, I will get a small commission, but you will not be charged a penny more – thanks in advance!