Inspired by a lovely recipe in Livia’s Kitchen, these Blueberry Porridge Squares make a fab healthy breakfast or quick snack in a wonderfully portable format. Best of all they are ridiculously quick and easy to make! Forgot the school bake sale? You can have these done and dusted in under half an hour! 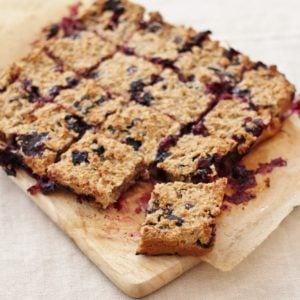 So hands up who was glued to the Great British Bake Off yesterday? I for one certainly was, except Wednesday night is my running night, so I had to watch an hour late! And avoid all social media until it was over! 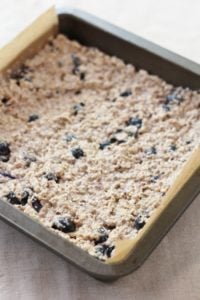 But the thing about the Great British Bake Off is that, however much I love watching it – the banter, the innuendo and those incredible bakes…they are not generally things I would make at home, partly because I am just not that artistic…give me a random selection of veg/meat/fish/store cupboard ingredients etc. and I will make you a delicious main course no problem…but give me a cake to decorate and it will probably end in tears! 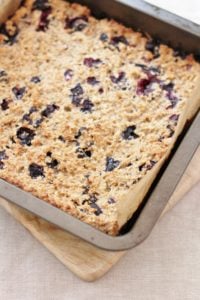 But the other reason is that, how shall I put this, it’s not exactly a show promoting healthy eating! Now, I’m no killjoy, I do occasionally like a slice of cake – and I’m fairly sure I wouldn’t have said no to any of last night’s bakes…but I couldn’t bake like that on a regular basis or I would end up the size of a house! (Really not sure how other more bakey bloggers manage it), plus my husband was recently diagnosed with high cholesterol and so mustn’t have too much cake/biscuits etc., so it would be cruel if I was constantly baking sweet treats.

However, I have been really interested lately in a whole host of bloggers, instagramers and cookbook authors who have set about to make baking more healthy…mmm healthy cake – who doesn’t want a slice of that? One of these bloggers is Olivia Wollenberg of Livia’s Kitchen…I discovered her book recently in the library and I’ve been poring over it trying to learn the secrets of healthy baking ever since. 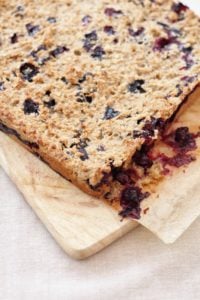 Olivia Wollenberg is the founder of the Livia’s Kitchen brand, which produces sweet treats using simple, healthy and natural ingredients and her book is all about teaching you to reproduce her simple and nutritious cakes, biscuits, puddings and more! It really is an incredible book and I will hopefully be writing a fuller review of it when I have tried a few more of her recipes out. 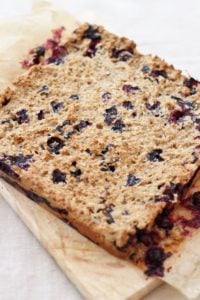 One of the recipes that really caught my eye was for Blueberry Porridge Squares…which are kind of like a healthy version of flapjack – except not exactly, as they include milk, so are squidgier and chewier and not so likely to result in dental surgery as flapjack! 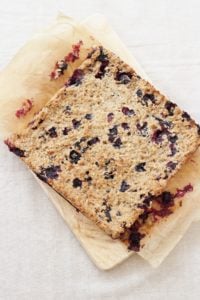 They are super simple to make, containing only 4 ingredients: oats, milk, blueberries and honey and take just 5 minutes to throw together and a further 25 minutes in the oven, meaning they can be done in less than half an hour…perfect for that bake sale you nearly forgot!! 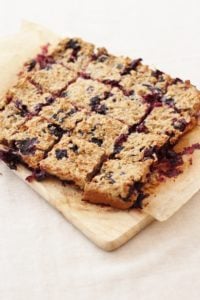 I have adapted Olivia’s original recipe somewhat – I’ve replaced jumbo oats with regular oats, swapped oat milk for normal cows milk and maple syrup for honey. I also didn’t bother with the vanilla extract she put in hers…and used an old fashioned bowl and spoon rather than a blender as she does. So this is not really her recipe in the end, but I just love my adapted version so much, I had to share it with you…if you want to make Olivia’s version you’ll just have to go out and buy the book! 😉

The method maybe super simple but the result is sooo good – chewy, oaty with just the right amount of sweetness and the blueberries kind of go like jam, yum! 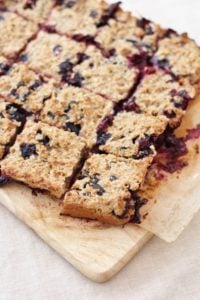 Now these Blueberry Porridge Squares are obviously not as healthy as say, a carrot – they do contain a small amount of sugar in the form of honey, but this is beautifully balanced by the heart healthy, slow release energy of the oats, antioxidant rich blueberries and protein and calcium filled milk and they are certainly a lot more healthy than the majority of Bake Off bakes. I have absolutely no qualms at all about giving these to the kids for a snack and they are absolutely brilliant for a little pre-running snack too – I had one of these before my run last night and I felt like I was flying! But best of all, these would make a fab healthy grab and go breakfast – basically porridge topped with blueberries and a drizzle of honey in a convenient portable format! How genius is that? 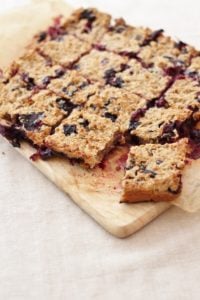 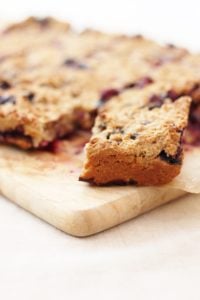 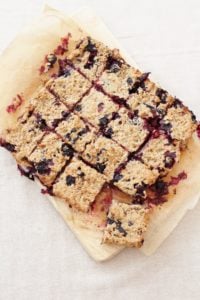 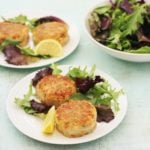 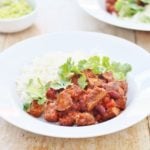 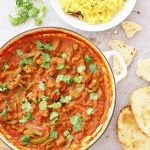