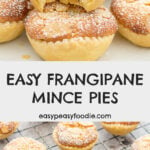 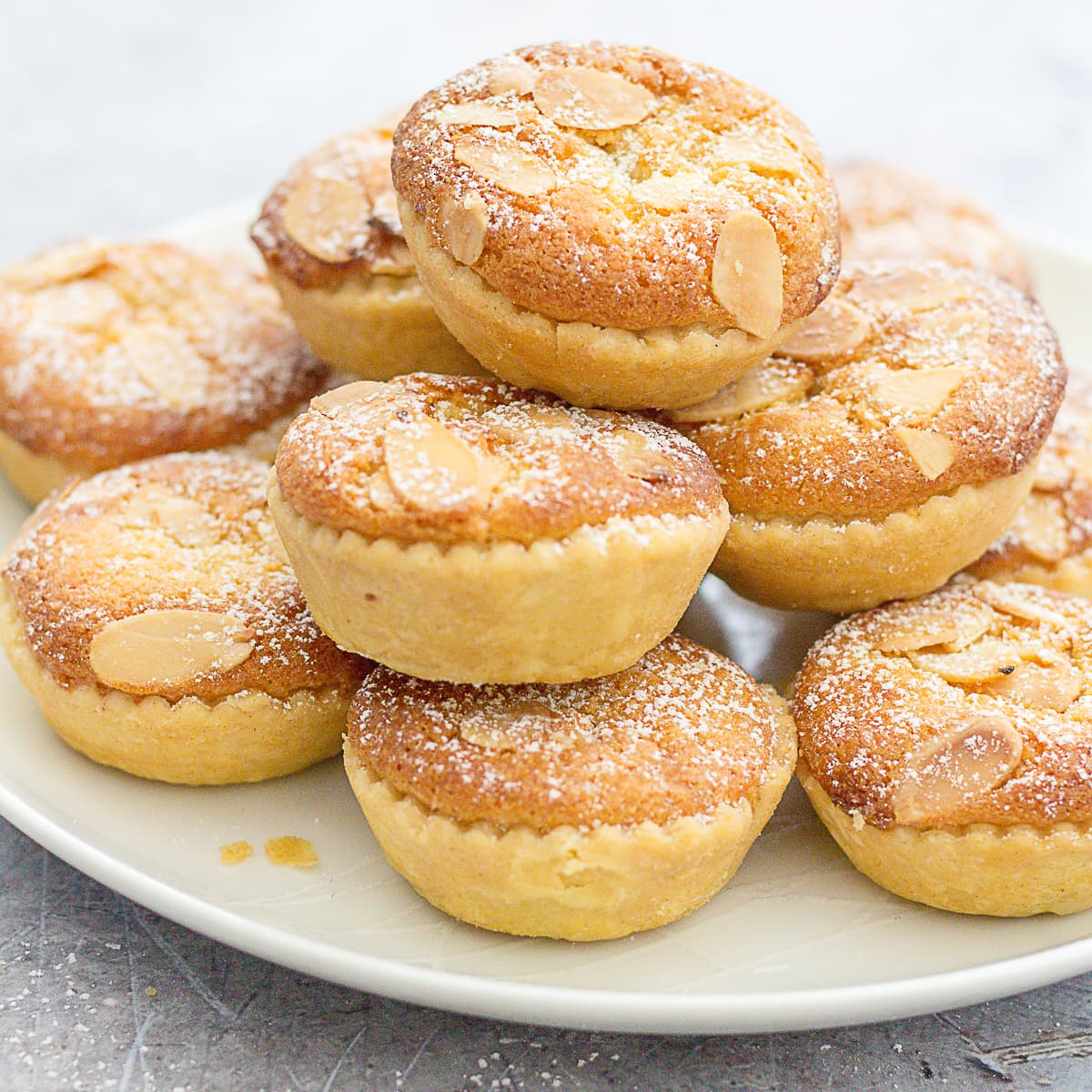 I am a huge fan of mince pies and I always make several batches of my star-topped mini mince pies ever year. However, this year I have been working on a new mince pie variation – my Easy Peasy Frangipane Topped Mince Pies!

These little pies of wonderfulness have a traditional homemade shortcrust pastry bottom, which is then filled with mincemeat and topped with a luxurious frangipane. Finally, I scatter a few flaked almonds on the top for maximum flavour and to add a delicious crunch. (And plus they look really pretty!) 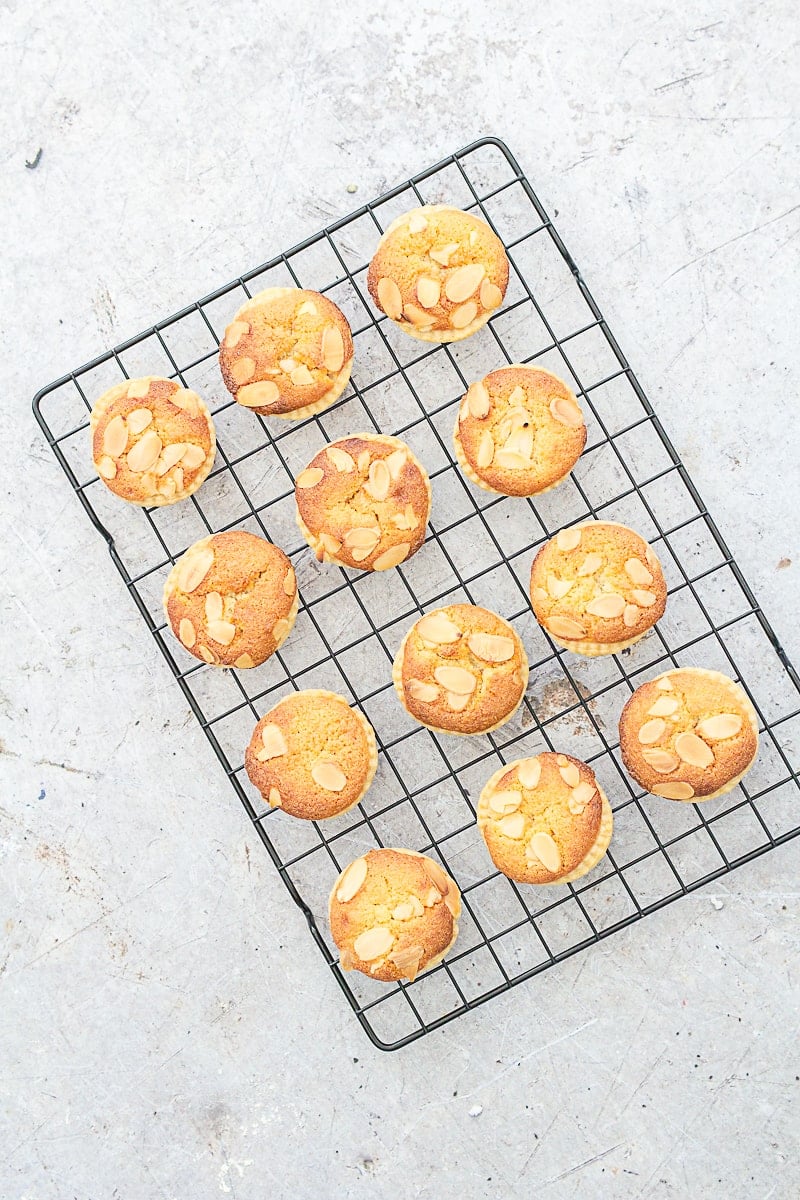 These Easy Frangipane Topped Mince Pies look and taste really impressive but are actually super easy to make. The homemade shortcrust pastry is made from only 3 ingredients: flour, butter and water. (It is so easy to make my kids have been making it since they were about 4 years old!)

The mincemeat is from a jar (promise I won’t tell!) and the frangipane is as easy as making a basic cake mixture – just mix together butter, sugar, an egg and ground almonds (US – almond flour).

Finally, the decoration just couldn’t be simpler… a scattering of flaked almonds and a sprinkle of icing sugar (US – confectioner’s sugar)! 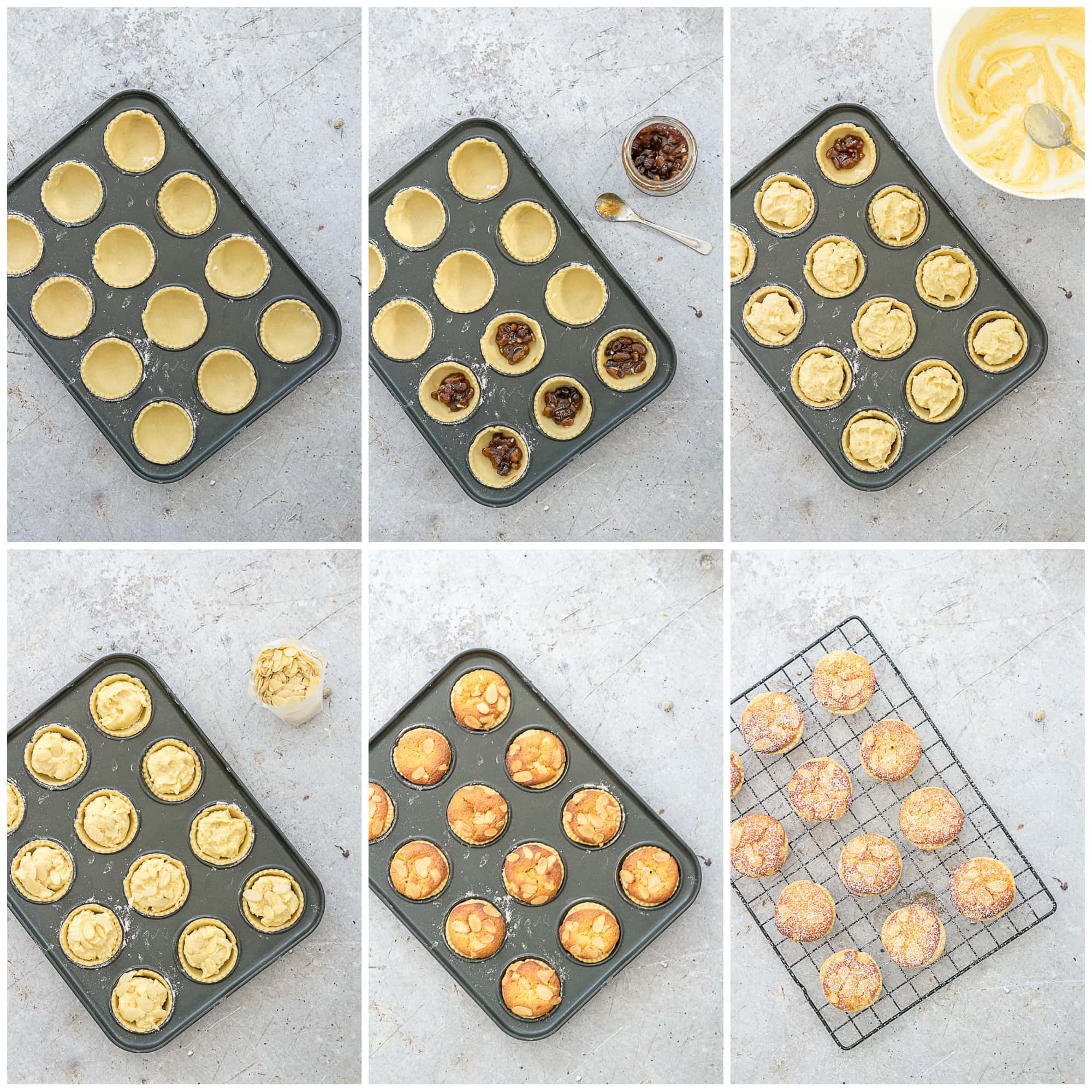 While these easy peasy mince pies might be super simple to make they are utterly moreish – my family demolished these in record breaking time… and my kids just couldn’t get enough of them (despite being initially a little sceptical – haha!)

I am very confident that if you make these for a Christmas party or family gathering, everyone will be very impressed and you will get plenty of compliments… just make sure you make enough, as they will disappear FAST! 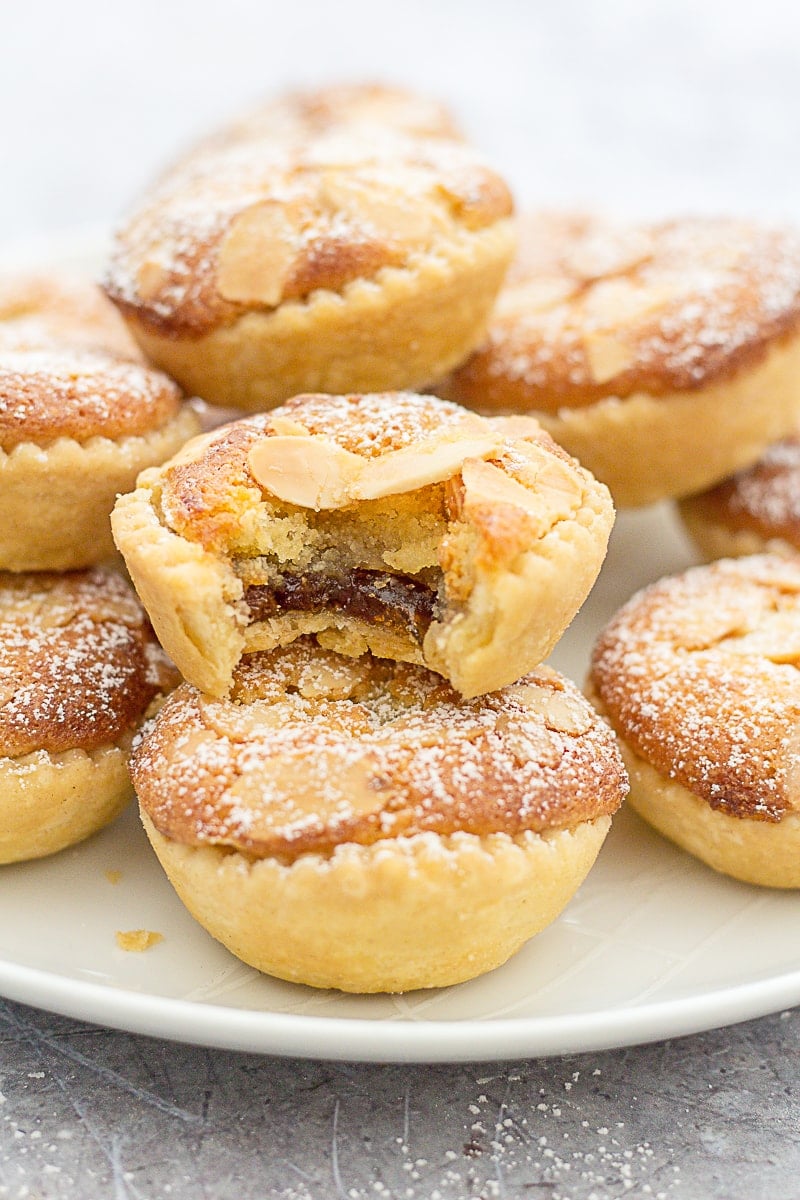 What to serve with frangipane topped mince pies?

These frangipane topped mince pies are delicious on their own, served warm or cold. Alternatively, they are wonderful with custard, cream or ice-cream. And, of course, they are also delicious with brandy butter and brandy cream!

What to drink with frangipane topped mince pies?

I know not everyone is a fan of dessert wine, but I for one LOVE it, and these frangipane mince pies are a great match for dessert wines such as Banyuls, Rivesaltes and Maury. Alternatively, these mince pies go brilliantly with sweet sherry (for example cream sherry) and tawny port… both of which are likely to be knocking around at Christmas time!

Ruby-coloured port (such as LBV or vintage) also goes well, but tawny port is the better match if you have it! 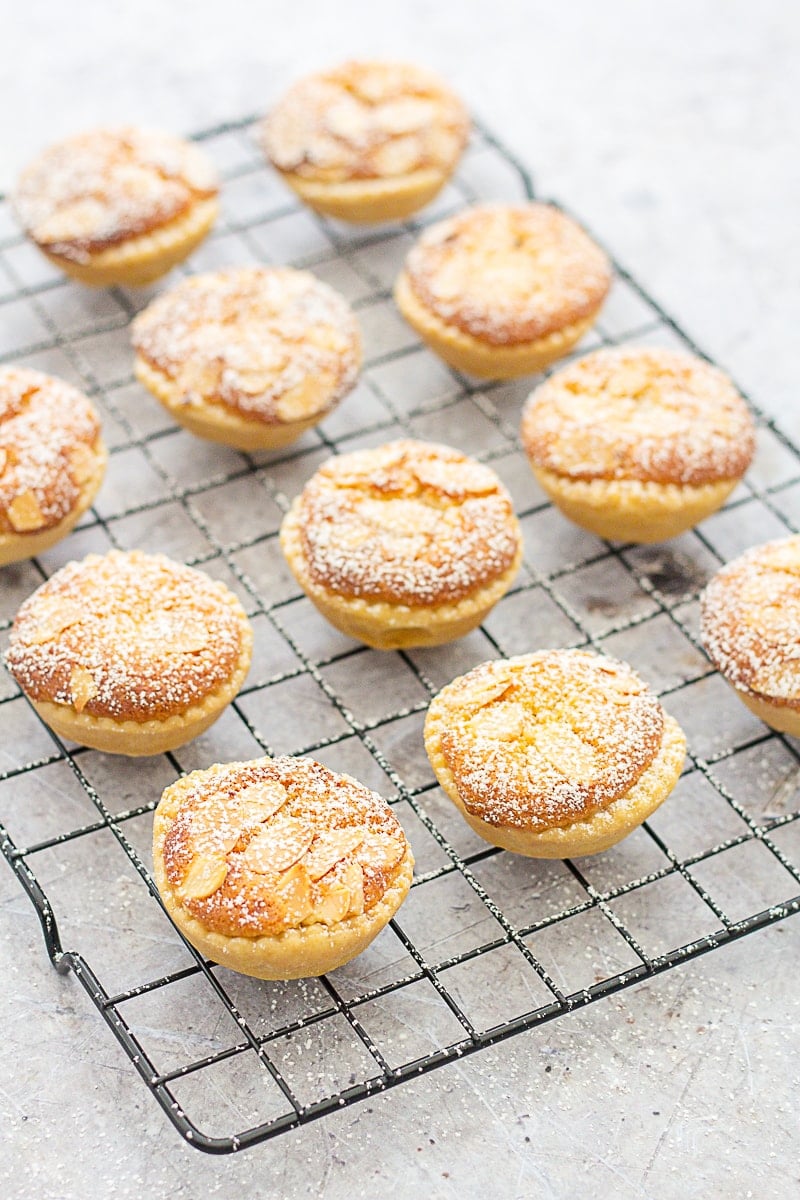 In the very unlikely scenario that you / your family / your friends don’t hoover up these delicious frangipane topped mince pies in a matter of seconds, they will keep well in a airtight tin at room temperature for up to a week.

Can you freeze frangipane mince pies?

Absolutely! Simply place the mince pies in a lidded container in your freezer, where they will keep for up to 6 months. Defrost at room temperature for a few hours before serving. 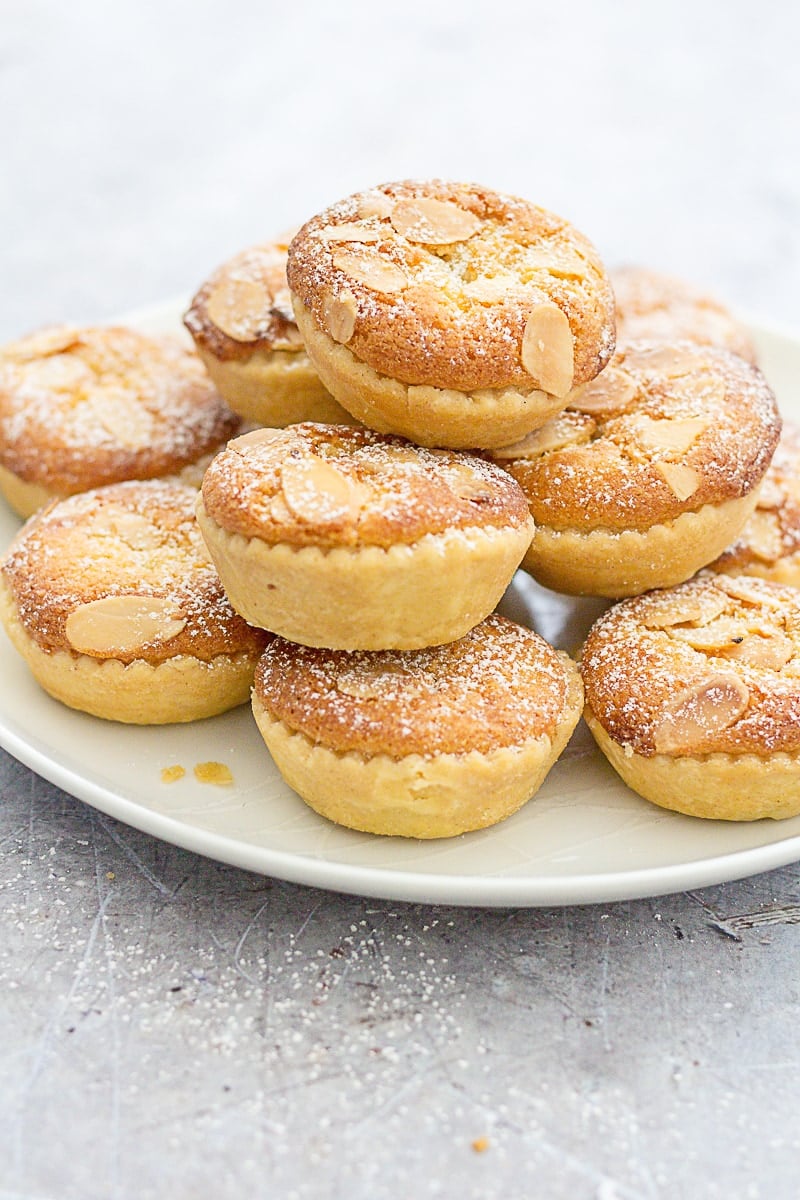 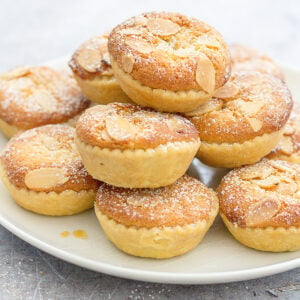 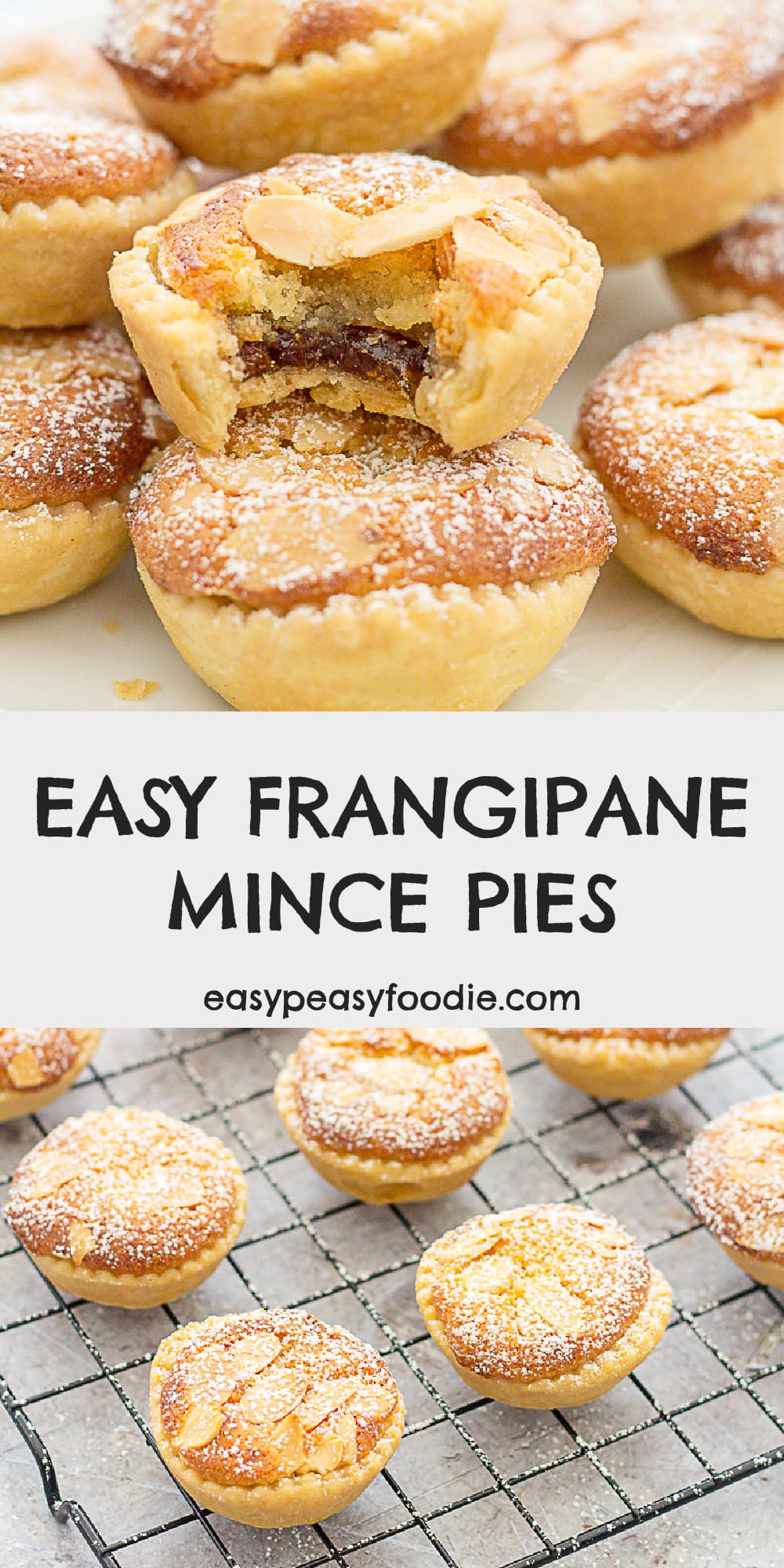