Home » All Recipes » Side Dishes » What is buckwheat and how do you cook it?
396 shares
Jump to Recipe Print Recipe 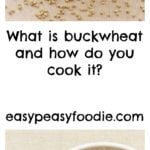 Buckwheat is naturally gluten free, full of nutrients and keeps popping up in fashionable diets all over the place. But what exactly is it? How do you cook it? And does it actually taste nice? 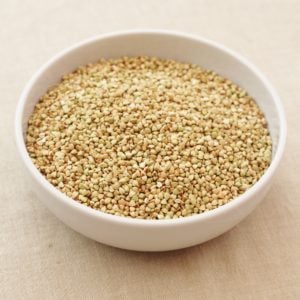 Move over quinoa, there’s a new grain in town! Buckwheat seems to be everywhere at the moment. It’s hugely popular with healthy eating fans, such as Deliciously Ella, Madeleine Shaw and Sarah Britton author of My New Roots. It is also the main carb in the Sirtfood Diet which has taken the celebrity world by storm, recently. (For more about the Sirtfood Diet check out my post on What is the Sirtfood Diet and does it really work?).

Despite its recent rise to fame, buckwheat is actually an ancient grain with a long history. It has been eaten in Asian and Eastern European countries for centuries, but is now becoming increasingly popular in the west due to its many health benefits. 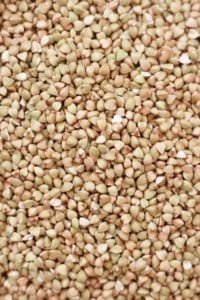 While buckwheat is often thought of as a cereal grain, it is actually a fruit seed that is related to rhubarb and sorrel. However, because its seeds are rich in complex carbohydrates, it is sometimes referred to as a pseudo-cereal.

While it is not a true grain, it can be used like one in cooking and is a delicious alternative to couscous, bulgur wheat, rice and pasta. 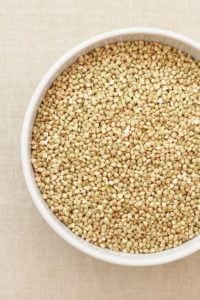 Buckwheat is super healthy, very versatile and, despite its name, it’s not actually related to wheat. Buckwheat is naturally gluten free and should therefore be safe to eat for those with coeliac disease and gluten sensitivities. (Or so the internet tells me – do check with your doctor if you are unsure!) 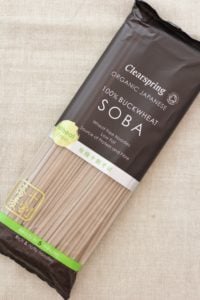 While the pasta, noodles and flour are quite expensive and can be hard to get hold of (try health food shops or larger branches of Waitrose), the buckwheat seeds/grouts are more easily obtainable and relatively inexpensive. I bought this 500g pack of Buckwheat from Tesco for £1.90 and got 12 adult-sized servings out of it. 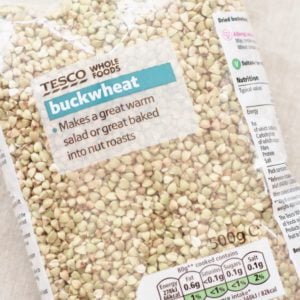 Why is buckwheat so healthy?

Buckwheat is high in protein and fibre. It is rich in many trace minerals, including manganese, magnesium and copper and is a good source of the B vitamins. It also contains  relatively few calories (66 calories for an 80g cooked portion, 40g uncooked) and practically no fat. Buckwheat also ranks low on the glycaemic scale. In fact buckwheat is so packed with nutrients and antioxidants that it is often referred to as a “superfood”.

Diets that contain buckwheat have been linked to a lowered risk of developing high cholesterol and high blood pressure and buckwheat may even help weight loss, reduce food cravings and improve diabetes. 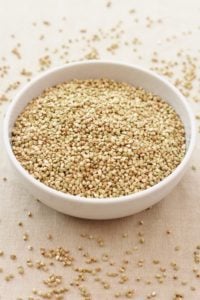 How do you cook buckwheat?

As a result of following the Sirtfood Diet, I have been spending a lot of time cooking buckwheat lately and have therefore had a lot of opportunity for trial (and error!). 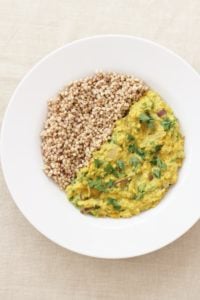 Buckwheat is actually incredibly easy to cook, but my biggest piece of advice would be: don’t follow the packet instructions!!! The instructions on my packet of Tesco Buckwheat advised me to cook it for 30 minutes – well, after 20 minutes it was a horrible disgusting tasting mush. Goodness knows what would have happened after 30 minutes! And just by way of contrast, on the packet of identical looking buckwheat from Waitrose it says to cook the buckwheat groats for 8 minutes!

And when you try and google ‘How to cook buckwheat’ there are so many different answers and complicated recipes, it’s tempting to give up. 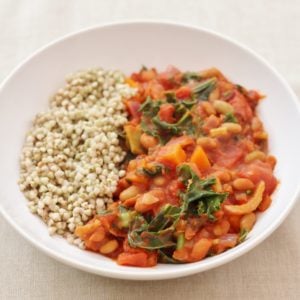 A good deal of experimentation later and I have a very simple formula. Cook the buckwheat for 10 to 15 minutes in plenty of boiling water and drain. That’s it.

Whether you cook it for 10 or 15 minutes, I would suggest is a matter for personal taste – a bit like pasta. I like pasta done al dente and buckwheat the same, so I do mine for 10 minutes, but if you like your pasta a little softer, I suggest you should cook buckwheat a little longer. 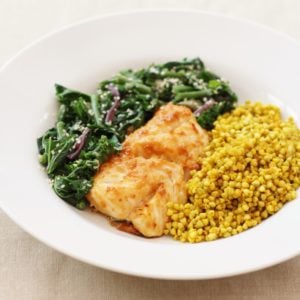 If you want to add a little extra taste to your buckwheat, try toasting it in the dry pan for 2 to 3 minutes first before adding the boiling water, this will give you some extra nutty flavours and a richer, deeper taste – but is not necessary if you are in a hurry. (Also, do be careful when adding the boiling water to the pan that’s been toasting the buckwheat – it’s liable to bubble up like a volcano!).

Should you rinse buckwheat? I did rinse my buckwheat after cooking it to begin with, but actually found in the end that it wasn’t necessary so long as a) I didn’t cook the buckwheat for too long and b) I used enough water to cook it in. I found when I tried the absorption method, like I usually do for rice, it did need rinsing afterwards, but by boiling it in plenty of water (like pasta) it was fine and didn’t need rinsing afterwards. I found rinsing beforehand didn’t really seem to achieve anything so I stopped doing it. 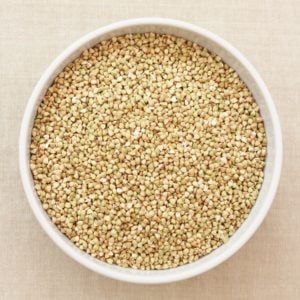 Cooked buckwheat can be stored in the fridge for up to 3 days, making it a great one to cook up a big batch and use for various salads throughout the week.

Cooked buckwheat can be frozen too. Simply place it in a lidded plastic container and pop it into the freezer, where it will keep for up to 3 months.

Yes! Or at least I think so, but I have found it is a bit of an acquired taste. The first time I tried buckwheat, I thought it was horrible! But then that was the time I cooked it for 20 minutes until it was an unappetising mush! The more I have eaten it, the more I have enjoyed it and now I absolutely love it and am happily eating it more or less every day! So I would encourage you to persevere if you don’t like it at first. 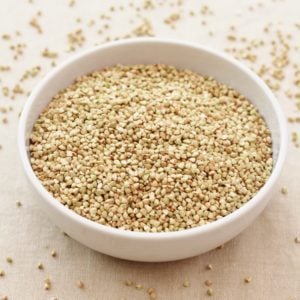 What do you do with buckwheat? 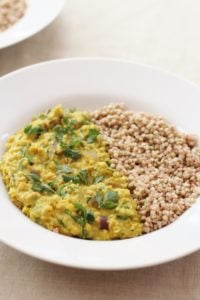 Want to know more about the Sirtfood Diet?

Check out these posts…

How to cook buckwheat groats

Buckwheat is naturally gluten free, full of nutrients and keeps popping up in fashionable diets all over the place. But what exactly is it? How do you cook it? And does it actually taste nice?
Prevent your screen from going dark
Course Side Dish
Cuisine British
Prep Time 5 minutes
Cook Time 10 minutes
Total Time 15 minutes
Servings 4 people
Calories 137kcal
Author Eb Gargano

« What is the Sirtfood Diet and does it really work? Part 2
Kale and Red Onion Dhal with Buckwheat (Vegan) »